Atlanta, Georgia (UroToday.com) Dr. Daniel Lin from Seattle, Washington, presented his second talk of the day on "Prostate Tissue Molecular Profiling: Which, When, and Why?".

Dr. Lin started his talk by showing the National Comprehensive Cancer Network (NCCN) guidelines for breast cancer, where molecular markers dictate the treatment that a patient receives. However, in the NCCN guidelines for prostate cancer, there is no biomarker-driven algorithm.

Dr. Lin first discussed the ConfirmMDx test, which takes advantage of epigenetic changes in the tissue such as histone modification, chromatin remodeling, and DNA methylation (GSTPi, APC, RASSF1). He highlighted the MATLOC study by Stewart et al., which looked at around 500 men with previously negative biopsy. These men underwent repeat biopsy within 30 months resulting in the ConfirmMDx having a negative predictive value (NPV) of 90%. Another follow-up study by Partin et al. had similar results. A recent study published in 2016 looked at high-grade prostate cancer and examined the degree of methylation. ConfirmMDx outperformed the prostate cancer prevention trial (PCPT) risk calculator, with NPV of 96% and 30% reduction in additional biopsy.

Dr. Lin then highlighted the Prolaris® test by Myriad, which is based on 31 gene cycle progression from the biopsy tissue. Prolaris® can look at various endpoints such as prostate cancer-specific mortality (PCSM), biochemical recurrence in post-radical prostatectomy cohort, and decision-making for treatment choice. Prolaris® assigns a more precise measurement of possible recurrence, and the Prolaris® report shows the American Urological Association (AUA) risk category, 10-year mortality risk, active surveillance threshold, and 10-year metastasis risk. He also highlighted a study by Dr. Neal Shore published in 2016, which evaluated the impact of physicians' treatment decisions in a prospective registry where almost half the patients decrease the intensity of treatment across all AUA risk categories.

Dr. Lin then reviewed the Oncotype DX® test, a 17 gene test, and looks at multi-pathway signatures, such as stromal response, androgen signaling, cell organization proliferation, and the source of tissue is again biopsy tissue. The endpoint for Oncotype DX® is slightly different and looks at adverse pathology such as upgrading or upstaging. Oncotype DX® genomic prostate score (GPS) report again gives GPS+NCCN score, 10-year PCSM, 10-year metabolic syndrome (MetS) risk, and adverse pathology risk. There have also been decision-making studies based on Oncotype DX®, which show that most of the recommendations are confirmed, but 25% decreased or increased the treatment intensity.

The last biomarker reviewed by Dr. Lin was Decipher®, which is a 22 gene multi-pathway signature based on biopsy tissue. The endpoints are high-grade disease, metastasis after radical prostatectomy, and PCSM. He highlighted a study by Ross et al., which showed their genomic classifier score of high increases the chance of metastasis by 50%. Decipher® has also looked at which group will benefit from earlier adjuvant radiation instead of waiting for prostate-specific antigen (PSA) recurrence, and higher Decipher® scores benefitted from earlier adjuvant radiotherapy (RT) versus salvage RT. The Decipher® score's output shows a percentage likelihood of high-grade disease, metastasis at five years, and PCSM at ten years. Decision making based on the Decipher® score in the PRO-IMPACT trial showed that over 35% changed treatment and lowered anxiety related to the treatment across all risk groups.

In summary, all the tests have various levels of validation and have been tested across heterogeneous populations, but no active surveillance cohort has been robustly tested. All the tests have several decision-making studies associated with them, but limited financial impact studies have been performed.

Dr. Lin then ended his talk with some take-home points, shown in the slide below. 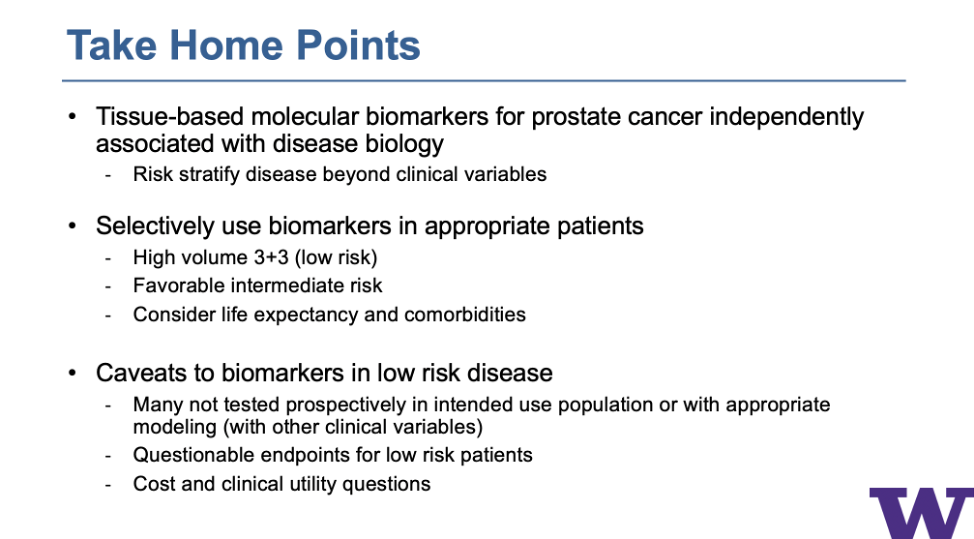