Atlanta, Georgia (UroToday.com) At the first in-person conference in urology since the COVID-19 pandemic shutdown happened in March 2020, Dr. Daniel Lin from Seattle, Washington, was the first speaker after the welcome and introductions delivered by Drs. Herbert Lepor and Neal Shore. He presented on "Smarter Prostate Cancer Screening: Who to and Who Not to Biopsy?".

Dr. Lin started his talk by summarizing the ideal biomarker characteristics such as being easily reproducible, having a low cost, and having high sensitivity and specificity. The other important measure is defining the test's performance measures, such as diagnosis versus prognosis.

Dr. Lin stressed that negative predictive value is the essential characteristic of a biomarker and determines the need for biopsy or re-biopsy. He summarized the biomarkers available at every stage of prostate cancer from elevated prostate-specific antigen (PSA) to advanced disease, as seen in the slide below. 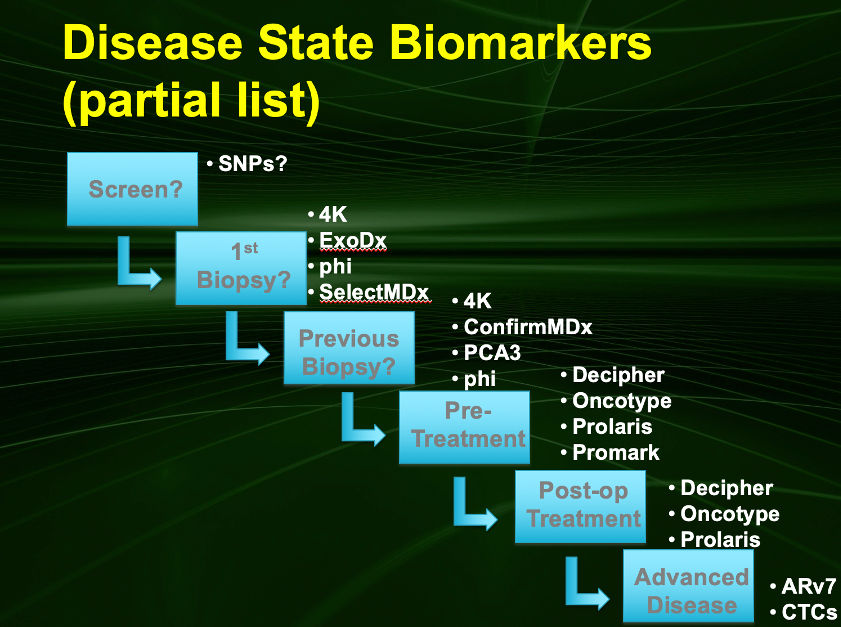 Dr. Lin then highlighted the PHI score study from Catalonia et al., which showed a high PHI score predicted a higher probability of prostate cancer. He also highlighted a study by Lughezzani et al., which showed that PHI is better than percentage-free PSA. He then summarized multiple studies showing that PHI score works in both biopsy-naïve and repeat biopsy setting and has low assay variability. There are also studies showing that the PHI score is associated with aggressive disease at prostatectomy.

Dr. Lin then discussed the 4K score, which also has low variability, and adds kallikrein protein in the algorithm, including age and digital rectal examination (DRE). It also improves the diagnosis of prostate cancer across screening and patients with elevated PSA. Both PHI and 4K score reduce biopsy by 30% and correlate with high-grade cancer and poor pathology at radical prostatectomy. He summarized several retrospective studies that looked at 4K scores, and high area under the curve (AUC) scores were noted. He then highlighted a study that compared 4K score with prostate cancer prevention trial (PCPT) 2.0 nomogram and showed that 4K score outperforms the PCPT risk calculator. Multiple studies have compared 4K to PHI scores, and they have similar performance for any cancer and high-grade cancer. They both reduce the biopsy rate by 30% and may cause a potential delay in diagnosing 10% high-grade cases.

Dr. Lin then moved on to urine-based markers. PCA3, which is independent of prostate volume, and correlates to grade and tumor volume. There is again low assay variability, and the source is post-DRE urine-based assay. A pivotal study was performed by Wei et al., which showed that PCA3 score above 60 has a very high patent processus vaginalis (PPV). The negative predictive value (NPV) was highest in previous negative biopsy patients who present for repeat biopsy. If the PCA score <20, the NPV was almost 90%. PCA3 has been combined with T2: ERG and showed it was better than PCPT and PSA. He then discussed SelectMDx, which again evaluates post-DRE urine for mRNA levels of HOXc6 protein, DLX1, and TDRD1. The endpoint was high-grade prostate cancer, and it reduces the biopsy rate by approximately 50%. The NPV was 93-94% for high-grade prostate cancer and is now on the National Comprehensive Cancer Network (NCCN) guidelines.

Dr. Lin then discussed the NCCN guidelines and stressed on the footnote, which highlights that men in their 40s and 50s should have PSA <1, men aged >60 with serum PSA <1 and men aged >75 with PSA <3, have a very low risk of metastasis in their lifetime. Consideration of biomarkers and MRI is also now included in NCCN guidelines.

Dr. Lin then highlighted smart screening strategies that his group had published in 2013 looking at biennial screening or age-specific screening. PSA >1 at age 44-50 is associated with a 3.7x increased risk of clinically detectable prostate cancer and 7-22x risk of advanced disease by age 75. Some studies have shown that a PSA threshold of 1.5 should trigger biomarkers and biopsy-based on biomarker tests.

Dr. Lin then summarized his talk with key points, as shown in the slide below. 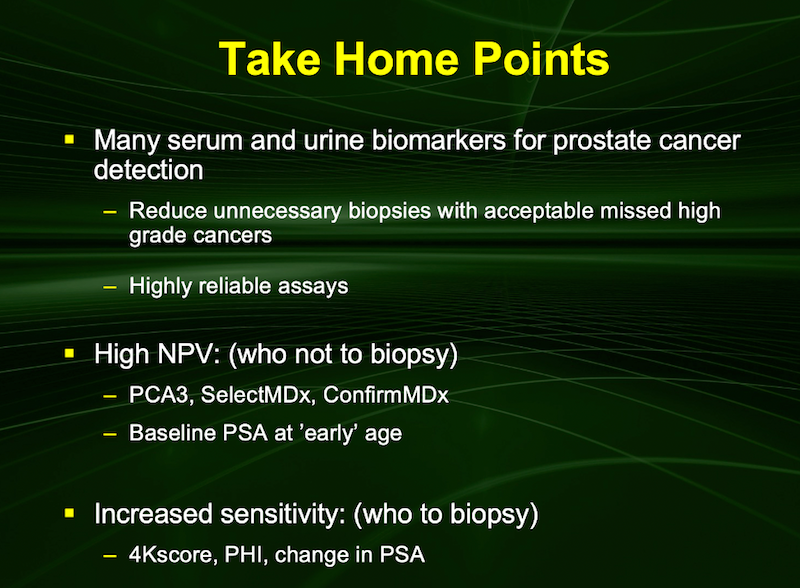