This website uses cookies to ensure you get the best experience on our website. Privacy Policy
(UroToday.com) The American Urological Association (AUA)’s Drug Development in non-muscle-invasive bladder cancer (NMIBC) From Scientific, Regulatory, Clinician, and Patient Perspectives virtual meeting featured a keynote lecture presentation by Dr. Adam Palmer discussing the science of combination therapy. Dr. Palmer notes that one of the limitations of monotherapy is tumor heterogeneity. Specifically, inter-patient heterogeneity suggests that monotherapy works for some patients and does not for others, whereas intra-tumor heterogeneity suggests that monotherapy kills some cancer cells but not all cancer cells.

In 2017, Dr. Palmer’s group showed that combination cancer therapy can confer benefit via patient-to-patient variability without drug additivity or synergy.1 In a combination exhibiting independent drug action, each patient benefits solely from the drug to which their tumor is most sensitive, with no added benefit from other drugs. Even when drug combinations exhibit additivity or synergy in pre-clinical models, patient-to-patient variability and low cross-resistance make independent action the dominant mechanism in clinical populations. As such, the independent action of treatment explains the activity of combination therapy, in that the expected survival distribution is associated with drug A plus patients who did not response to drug A, multiplied by those who may response to drug B, multiplied by the cross resistance (signifying a smaller benefit): 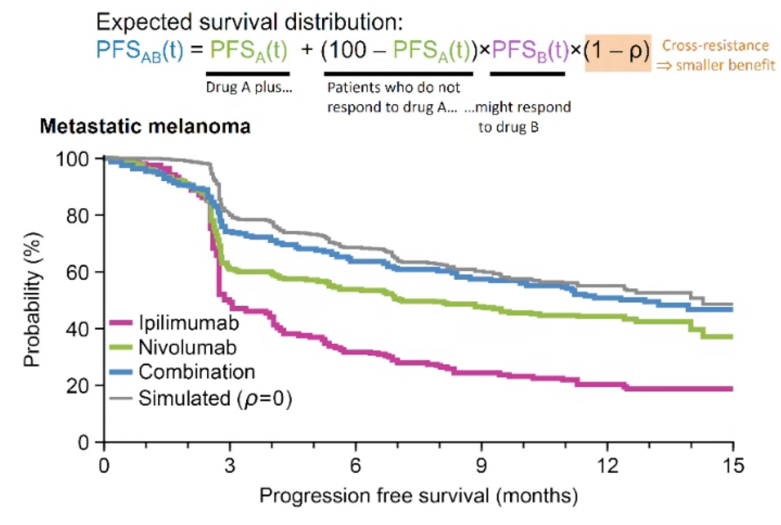 Additionally, Dr. Palmer’s group found that the clinically observed benefits of recently reported and approved combination therapies with ICIs are fully and accurately accounted for by increasing the chance of a single-agent response in individual patients (drug independence), with no requirement for additive or synergistic efficacy.2 As such, the likely anti-tumor efficacy of new ICI combinations can be predicted if monotherapy data are available. To conclude the section discussing the role of inter-patient heterogeneity, Dr. Palmer notes that (i) combinations of individually active agents give patients more changes of response, (ii) when cross-resistance is low, this can substantially improve survival, (iii) clinical activity of combinations can be often be predicted from monotherapy activities, (iv) a drug independence model can identify additive or synergistic effects in clinical trials, and (v) when synergy is absent, similar efficacy may be possible with sequential therapy.

With regards to intra-tumor heterogeneity, Dr. Palmer’s group used isobologram analysis to score pharmacological interaction, and clone tracing and CRISPR screening to measure cross-resistance among the five drugs comprising R-CHOP, a combination therapy that frequently cures diffuse large B-Cell lymphomas.3 In this study, they found that drugs in the R-CHOP regimen exhibit very low cross-resistance but not synergistic interaction, thus providing evidence that a curative cancer therapy can be constructed on the basis of independently effective drugs having non-overlapping mechanisms of resistance, without synergistic interaction. Dr. Palmer concluded this section of his talk noting that combinations of independently active therapies can overcome intra-tumor heterogeneity, and increase fractional cell kill. Furthermore, drug activity is experimentally confirmed for several curative combination therapies.

In the final section of his talk, Dr. Palmer notes that there are several questions and implications for clinical trials of combination therapy. One question is whether we need combination therapy for every patient? Dr. Palmer states that no we do not if we could predict which patient will respond to certain therapies. However, given the uncertain knowledge of what will work for an individual, combination therapies can provide a ‘bet-hedging’ benefit that is clinically meaningful. In his opinion, there are two classes of biomarkers that will find patients that are most likely to derive benefit from the combination therapy, including those that respond poorly to standard of care, and those that respond well to new therapies. A second question is whether impressive clinical trial data are related to the synergistic and additive effect of the study combination or would the results be the same with sequential use of the two drugs? Dr. Palmer notes that when synergy is absent, the potential of sequential therapy depends on whether all patients can make the switch and whether the second therapy is similarly effective when used as a second-line treatment. If some patients are unable to receive a second-line therapy, a combination treatment approach guarantees them access to both therapies. Furthermore, curative combination therapy depends on the contemporaneous use of multiple therapies. With regards to questions designing combination therapies, is monotherapy activity always necessary? Dr. Palmer states that yes, monotherapy activity is nearly always necessary, but monotherapy activity can be inferior to standard of care and still provide benefit. However, biomarkers to enrich for responsive subgroups of patients will be helpful. Finally, is synergistic interaction (“mechanistic rationale”) necessary? According to Dr. Palmer, the answer is no as monotherapy activity is a demonstrably sufficient rationale for many clinically effective combinations. Synergy sometimes provides further benefit, but if independent activity does not predict success, trial failure is highly likely: 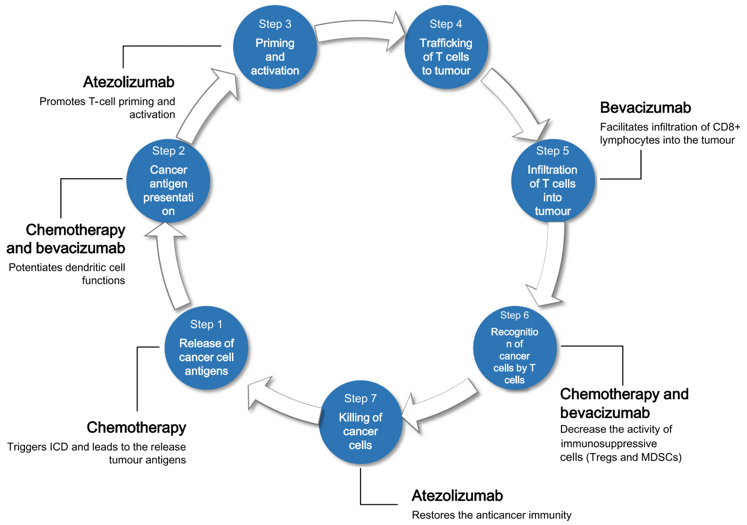