(UroToday.com) Most patients newly diagnosed with bladder cancer have non-muscle invasive disease (NMIBC). For patients with intermediate or high-risk NMIBC and those with carcinoma in situ (CIS), adjuvant treatment with BCG is guideline-recommended on the basis of proven benefits in disease recurrence. While BCG is efficacious, many patients eventually develop BCG-unresponsive disease. For many years, there have been very limited options for these patients. While radical cystectomy has remained the gold standard for many years, there is significant interest in developing novel approaches (both initially and following BCG) which will allow patients to keep their bladders.

To this end, the Johns Hopkins Greenberg Bladder Cancer Institute and the American Urological Association held a Translational Research Collaboration entitled “Drug Development in NMIBC from Scientific, Regulatory, Clinician, and Patient Perspectives”. In this symposium, two keynote speakers were invited. The second of these talks was from Dr. Brawley who addressed issues of racial disparities in clinical trials.

He began by emphasizing that we often jump to performing or reading trials, without considering their goals. Clinical trials, whether assessing issues of prevention, screening and diagnosis questions or therapeutic interventions, always attempt to answer a question about an intervention with a differing scope of question from phase 1 through phase 3 trials.

However, in the context of clinical trials, he emphasized the importance of considering not just the efficacy of an intervention (i.e. how well it works in a study setting) but also it’s effectiveness (i.e. how well it works in the real-world population). Further considering how we man apply data from clinical trials, he emphasized questions of generalizability, relating to how well the findings apply to populations we are interested in, as well as applicability.

Demonstrating issues of generalizability of trial findings, Dr. Brawley highlighted the healthy volunteer effect in which individuals who participate in clinical trials are generally healthier and have lower mortality than the general population. As an example, he highlighted the PLCO trial of cancer screening in which the enrolled volunteers had all cause mortality that was 43% of the age-comparable general population. Lower death rates were noted for cancer-, cardiovascular-, respiratory-, and digestive-related disease. Thus, Dr. Brawley suggested that large, simple trials with minimal inclusion criteria would minimize this effect.

Dr. Brawley then moved to discuss the concept of disparities in health. Broadly speaking, this is the concept that some population (defined on the basis of a variety of characteristics) have worse outcomes than others. These populations may be defined on the basis of sex or gender, tribe or family, race, ethnicity or culture, area of geographic origin, socioeconomic status, education, income, or region of residence. The outcomes may be measure of incidence, mortality, survival, or quality of life.

Dr. Brawley emphasized that while racial disparities are often examined, race is a sociopolitical, not biological, construct which determines risk and environment. He emphasized that, among the known risk factors/causes of cancer in the U.S., obesity and smoking are disproportionately distributed among socioeconomic and sociopolitical groups. 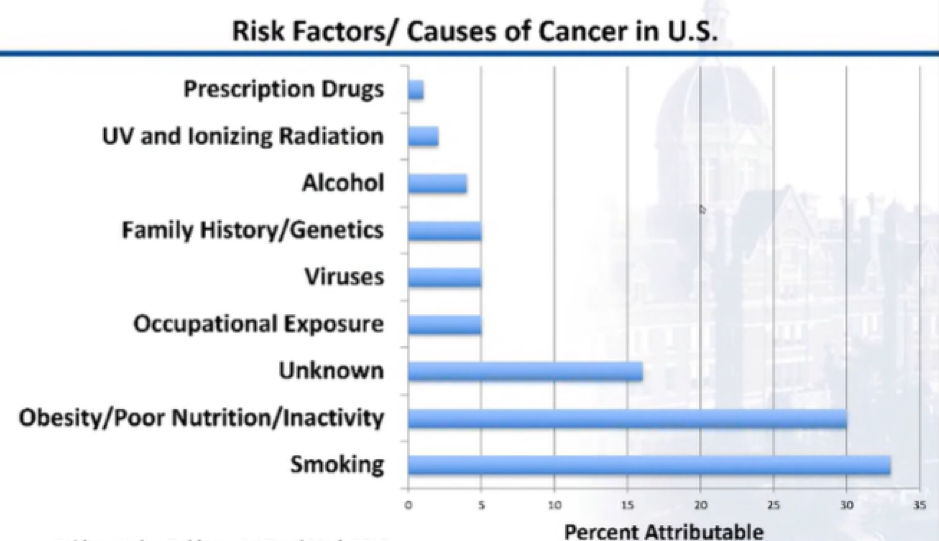 Dr. Brawley then emphasized evidence of differences in the quality of interventions received between populations. For example, he highlighted that there are differences in the number of polyps detected on colonoscopic colon cancer screening. This suggests that gaining access to screening tests is insufficient to address disparities in care. 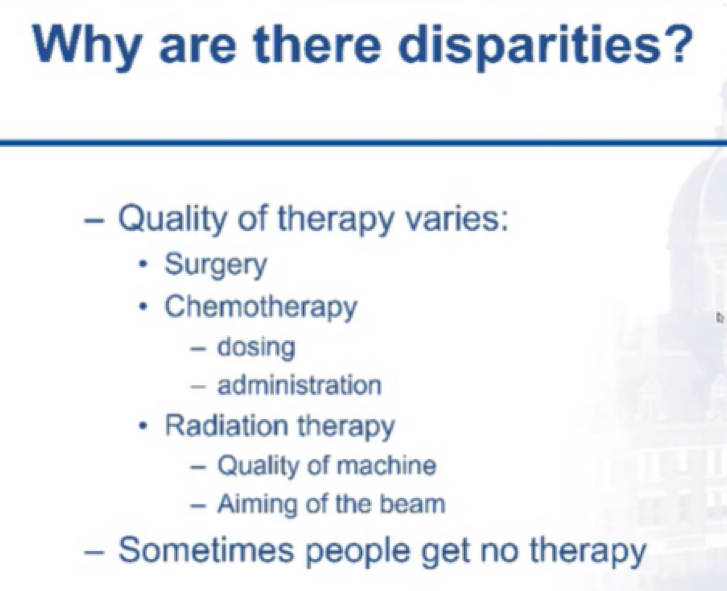 He then highlighted data from breast cancer based on modeling from CISNET which demonstrated that, among the 45,000 women who die annually of breast cancer, 10% could be averted by better adherence to accepted screening guidelines while 20-27% of deaths could be averted by delivery of appropriate treatment among patients diagnosed with breast cancer. Further to this, he highlighted data from Dr. Lund demonstrating that 7.5% of Black women in Atlanta diagnosed with localized breast cancer in 2020 did not receive appropriate curative intent surgery within 2 years of diagnosis. A similar issue affected 3% of white women. Overall, the socioeconomically disadvantaged were more likely to receive poor care. Thus, Dr. Brawley emphasized that improving care for these patients, through the provision of adequate care, is a logistical issue and not new medical science.

Dr. Brawley then emphasized that many believe disparities in racial/ethnic minorities exist due to a lack of inclusion in clinical trials. This belief formed the basis of the NIH Revitalization Act of 1993. However, Dr. Brawley emphasized that it is rare that a drug does not work in minority groups, rather it is an issue that more often the drug is not given. Such a belief is supported by data that suggest that disparities in treatment are due to: 1-cultural differences in the acceptance of therapy; 2-disparities in comorbid diseases which may render patients ineligible for treatment; 3-a lack of convenient access to therapy; and 4-racism and socioeconomic discrimination.

Dr. Brawley emphasized that much of the discussion of disparities in inclusion in clinical trials in political, rather than scientific, in origin. As a result, the NIH Revitalization Act calls for subset analyses among races and ethnicities included in trials on the assumption that proportional representation would allow for valid subset analyses, ignoring power issues. Beyond access to specific trials, involvement in trials generally provides greater assurance of overall high-quality care. As a result, all patients, and especially racial and ethnic minorities, should be encouraged to participate in clinical trials.

Dr. Brawley emphasized the recent AMA Statement on Race which emphasized that race is not a biologic categorization, but rather a sociopolitical construct. He further suggested that area of geographic origin may be a biologic classification but that this can be very complicated. Clearly and unequivocally, he stated that we must be careful not to allow our use of race to propagate institutional racism.

Using the example of colon cancer, he emphasized how socio-economic disparities in care may lead to the incorrect inference of biologic differences: Black, Hispanic and poor populations are more likely to have inadequate pathologic nodal analysis, resulting in incorrect understaging. As a result, these patients appear to have “more aggressive” cancers stage-for-stage though there is no underlying biologic difference. In health care systems with equal access to care, no difference in outcomes was observed. Thus, race is not associated with outcomes in colon cancer, when all patients received appropriate investigation and treatment. A similar phenomenon has been observed in prostate cancer in which Black men have worse outcomes overall in the U.S. population, but equivalent outcomes in equal access health care systems.

Examining other ways to categorize populations, Dr. Brawley stated that area of geographic origin is more specific and scientific than race though this remains very complicated, an issue he highlighted by showing that there are 840 such areas in Europe. However, these populations do differ in how they metabolize medications and the prevalence of drug targets. Thus, he suggested that studying population variation is reasonable. As examples, he emphasized differences in G6PD among people from the Mediterranean, certain areas of Africa, India, and the Middle East; the HLA-B*1502 allele which is common among patients living close to the Thai-Burmese border which affects drug metabolism and toxicity; and the sickle cell mutation which is prevalent among individuals from southern Greece, southern Italy, the Middle East, and sub-Saharan Africa. In oncology, there is evidence of differences in the efficacy and toxicity of, for example, gefitinib and irinotecan among differing populations.

Even among defined populations, Dr. Brawley emphasized the importance of environmental influences. For example, capecitabine toxicity is higher among American populations due to folate supplemental in our food chain.

Considering the evolution towards precision medicine in the 21st century, Dr. Brawley emphasized that these approaches are rarely conducive to large-scale phase III trials. As a result, drugs are increasingly approved following phase II trials. Markers and targets do differ according to population and are more informatively given by the area of geographic origin. This emphasizes the importance of studying population variation of markers, targets, and causes between populations.

Dr. Brawley used the case of triple-negative breast cancer to emphasize this point: TN-BCa is more common among Black women. However, rather than an underlying biologic cause, this is driven by differences in risk factors between Black and white women – including obesity, dietary differences, and differences in reproductive patterns. Further, hospitals that serve poorer patient populations are more likely to provide and endorse the use of formula, thus decreasing rates of breast feeding which in turn increases the risk of TN-BCa.

As the entirety of this talk would suggest, overcoming health disparities entails so much more than simply inclusion the diversity of patients included in clinical trials. Indeed, it often involves specific focused study of specific populations and assessment of populations in different social situations. As alluded to in the colon cancer examples above, addressing disparities in care often involves ensuring patients receive adequate care. The VA system has highlighted this in which differences in health outcomes observed in the US population at large disappeared in an equal access system.

In terms of accrual to clinical trials, Dr. Brawley emphasized that there is a representation by race on trials, which is worse among pharmaceutical-funded trials compared to NCI-sponsored studies though it is also lacking here. 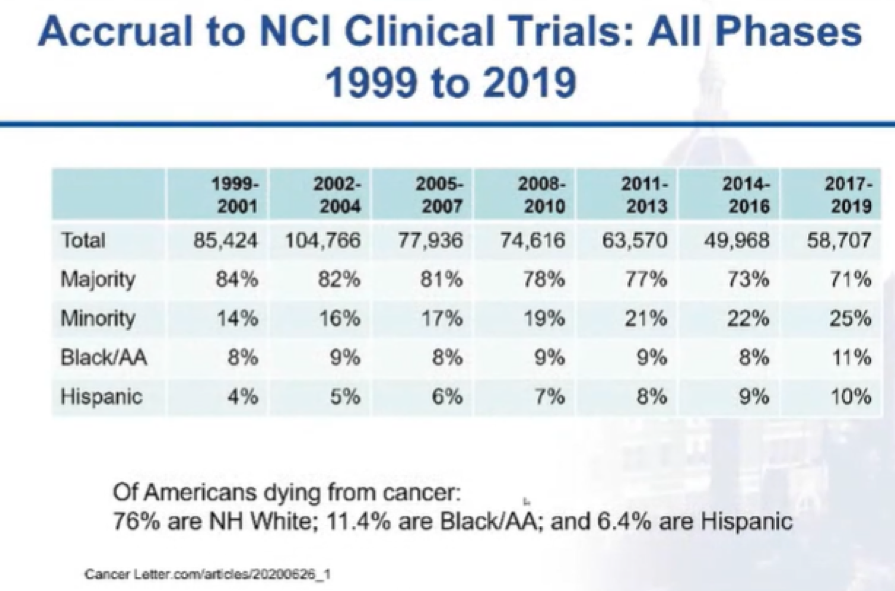 Specifically looking at pharmaceutical company-funded trials of immune checkpoint inhibitors, accrual of Black patients is incredibly low with less than 4% of patients included, despite the fact that 11.4% of Americans dying of cancer are Black. Notably, independent of race, approximately 70 to 80% of patients who are offered a clinical treatment trial will say yes. Thus, differences in representation almost certainly are driven by a substantial number of physicians who do not ask their patients about trials. In contrast to these treatment trials, socioeconomically disadvantaged individuals are more likely to refuse participation in prevention studies, owing to, in Dr. Brawley’s view, more pressing life concerns.

Dr. Brawley emphasized then the importance of clinical trial accrual, highlighting that doctors who put 3% of their patients on trial have between outcomes for the remaining 97% of patients as compared to doctors who do not participate in trials. However, Dr. Brawley acknowledged that clinical trial participation may be a large burden for some institutions which may worsen care for all patients and, thus, involvement is not universally appropriate.

As we consider trial design and accrual, Dr. Brawley emphasized the importance of appropriately defining populations, allowing us to understand the influence on these populations. However, he emphasized caution in the interpretation of subgroup analyses, which may be bolstered by the increased power offered by meta-analysis.

Considering the cost of cancer care, Dr. Brawley highlighted that 19% of the US economy is attributable to health care delivery. However, socioeconomic factors may actually trump health care resources. To that end, it is clear that college-educated Americans have a much lower risk of cancer-related death than non-college-educated contemporaries, across all racial and ethnic groups. Thus, modeling work from the American Cancer Society highlighted that, among the 600,000 Americans expected to die of cancer annually, 132,000 deaths (22%) would be avoided if all Americans had the cancer death rate of the college-educated. Thus, it may be more powerful to work on education of the population than to improve health care delivery or technology. Further, the majority of these preventable deaths occur among white Americans, highlighting that the issue of disparities in health care is not a racial minority issue alone.