To this end, the Johns Hopkins Greenberg Bladder Cancer Institute and the American Urological Association held a Translational Research Collaboration entitled “Drug Development in NMIBC from Scientific, Regulatory, Clinician, and Patient Perspectives”. The first session of this symposium focused on Drug Development for BCG-naïve NMIBC. In this session, Dr. Abbosh presented Model Systems to Facilitate Development of Therapies for NMIBC, with a focus on rodent and small animal models.

Among these, he discussed both 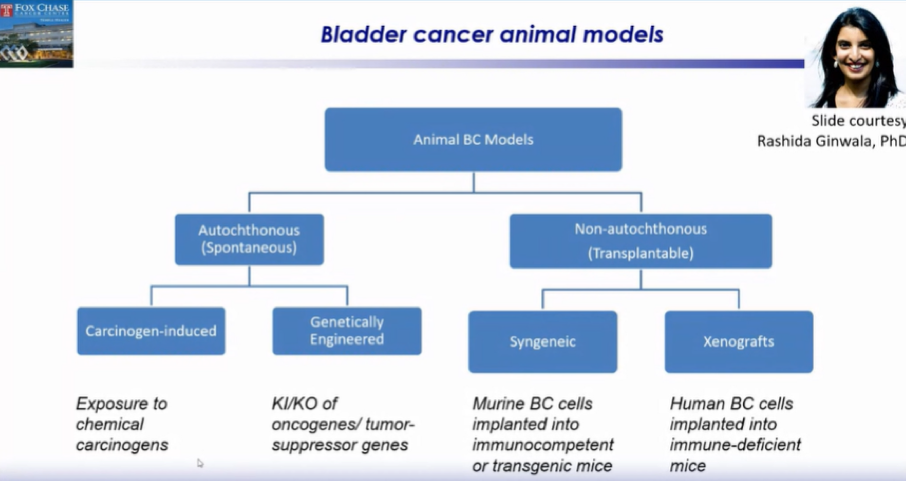 He first began with an autochthonous, carcinogen-induced model using BBN, a tobacco smoke-related metabolite that can be administered with continuous exposure through drinking water. Notably, the BBN carcinogen is specific for the induction of urothelial bladder cancer. Further, this model recapitulates many of the histologic and genetic features of human bladder cancer, apart from the APOBEC signature and copy number alterations. He highlighted data based on whole exome sequences of human bladder tumors and BBN-induced tumors, demonstrating many similarities in the mutation profile. Further, there were parallel in the trinucleotide signatures (particularly COSMIC 5 and 22) though two further unique BBN-related signatures were found.

Dr. Abbosh suggested that this model of bladder cancer may be most useful in studying secondary prevention as these models may be most similar, as a primed urothelium, to CIS or post-TURBT human tissue, suitable to studying ways to prevent a recurrence. Notably, BBN-induced tumors are sensitive to both BCG and immunotherapy, mirroring the relevant human bladder tumors. However, there is significant within tumor heterogeneity, as evidence-based on single cell RNA sequencing. This approach demonstrated that, among the subset of epithelial cells within which urothelial tumors cells are found, at least four different mRNA expression subtypes can be identified, without the consistency seen in human tumors.

Next, Dr. Abbosh discussed xenograft models based on patient-derived organoid models. He demonstrated that this approach allows the derivation of a patient-tumor “avatar” which maintains histologic and genetic fidelity to the original patient tumor. Thus, drug testing on the organoid should be transferable to clinical care.

Using what Dr. Abbosh termed “moderate throughput screening”, he demonstrated that the use of these organoids could be used for drug response testing.

Third, Dr. Abbosh discussed genetically engineered mouse models, on the basis of either knock in or knock out transgenics. He first began by describing a model with PTEN/p53 knockout on the basis of the injection of adeno-cre (a recombinase) injected into the bladder through a laparotomy. This model induced a muscle-invasive bladder cancer like phenotype. A similar approach targeted at TSC1 instead of PTEN/p53 led to the development of peritoneal mesothelioma, suggesting that the injected adeno-cre may leak into the peritoneum.

In contrast, others have used knock-out models using a uroplakin driven model. In this model, a tamoxifen-inducible cre was utilized with PTEN/p53 floxed alleles. In this model, approximately 1.5 years after exposure, the mice developed histologically papillary tumors with transcriptomes consistent with luminal RNA subtypes and PPAR-gamma and GATA3 signatures, in keeping with human bladder tumors. However, unlike BBN-induced bladder cancer models, these transgenic models have relatively little heterogeneity and poor response to immune checkpoint inhibition. It’s postulated that a lower neoantigen load may explain this observation.

Among the four models he initially described, fourth, Dr. Abbosh discussed syngeneic models. In his view, these are based on old, mouse-derived cell lines which do no express epithelial markers and are thus not really bladder cancers. Further, RNA expression profiling of these tumors shows they have neither luminal nor basal features, and are likely fibroblast contaminants.

Finally, Dr. Abbosh described work from his lab which they have terms BUTY (Bladder Urothelial Tumors with Your Genes-of-interest). This is derived from a mouse-origin urothelial cell which is grown as an organoid. These mouse cells are then infected with vectors that allow for inducible excision of the LSL stop and expression of Cas9 and EGFP to make a traceable urothelium. This tissue recombinant bladder with CRISPR-edited urothelium can then be introduced into a normal mouse which had previously undergone chemical TURBT with total removal of the urothelium. 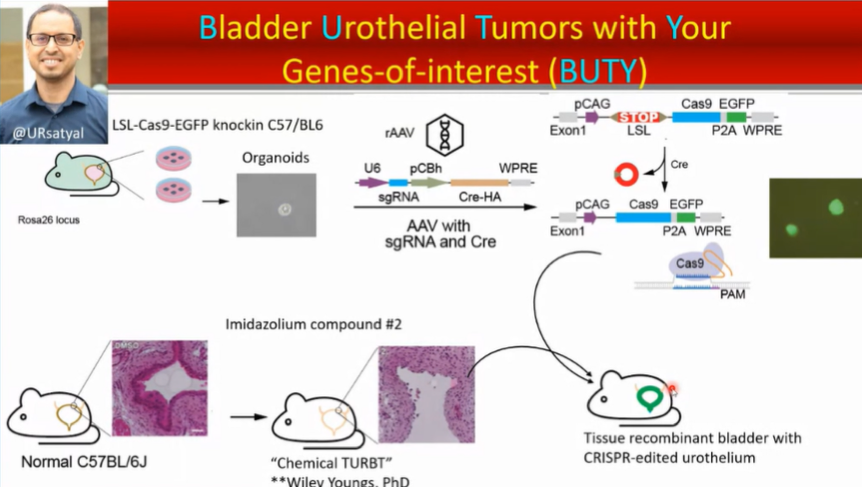 Based on this model, they were able to create a base organoid., with a knock out of p53/rb1 due to induced frameshift mutations leading to loss of function.

Using this base organoid, further additional hits can be induced. Dr. Abbosh cited an example of induced mTOR pathway mutations, which based on human data occur in 40% of urothelial bladder tumors. These organoids can then undergo screening with kinase inhibitors to assess sensitivity to specific treatments. In addition to these gene specific induced mutations, Dr. Abbosh highlighted that their model could induce large chromosomal deletions, for example 9p21del, again recapitulating human bladder cancers.

A parallel tandem duplication approach can be used on chromosome 4 to induce an FGFR3 chimera. 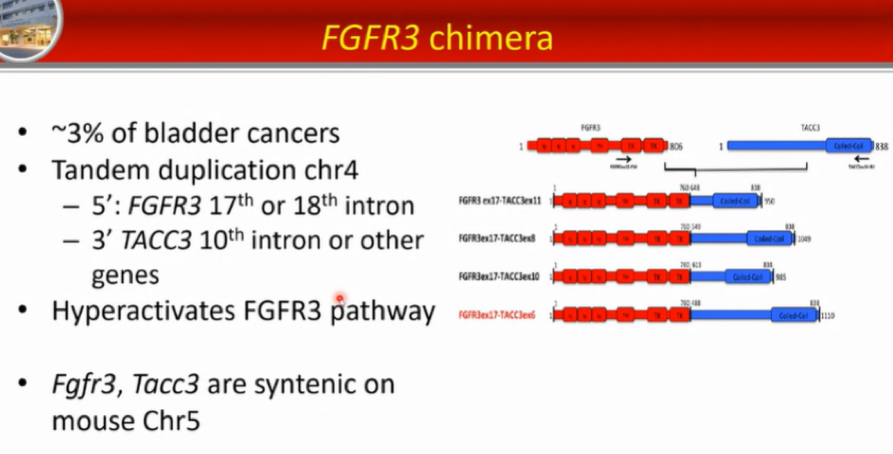 He closed by emphasizing that each of these methods has its own strengths and limitations. The BUTY model was designed to maximize the strengths of other model approaches. It further allows for targeted screens.