He noted that until very recently, care of VHL associated tumors was heavily in the sphere of surgeons. While there was a clear role for surgery and ablation for local control to minimize the risk of metastases and control local symptoms, there was little data in the context of metastatic spread, without dedicated VHL-specific studies. Management was therefore driven by standard of care for sporadic tumors.

However, he highlighted the importance of exploring alternative treatment strategies. This derives from at least two reasons. First, patients with VHL have a lifelong risk of developing new lesions. Second, current treatment approaches are associated with significant morbidity. Typically, patients with VHL require multiple surgeries during their lifetime, with risks relating to perioperative complications, gradual loss of function (renal function, pancreatic or adrenal insufficiency), and potential neurologic deficits.

After the identification of the VHL gene in 1993, there has significant progress in understanding the molecular biology of VHL associated RCC. Recently, this has culminated with the approval of belzutifan as targeted therapy. 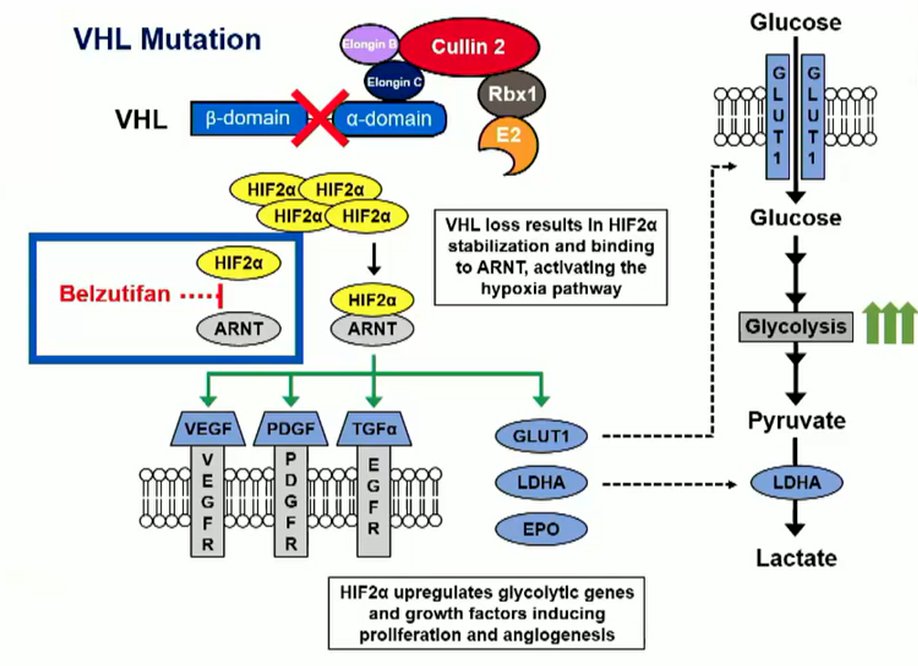 In terms of renal lesions, the objective response rate was 64% (95% CI 51-76%), with 7% of patients having a complete response. Dr. Srinivasan highlighted the case of a 45 year old woman diagnosed with VHL at age 34 who, at the time of trial enrollment, had bilateral renal tumors, pancreatic neuroendocrine tumors, and CNS hemangioblastomas. He showed evidence of significant regression of renal tumors, while treated on belzutifan. Additionally, he noted that this patient has avoided surgical intervention since starting therapy, with evidence of improvement in her pancreatic neuroendocrine tumors and CNS hemangioblastomas, mirroring the overall study cohort which had ORRs of 91% and 44%, respectively for these two tumor types.

He then moved to a second case discussion, this time of a 30 year old man who was diagnosed with VHL at age 12. Following multiple laser surgery and cryoablation of retinal hemangioblastomas and CNS surgeries, he currently had bilateral, multifocal RCC and multiple cerebellar and spine hemangioblastomas. He highlighted evidence of regression of these tumors after 24 months of therapy. Corresponding, as highlighted below, patients starting belzutifan have substantially lower VHL-related surgeries after index. 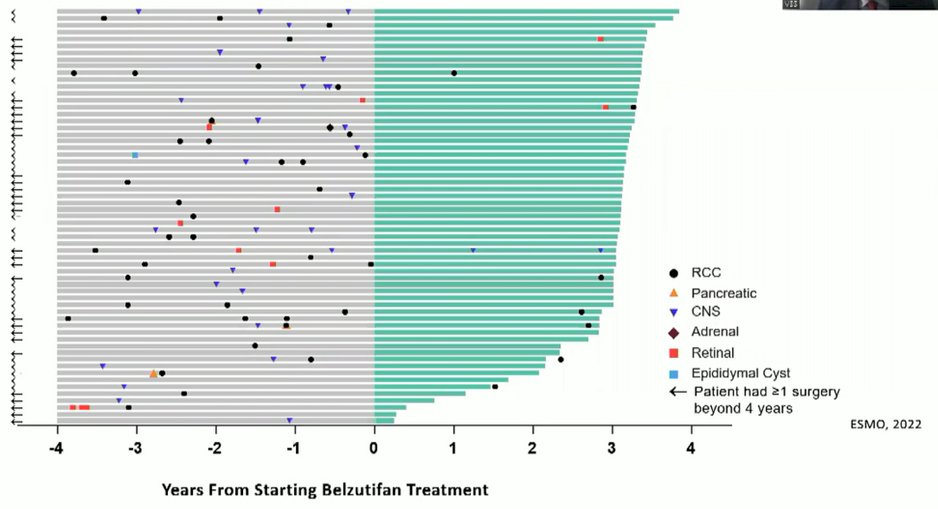 In terms of toxicity, he emphasized that, mechanistically, we should expect decreased erythropoietin levels following HIF inhibition which leads to anemia. In terms of clinical practice, belzutifan represents the first FDA approved systemic therapy for VHL-associated tumors allowing for some VHL patients to be managed medically to help avoid or delay surgery, and as a complement to, rather than supplanting, surgical intervention and surveillance. However, long-term efficacy and toxicity require ongoing study. He further noted that there are outstanding questions regarding patient selection and treatment of resistance.

Dr. Srivasan then transitioned to discussing the management of advanced HLRCC. He noted that functional alterations in fumarate hydratase, leading to HLRCC, predispose to early onset, clinically aggressive RCC. Until recently, there have been no effective treatment options. He noted that loss of FH function is associated with HIF-alpha accumulation, leading to angiogenesis. 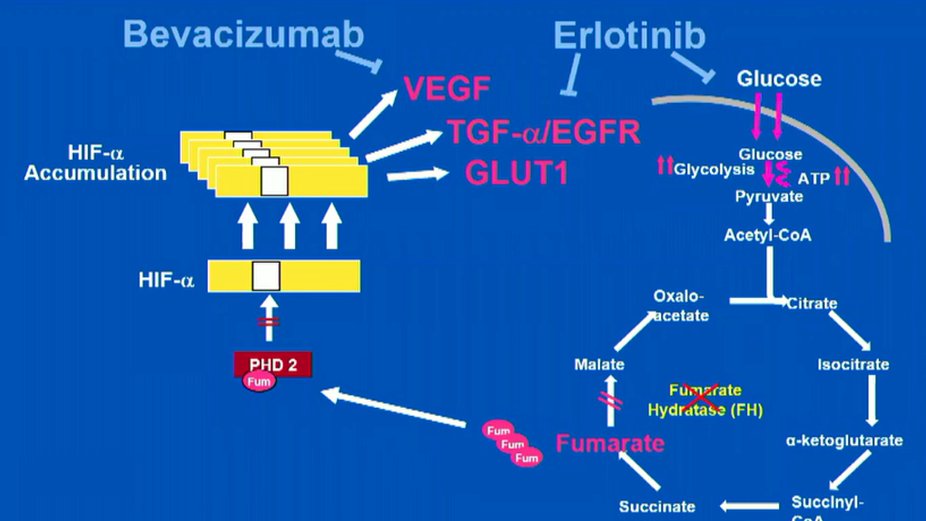 The novel treatment approach of bevacizumab and erlotinib demonstrated promising results in this patient population with an objective response rate of 72% (95% CI 57-83%), with 5% complete response rate. Further, the median progression-free survival was 21 (95% CI 16-27) months. However, alternative treatment approaches are also being explored including cabozantinib and nivolumab. In a phase II trial focused on patients with non-clear cell renal cell carcinoma, five of five patients with FH alterations had a response. He noted that systemic therapies in HLRCC have high response rates, with often durable responses but most patients will eventually succumb to their disease due to treatment failure. Thus, there are ongoing efforts focused on improving upfront therapies and developing treatment approaches for disease failure. One ongoing trial is examining bevacizumab, erlotinib, and atezolizumab. 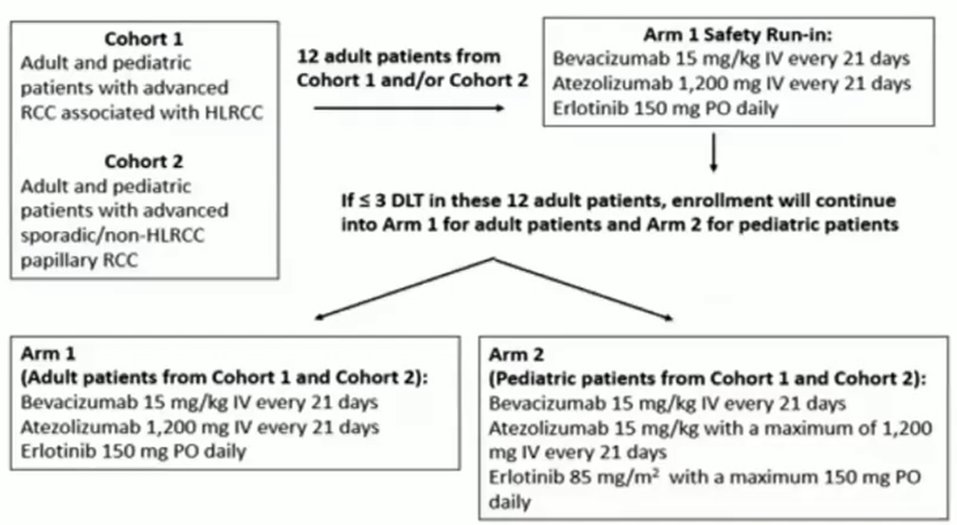 Further trials are aimed at targeting DNA repair defects including combinations of pamiparib and temozolomide and of talozoparib and avelumab.