(UroToday.com) The 2022 IKCS North American annual meeting featured an Academy of Kidney Cancer Investigators session with a presentation by Dr. Peter Ly discussing data on his laboratory investigation on the role of a specific form of DNA alteration known as chromothripsis on renal cell carcinoma (RCC) development.

Chromothripsis refers to the process by which multiple large-scale genomic rearrangements occur within a given chromosome.

While chromothripsis is prevalent across the spectrum of solid tumors, RCC exhibits a unique pattern of chromothropsis resulting in markedly disproportionate involvement of chromosomes 3 and 5. These chromosomes contain genes critical to the development of RCC, especially VHL and BAP1 on 3p – suggesting an important role for chromothripsis in RCC development. 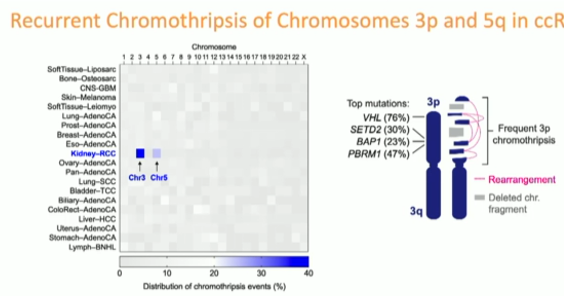 While this process could occur across the genome, the isolation to these specific chromosomes suggests the possibility that the marked chromothripsis observed on chromosomes 3 and 5 is possibly the result of a chromosome segregation error during mitosis leading to the formation of extranuclear micronuclei.

Dr. Ly has developed an experimental system to induce chromothripsis under various conditions. He hopes to leverage this system to:

In the long term, these efforts seek to reveal the key molecular pathways of chromothripsis-mediated RCC oncogenesis for the development of novel agents to therapeutically target chromothripsis in RCC.

Presented by: Peter Ly, PhD, The University of Texas Southwestern