Dr. Yousef Zakharia presented the case for doublet therapy. He began by emphasizing the importance of treatment-free survival as a critical endpoint in metastatic RCC and an endpoint by which the full clinical benefit of IO/IO therapy is most evident. 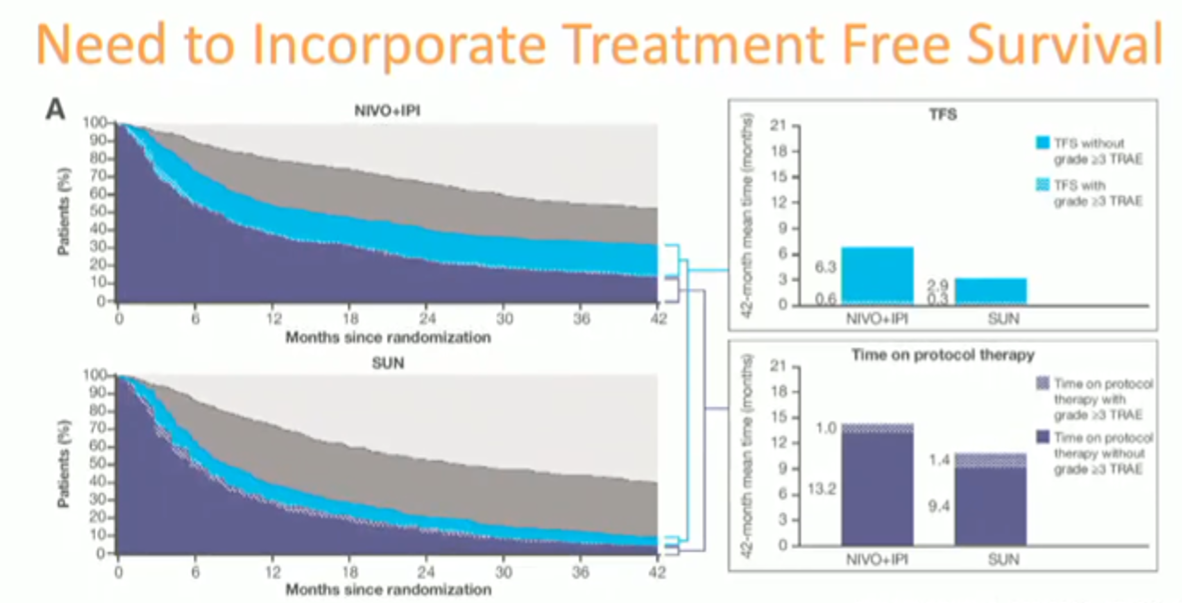 In terms of patients benefiting most from 1L IO/IO therapy, Dr. Zakharia reviewed the clinical data supporting regulatory approval for 1L ipilimumab + nivolumab in intermediate- and poor- risk patients, and emphasized the efficacy among the subset with sarcomatoid features, as with the patient in the case vignette.

He moved on to discuss the general approach of combination therapy and introduced the design of COSMIC-313, the recently presented randomized phase III trial of ipilimumab + nivolumab with or without cabozantinib.

Notably, nearly half of all trial participants on the triplet arm had to discontinue a study treatment due to a treatment-related adverse event. Specifically, nearly half of triplet patients did not receive all four doses of ipilimumab. 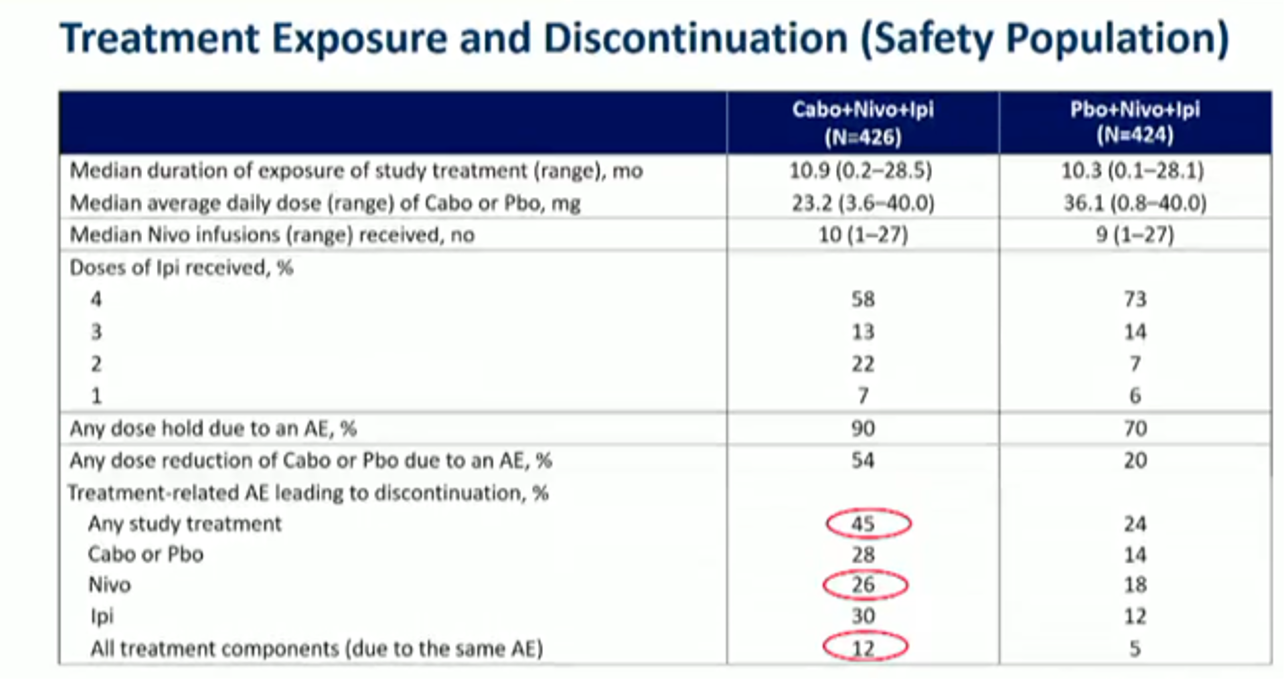 Unsurprisingly, the most common grade 3 or higher treatment-related adverse events were LFT elevations given the overlapping toxicity profiles of cabozantinib and ipilimumab + nivolumab. Given the toxicity of the triplet regimen, 58% of patients required high-dose steroids.

Dr. Zakharia highlighted that the unexpected finding that poor-risk patients – those who would generally be thought to be in greater need of a quick response – did not seem to benefit as much as the overall cohort. 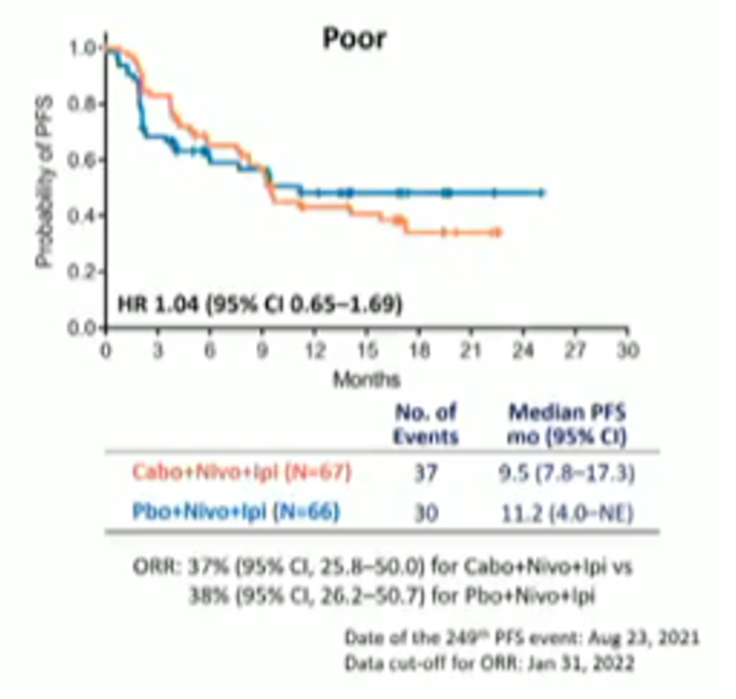 While not every poor risk patient derived benefit from triplet versus doublet, Dr. Zakharia indicated that perhaps some patients with aggressive disease may warrant the triplet combination though we do not yet have biomarkers to identify who those patients are. Nevertheless, based on clinical judgement, Dr. Zakharia indicated he would be inclined to at least consider the triplet combination among the following patient subgroups: sarcomatoid features, very heavy disease burden unable to tolerate any progression, relatively healthy otherwise and with excellent performance status.

While cross-trial comparisons are fraught with bias, qualitatively, the response rate to the triplet regimen is not markedly higher than the response rate for ipilimumab + nivolumab or for axitinib + pembrolizumab. 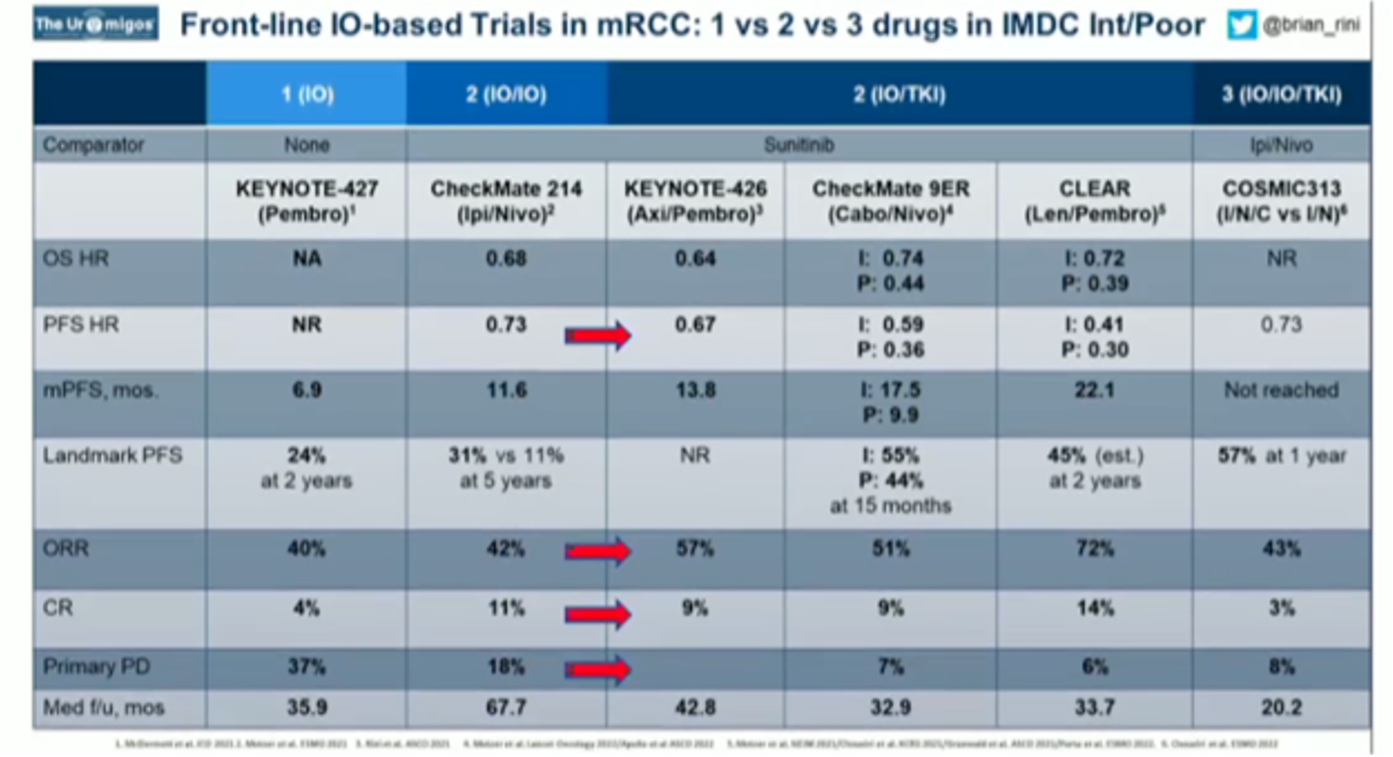 Dr. Zakharia concluded that doublet IO-based therapy remains the standard 1L regimen with the caveat that triplet therapy IO/IO/TKI has demonstrated superiority to IO/IO and should be considered for a highly-selected patient population.

Dr. McKay next presented the case in favor of the IO/IO/TKI triplet. She began by reviewing the frontline trials currently guiding clinical management. 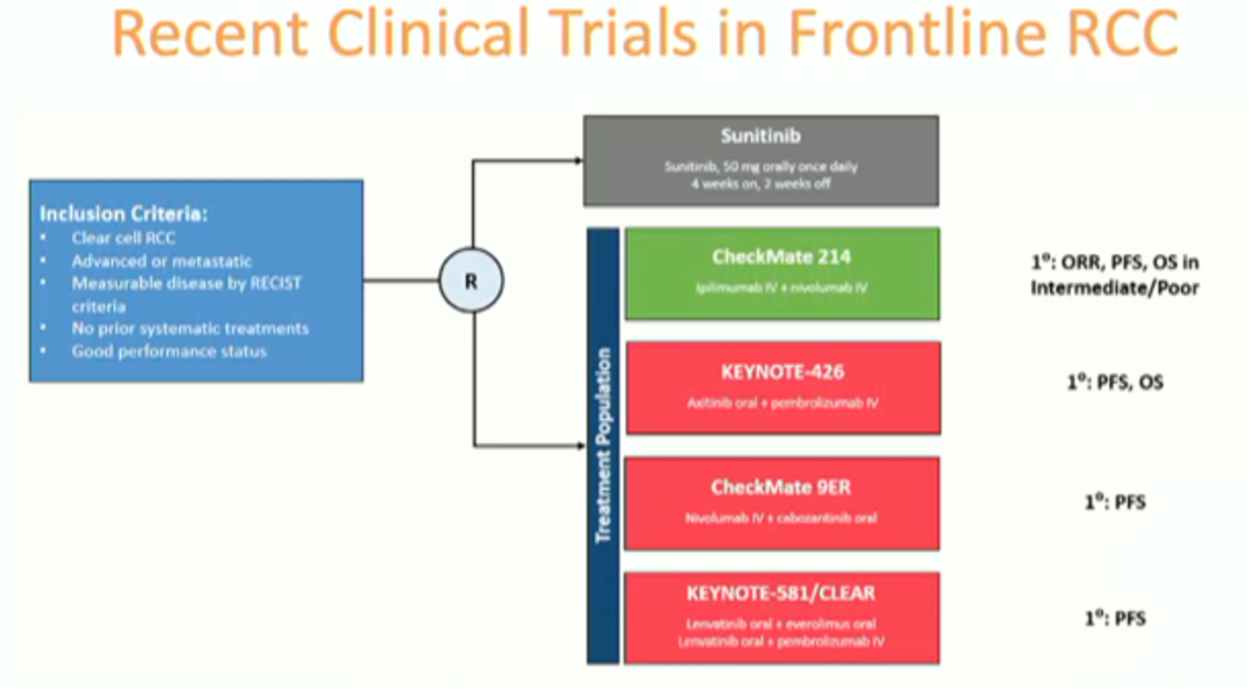 In terms of the rationale for a triplet combination, Dr. McKay indicated any triplet approach should ideally achieve the following: prolongation of PFS to IO-based therapy, decrease the rate of primary PD and increase the ORR, have a manageable toxicity profile, and improve overall survival.

Beginning with the aim of improving PFS to IO-based frontline therapy, Dr. McKay highlighted the 18% rate of primary progressive disease with ipilimumab + nivolumab, considered to be the Achilles’ heel of 1L IO/IO therapy.

Dr. McKay cautioned against cross-trial comparisons, as the patient population treated on the triplet arm of COSMIC-313 differed in significant ways, notably the absence of favorable-risk patients, the preponderance of poor-risk patients, and the relatively low proportion of patients who had received prior nephrectomy.

Notably, the triplet improved progression-free survival over the modern control regimen ipilimumab + nivolumab, with early separation of the K-M curves which is sustained through a median follow-up of 20 months.

While the triplet certainly improved progression-free survival in the ITT population, the toxicity is significant and identifying the patients most likely to benefit from this more toxic regimen will be a central focus of ongoing research. Curiously, our IMDC risk stratification failed to stratify for benefit, as the poor-risk patients fared no better with the triplet versus IO/IO doublet. Dr. McKay highlights the question around effective delivery of drugs in light of the significant toxicity and suggested that future trials might consider a prospective escalation approach whereby initial dosing is conservative with the option to increase dose depending upon tolerability.

While the triplet regimen did not improve the objective response rate over ipilimumab + nivolumab, it is notable that the CR rate among CM-214 patients with an in tact primary tumor was actually 0% and that perhaps this factor played a role in the modest 3% CR rate observed with the triplet. 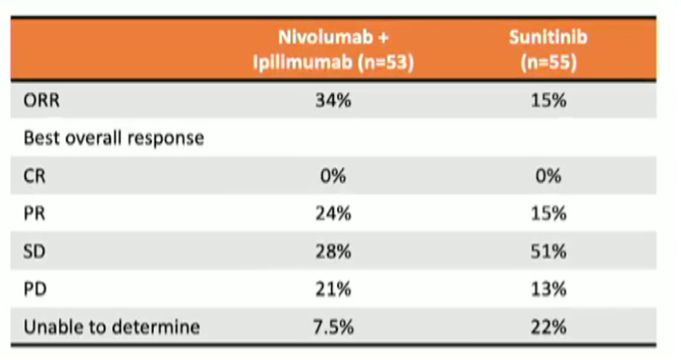 Given the clear separation of the K-M curves, Dr. McKay suggested that longer follow-up may show an OS advantage, which would certainly make the triplet regimen a compelling choice for appropriate patients.