The authors analyzed over 600 published exome-sequenced bladder tumors to identify a panel of 44 APOBEC-associated hotspot mutations, which accounted for about half of all hotspot mutations. Fourteen of them overlapped with hotspots found in other cancer types with high APOBEC activity. The prevalence of APOBEC-associated hotspots was higher than other mutations within each APOBEC-target gene, independent of their functional impact. A combined analysis of DNA loop stability and gene expression distinguished known passengers from driver hotspot mutations, including loss-of-function mutations affecting tumor suppressor genes (Figure 1). This method also predicted new candidate drivers, including AHR Q383H. 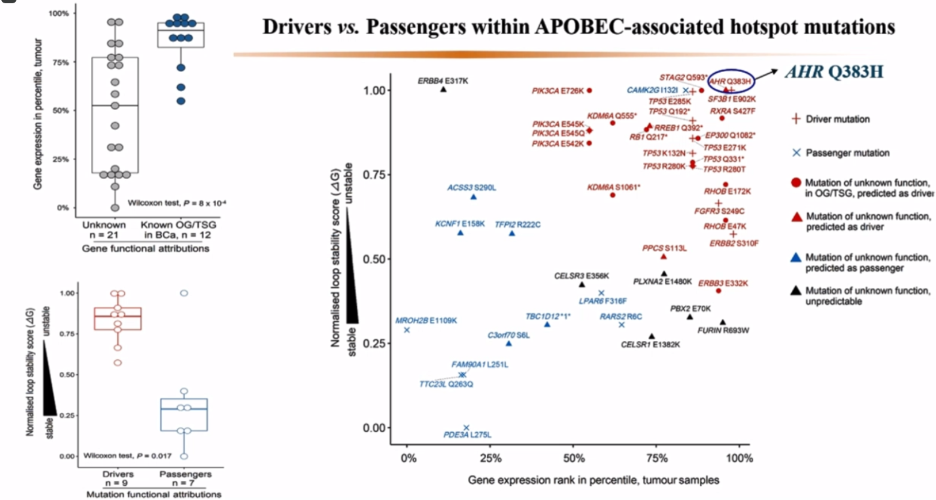 AHR Q383H was further characterized as an activating driver mutation associated with high AhR activity in luminal tumors (Figure 2). High AhR activity was also found in tumors presenting with amplifications of AHR and its co-receptor ARNT.

The study also showed that bladder cancer cells presenting with the above genetic alterations were sensitive to AhR inhibition. In addition to identifying AhR as a potential therapeutic target in bladder cancer, these results also challenge the dogma that all hotspot mutations are drivers and mostly gain-of-function affecting oncogenes.