(UroToday.com) Neoadjuvant cisplatin-based chemotherapy followed by radical cystectomy has been shown to improve survival in patients with muscle-invasive bladder cancer. However, nearly 60% of patients are inherently resistant to neoadjuvant chemotherapy at the time of cystectomy. While several mechanisms of cellular resistance to cisplatin have been proposed, these do not offer any effective patient response prediction.

Dr. Kumar and colleagues from the University of British Columbia, therefore, employed a pooled genome-wide CRISPR knock-out library targeting 19,114 protein-coding genes with 76,441 synthetic guide RNAs, which allows for an unbiased screen. This revealed several genes involved in the pro-apoptotic pathway and cell cycle regulation that have the potential to confer cisplatin resistance when knocked out (Figure 1). 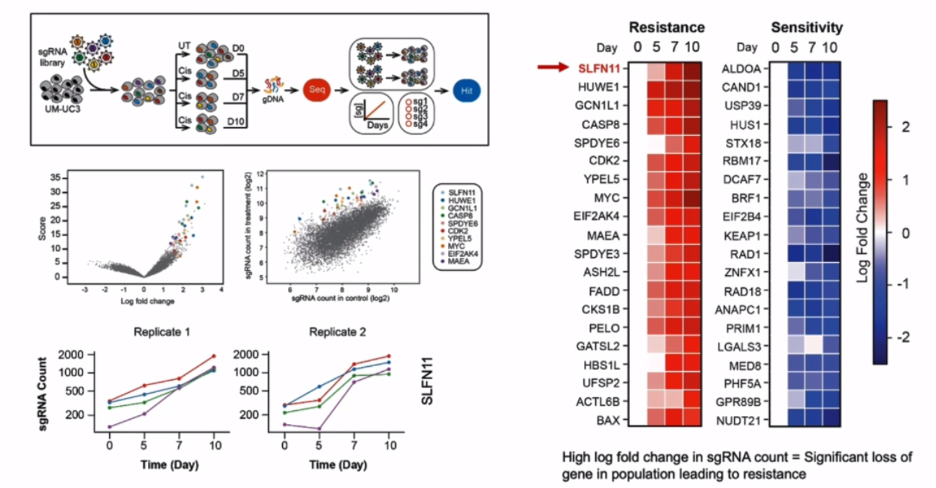 The authors then focused on the top hit, Schlafen 11 (SLFN11), and proceeded to establish that complete SLFN11 loss confers a cisplatin-resistant phenotype in muscle-invasive disease. They further noted that SLFN11 loss strongly correlates with poor response and overall outcome in patients with muscle-invasive bladder cancer (Figure 2).

Taken together, these data suggest that SLFN11 is a potential biomarker that can aid with clinical decision-making and to anticipate resistance to cisplatin-based neoadjuvant chemotherapy.