(UroToday.com) Application of immune checkpoint inhibitor (ICI) therapy has seen significant progress in the last few years. Agents targeting programmed cell death protein 1 (PD-1) and its ligand PD-L1 have shown activity in locally advanced and metastatic urothelial carcinoma in the first- and second-line setting.1,2 However, a significant proportion of patients still perform poorly after receiving these therapies as their disease progresses rapidly.

In his keynote presentation at the 2020 International Bladder Cancer Network (IBCN) Annual Meeting, Dr. Dan Theodorescu challenged the audience to seek alternative approaches to tackle this problem. He suggested that this may be addressed by either discovery of new therapies, or using novel modalities to enhance the effect of current ICI therapies. His research group has, more recently, focused on the latter approach.

While the idea of combination therapy has been successfully applied for chemotherapeutic regimens, an existing problem is that agnostic drug combinations could result in the need for far too many dual-drug clinical trials that would just not be feasible in the current environment. He, therefore, pointed out that an urgent need, therefore, is to rationally choose drugs that would be potentially optimal combinations with immune checkpoint inhibitors. The underlying goal of his group’s current investigations is to identify molecular pathways that allow cancer growth while on ICI, and identify drugs that can target such pathways to enhance ICI response (Figure 1). His group has employed functional genomics to identify such lethal combinations. 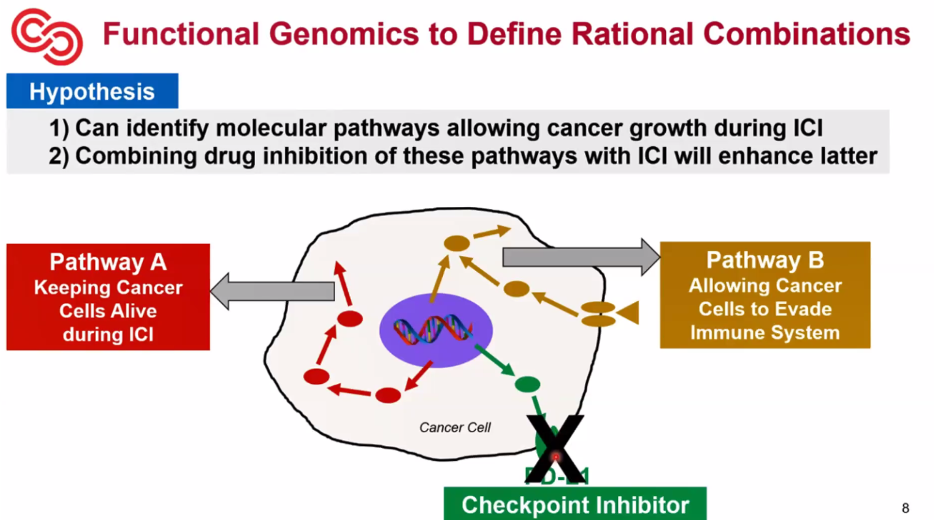 He elaborated on the technique for the construction of such functional genomic “druggable libraries”, wherein gene targets of drugs used in clinical trials for bladder cancer were identified, and five shRNAs per gene were constructed as part of a lentiviral library that were used to infect murine bladder cancer cells. The best performing shRNAs were selected as models for inhibiting the respective pathways and used to test in combination with ICI therapy. Using this approach, and in combination with anti PD-1 therapies, tumors that were resistant to the latter therapy were profiled using next-generation sequencing to identify pathways of ICI escape (Figure 2). 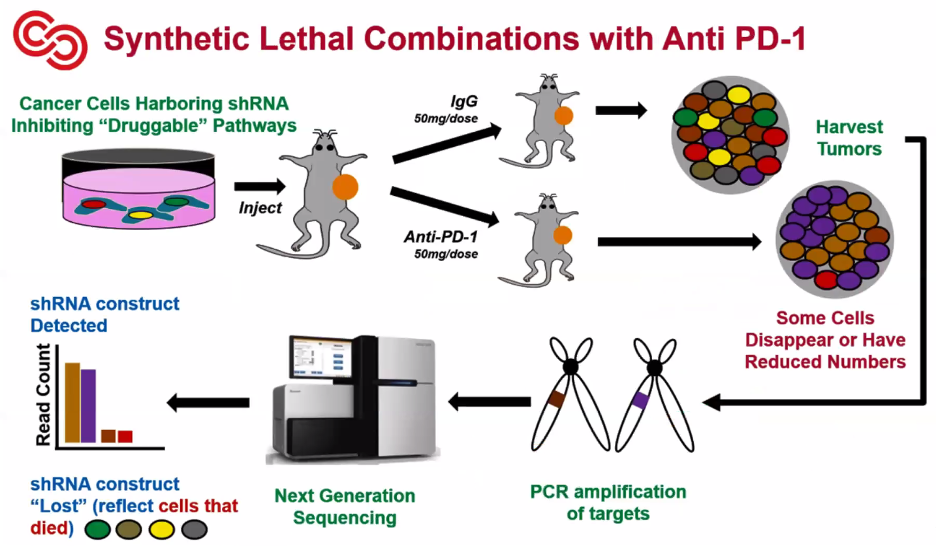 These investigations identified DDR2 and CCL2 alterations as key escape mechanisms. The DDR2 gene encodes for discoidin domain-containing receptor 2, a receptor tyrosine kinase that can be targeted by dasatinib.3 His group, therefore, proceeded to characterize DDR2 alterations in the context of ICI therapy in bladder cancer.4 Their analysis of published bladder cancer genomic profiling data indicated that patients with high DDR2 were associated with worse survival in four independent cohorts. When bladder cancer cells were transduced with DDR2 shRNAs in vitro, this resulted in appropriate reduction in protein levels (Figure 3). In the presence of anti PID-1, there was a significant reduction in subcutaneous tumor growth in syngeneic mice with bladder tumors that also stably expressed shDDR2, indicating a synergistic response. A similar response was also observed in melanoma and breast cancer in vivo models. 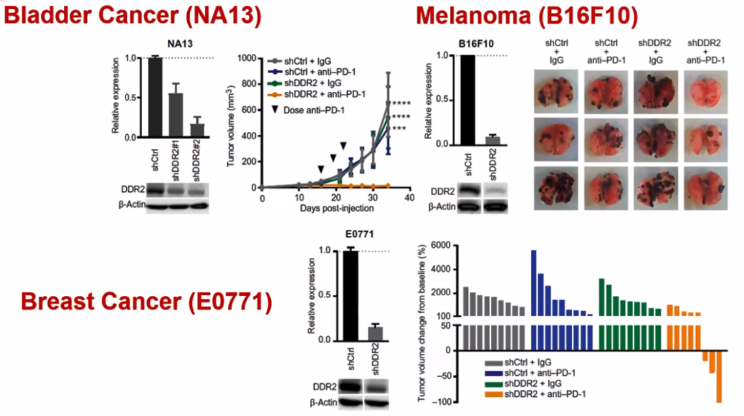 To further evaluate the efficacy of targeting DDR2, the combination of dasatinib and anti-PD-1 was tested. Whereas therapeutic blockade of PD-1 or DDR2 alone had little or no effect on murine bladder tumors, treatment with the combination of dasatinib and anti-PD-1 showed a significant reduction in tumor burden (Figure 4). Similar results were seen within vivo colon cancer and sarcoma models. 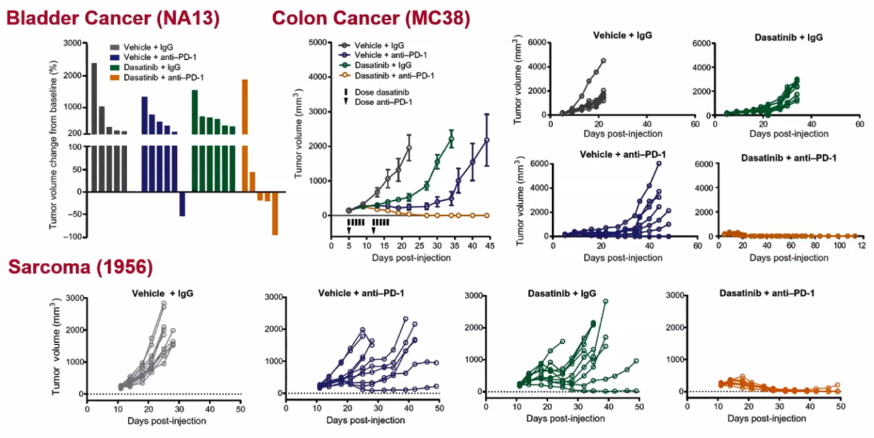 Similar studies of synthetic lethal combinations of anti-PD-1 with CCL2 inhibitors are now underway in Dr. Theodorescu’s lab. Unpublished data from his group indicates that the combination of CCL2 depletion with anti-PD-1 has a significant effect in metastatic melanoma. The data indicate there may be potential benefits in considering triple-drug combinations that target DDR2, CCL2 and PD-1.

In closing, Dr. Theodorescu highlighted recent developing results from a Phase II trial of sitravatinib, a multi-receptor tyrosine kinase inhibitor in combination with nivolumab that is indicating encouraging clinical activity in checkpoint inhibitor naïve, platinum-experienced patients with advanced or metastatic urothelial carcinoma.5 The combination with data generated from his lab and early trial results suggest that there is merit in the addition of targeted therapeutics with ICI for treatment of advanced bladder cancer.