(UroToday.com) The EUO lecture at the 2021 European Association of Urology (EAU) Section of Oncological Urology (ESOU) virtual annual meeting was given by Dr. Thomas Powles, a medical oncologist from London discussing the systemic treatment of metastatic renal cell carcinoma. There have been exciting advances in the first-line treatment of metastatic renal cell carcinoma over the last 5-10 years, summarized by Dr. Powles in his EUO lecture.

According to Dr. Powles, one of the highlights of the nivolumab plus ipilimumab combination therapy is the durable progression-free survival results in the intermediate/poor risk patients (35% at 42 months of follow-up): 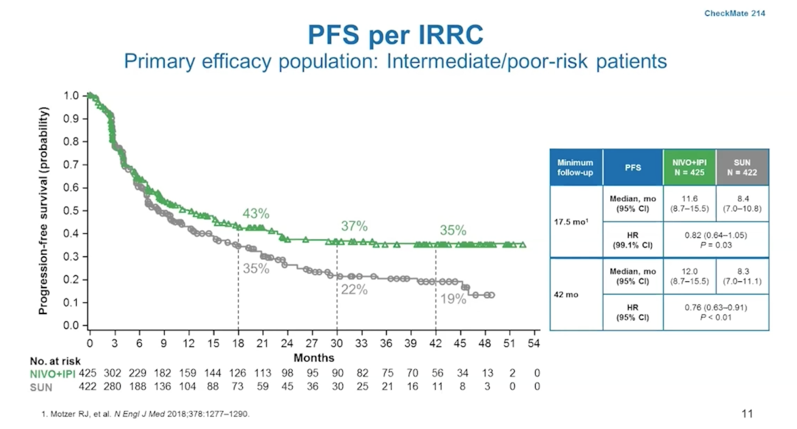 In KEYNOTE-426, 861 patients with metastatic clear cell RCC, predominately with intermediate or poor risk disease, who had not previously received systemic therapy were randomized to pembrolizumab + axitinib or sunitinib and followed for the co-primary endpoints of overall survival and progression free survival.3 While median survival was not reached, patients who received pembrolizumab + axitinib had improved overall survival (HR 0.53, 95% CI 0.38 to 0.74) and progression-free survival (HR 0.69, 95% CI 0.57 to 0.84), as well as overall response rate. These results were consistent across subgroups of demographic characteristics, IMDC risk categories, and PD-L1 expression level.

Notably, these benefits were seen consistently across pre-specified subgroups defined according to IMDC risk categories and PD-L1 expression. Of particular interest to Dr. Powles is the vast improvement in health-related quality of life for patients receiving nivolumab plus cabozantinib compared to the quality of life deterioration among patients receiving sunitinib:

Regarding the second line of therapy, Dr. Powles notes that it is essentially a dealer’s choice, however the goal is to give the patient a VEGF targeted therapy that they have not previously received.

Dr. Powles concluded with the following take-home messages from his presentation: