(UroToday.com) The second Urothelial Cancer session at this year’s European Association of Urology (EAU) Section of Oncological Urology (ESOU) virtual annual meeting featured a number of presentations, focussing on controversies in the management of urothelial cancers. The first presentation in this session was from Dr. Andrea Necchi who discussed the indications and controversies surrounding the use of neoadjuvant compared to adjuvant chemotherapy/immunotherapy in patients with high-risk upper tract urothelial carcinoma (UTUC).

Dr. Necchi began by setting the context for patients in whom perioperative systemic therapy would be relevant. On the basis of EAU guidelines (2020 update), UTUC may be risk-stratified into low and high risk on the basis of a number of features including radiographic findings, tumor size, cytology, histology, multifocality, and history of high-grade bladder cancer. 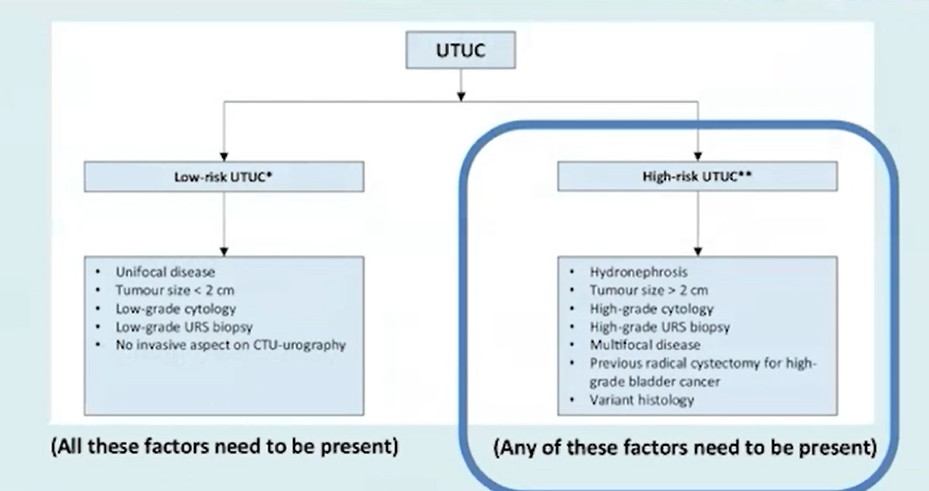 He then laid out some key assumptions regarding perioperative systemic therapy in this disease, namely, that the gold standard surgical approach is radical nephroureterectomy, that histological assessment can be circumvented though with the introduction of biases, and that conventional radiologic imaging is often inaccurate.

Further, Dr. Necchi clarified that, when considering neoadjuvant therapy, we should be excluding those with clinically node-positive disease. Instead, they should be considered for front-line therapy for metastatic disease with consideration for consolidative resection.

Highlighting a recent meta-analysis published in European Urology, Dr. Necchi emphasized that neoadjuvant therapy is associated with tumor downstaging, with pooled rates of ypT0N0 disease of 11% and pooled rates of ypT<2N0 of 43%. These data are limited on the basis of retrospective data from small studies with the incumbent biases. Further, tumor downstaging is a strong predictor of the outcome following neoadjuvant chemotherapy and radical nephroureterectomy, with strong associations with recurrence-free and cancer-specific survival.

Dr. Necchi then presented data from the ECOG-ACRIN 8141 neoadjuvant study comparing accelerated NVAC and gemcitabine/carboplatin (chosen based on renal function) in patients with high-grade upper tract disease. Among the 29 patients, 14% had no residual disease and 62% had pathologic downstaging to non-invasive disease. Notably, 23% had grade 3-4 toxicity and 20% had some degree of renal dysfunction. Arguing for a neoadjuvant approach, 59% were ineligible for cisplatin following nephroureterectomy. 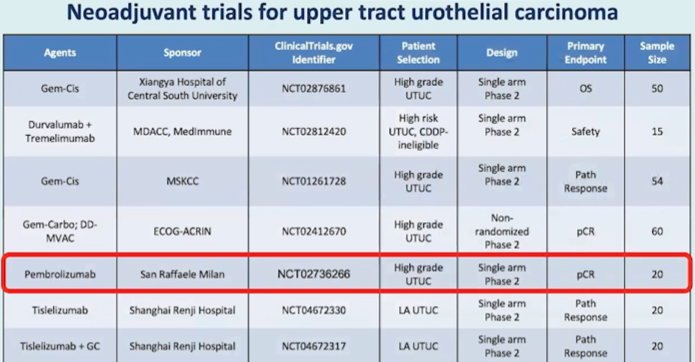 In the context of adjuvant therapy, retrospective analyses and meta-analyses of these have demonstrated survival benefits, with a pooled hazard ratio of 0.77. The phase III randomized POUT trial, assessing disease-free survival, demonstrated a benefit to this approach with a hazard ratio of 0.45 (95% confidence interval 0.30 to 0.68). Dr. Necchi further highlighted subgroup analyses on the basis of chemotherapeutic regimes and tumor stage. As with the neoadjuvant setting, there are ongoing trials in the adjuvant setting examining chemotherapeutic and targeted therapy approaches.

Dr. Necchi then highlighted the many ongoing trials of neoadjuvant and adjuvant checkpoint inhibition of patients with muscle invasive bladder cancer, emphasizing that these may reshape not just bladder cancer management but also those with upper tract disease. Early data from IMvigor-010 failed to demonstrate a survival advantage to adjuvant atezolizumab, independent of anatomic origin and PD-L1 status of the tumor. In contrast, based on press release, the CheckMate 274 trial has demonstrated a disease-free survival advantage to the use of adjuvant nivolumab in both the ITT population and in those with PD-L1 expression of 1% of greater.

Examining urothelial subtyping, Dr. Necchi emphasized that upper tract disease is enriched with the luminal subtype which is enriched with the FGFR3 mutation, thus making targeted therapy an appealing approach in this population. Indeed, two ongoing studies (PROOF-302 and PEGASUS) are doing just this in the adjuvant setting using a randomized and single-arm methodology, respectively.

Further, a subset of patients with UTUC, particularly those with Lynch syndrome, will have genomic instability and may benefit from neoadjuvant chemo or immunotherapy or may have other targetable genomic alterations and signatures.

Dr. Necchi concluded by emphasizing that multi-modality treatment should be considered the new standard of care for patients with high-risk UTUC. Currently, the available data favor adjuvant chemotherapy or neoadjuvant though there is a rationale for a neoadjuvant approach. There remain a number of important questions including the need for biopsy prior to neoadjuvant therapy, approaches to radiologic staging, the use of non-cisplatin-based chemotherapeutic regimes, and the inclusion of cT2/pT2 patients. Further, targeted therapy may, if the data pans out, prove to be preferable to immunotherapy.