(UroToday.com) As a portion of the European Society for Medical Oncology (ESMO) Annual Congress, an Educational Session focused on personalized care in genitourinary cancers was held. In this context, Dr. Christian Kollmannsberger presented the role of microRNA in testis cancer.

He began with a case example to illustrate the problem. In this case, a 40-year-old man presented with a suspicious left testis mass. Orchiectomy confirmed a 9cm classic seminoma with evidence of lymphovascular invasion. Prior to orchiectomy, serum tumor markers were normal. On staging imaging, there was evidence of a 13 x 15mm periaortic lymph node, inferior to the renal artery. PET scan was also performed prior to referral and was positive in the same location. Dr. Kollmannsberger raised the question of whether this represents metastatic disease.

This case highlights the limitations of currently employed diagnostic tools including computed tomography (CT) scan and serum tumor markers. CT scan depends on somewhat arbitrary size criteria to determine the presence of disease. Further, while it is sensitive for intra-thoracic nodules and obvious metastatic disease it is both observer-dependent and unable to distinguish the histology of lesions between inflammatory, teratoma, and malignant. Overall, the sensitivity of CT is approximately 70% in this clinical scenario and the specificity is approximately 60%.

With similar limitations, serum tumor markers may be very useful when they are expressed in terms of diagnosis, prognosis, and monitoring of treatment response. However, they may not be expressed (false negatives) and false positives may also occur. Thus, overall sensitivity is quite poor.

Thus, he concluded that currently utilized tests have only “modest fidelity”. This is important as, though the vast majority of patients with testis cancer are cured, there is long-term morbidity and mortality which is associated with increased long-term mortality.

Dr. Kollmannsberger, therefore, highlighted a variety of clinical scenarios in which a predictive biomarker may aid in the care of patients with germ cell tumors. These span the length of the disease trajectory from initial diagnosis through to follow-up and active surveillance with numerous treatment-related decisions along the way.

He then suggested that, currently, the most value in terms of predictive biomarkers would be in clinical stage I, to select patients for the receipt of adjuvant therapy and avoid overtreatment of the large number of patients who are destined not to fail. Other important disease states in which a biomarker may be particularly valuable include those with clinical stage IIA who are tumor marker negative to identify those patients to undergo curative-intent treatment and in the assessment of post-chemotherapy residual masses to select patients for surgery on the basis of predicted histology.

After setting this clinical context, he moved on to discuss microRNAs. There are short (20-23 base-pair), endogenous, single-stranded RNA molecules that regulate gene expression. miRNA 371 is expressed in more than 90% of all patients with germ cell tumors and is specific for viable germ cell tumors, but not expressed in teratoma. Further, serum levels correlate with the clinical stage and respond rapidly to successful treatment. Further, in terms of testing logistics, miR-371 is stable and relatively easy to assay with the use of PCR.

In comparison to classic tumor markers, miR-371 is more highly expressed in both seminoma and non-seminoma, compared to controls. Further, false-negative rates were relatively low (10%). As a result, the sensitivity was found to be 89% and the positive predictive value was 100%. In contrast, AFP and HCG are expressed in much fewer patients with germ cell tumors.

In a prospective multi-center study of 522 patients prior to orchiectomy or for whom 46 had relapsed germ cell tumor, miR-371 has significantly higher expression among patients with germ cell tumors. In work led by Dr. Kollmannsberger, a prospective trial comparing miR-371 to CT and conventional tumor markers demonstrated an AUC for miR-371 of 0.96, the sensitivity of 96%, specificity of 100%, the positive predictive value of 100%, and negative predictive value of 98%. This dramatically outperformed currently utilized tools including CT scan and serum tumor markers. 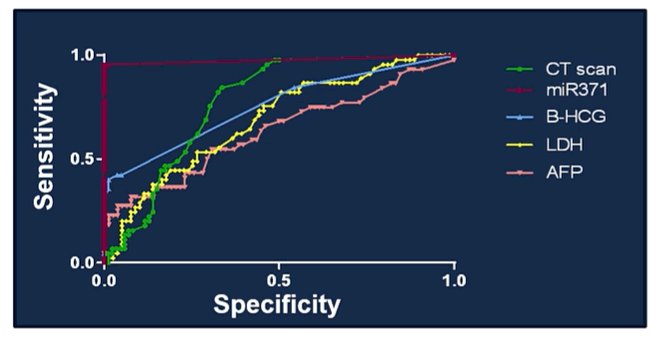 The authors then examined specific clinical scenarios, with patients divided based on the clinically assumed risk of harboring active malignancy. Those in the moderate risk presented the greater clinical dilemma. In this group, miR-371 performed similarly well to cited above and greatly outperformed currently utilized tools. With the additional follow-up to 30 months, results were similar. However, he emphasized that miR371 may not be immediately detectable following orchiectomy in those with a microscopic burden of metastatic disease. Thus, the serial measurement may be required to identify those destined to relapse. It’s unclear whether, in this situation, miR-371 is not being expressed or if the assays utilized lack the sensitivity to detect it. He suggested that it is the second of these, given evidence from biologic studies demonstrating miR-371 event among those with early evidence of disease.

In the post-chemotherapy residual mass, Dr. Kollmannsberger highlighted some work demonstrating that miR-371 expression was associated with the presence of active malignancy in residual masses.

Summarizing a number of published studies, he emphasized a consistent finding of the performance of miR-371 as a biomarker for germ cell tumors, noting a high AUC.

He further suggested that miR-371 has all the characteristics of an ideal biomarker with high specificity, high sensitivity, is readily available, non-invasive, provides consistent results, and is cost-effective. To test the clinical utility of this approach, further work is ongoing, including in SWOG S18233.

In conclusion, Dr. Kollmannsberger highlighted that miR-371 has clinical validity through current laboratory methodologies may need to be optimized to maximize clinical utility. Further, ongoing efforts are needed to validate the clinical utility of this approach.