He began by highlighting that, since the publication of LATITUDE in 2017, we have considered a “match” between the use of hormonal therapy (initially with abiraterone acetate, and subsequently with enzalutamide or apalutamide as well) or docetaxel. Both of these agents have demonstrated improved overall survival compared to androgen deprivation therapy (ADT) alone.

Supporting the use of hormonal agents, Dr. Fizazi first emphasized that, based on posthoc analyses of STAMPEDE, abiraterone has much better progression-free survival data (HR 0.56, 95% CI 0.42 to 0.75), compared to docetaxel as intensification with ADT. While overall survival is the outcome with primacy, he emphasized that progression-free survival may have important patient outcomes and effects.

Further, comparing data from LATITUDE, CHAARTED, and STAMPEDE, Dr. Fizazi highlighted patient reports of both pain and fatigue were substantially better, particularly in the early treatment period, for patients who received abiraterone compared to docetaxel. These data include both indirect (on the left) and direct (on the right) comparisons.

He emphasized that these outcomes are very important for patients, though potentially under-recognized by prescribing physicians. Further, beyond pain and fatigue, global measure of patient-reported quality of life support better outcomes for patients who receive abiraterone than those who receive docetaxel. While the analysis of STAMPEDE showed that these differences were predominately in the early treatment period, an indirect comparison based on LATITUDE and CHAARTED suggested that these differences may persist.

Forth, he considered patient-facing toxicity. While toxicity with next-generation androgen receptor targeting agents is not uncommon, he emphasized that chemotherapy-related effects may be more likely to symptomatically manifest for patients while those for the next-generation androgen receptor targeting agents are often biochemical changes or asymptomatic hypertension which may trigger medical management but don’t symptomatically present.

Fifth, while data have generally suggested improved overall survival for each agent, Dr. Fizazi emphasized that, in terms of the magnitude of effect, the hazard ratio of treatment effect has been largest in published studies examining next-generation androgen receptor targeting agents and attenuated in those examining docetaxel, relatively speaking. He emphasized that this is solely an indirect comparison, using ADT alone as the control for each trial, given that there has been no direct randomized comparison 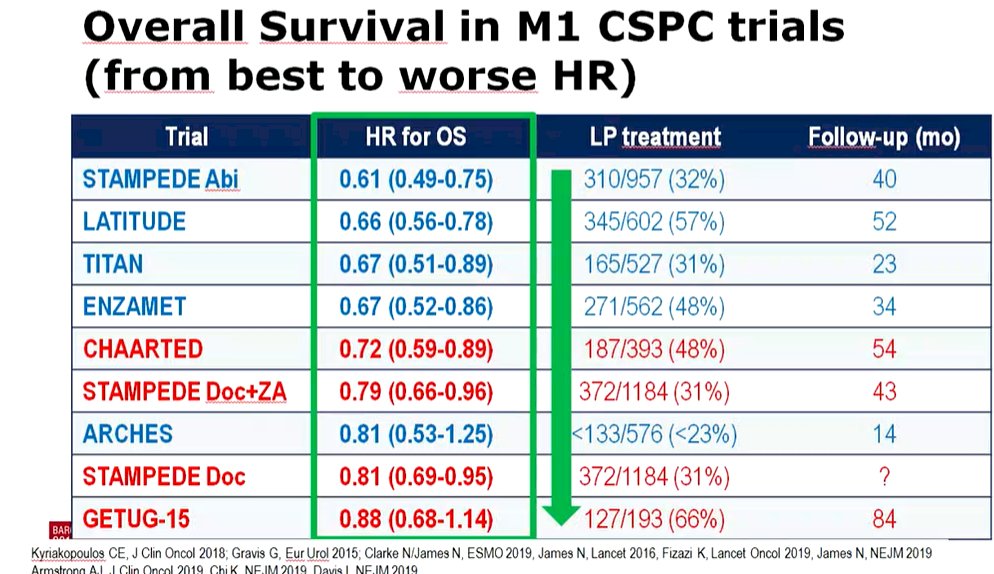 A meta-analysis with indirect comparison further has supported this conclusion demonstrating a hazard ratio of 0.80 (95% CI 0.66-0.96) for treatment with abiraterone in addition to ADT as compared to docetaxel in addition to ADT.

Summarizing, he suggested that next-generation androgen receptor targeting agents have superior progression-free survival, quality of life outcomes, toxicity, and potentially overall survival. Docetaxel has, in contrast, lower direct costs. However, he emphasized that abiraterone is increasingly generic across the world and this may be associated with decreased cost.

However, citing data from PEACE-1, he suggested that instead, the preferred approach should be a combination of the two agents. As presented at this year’s ESMO meeting, the combination approach was associated with improvements in both radiographic progression-free survival and overall survival, compared to ADT with docetaxel in those with high-volume mCSPC.

In conclusion, while choosing between one agent to add to ADT, he emphasized that we should choose a next-generation androgen receptor targeting agent. However, for those with high-volume disease, he suggested that a triplet approach should be preferred.