(UroToday.com) Following presentations from Dr. Fizazi discussing the role of abiraterone in combination with docetaxel for men with metastatic castration sensitive prostate cancer (mCSPC) and Dr. Attard discussing its role in combination with ADT for men being treated for high-risk, non-metastatic prostate cancer, Dr. Eleni Efstathiou provided an invited discussion to contextualize these results in the Proffered Paper session of the European Society for Medical Oncology (ESMO) Annual Congress focusing on prostate cancer genitourinary tumors.

She began by highlighting the 15 years of development of androgen signaling inhibition therapy, with a novel focus on enhanced targeting of the androgen axis. 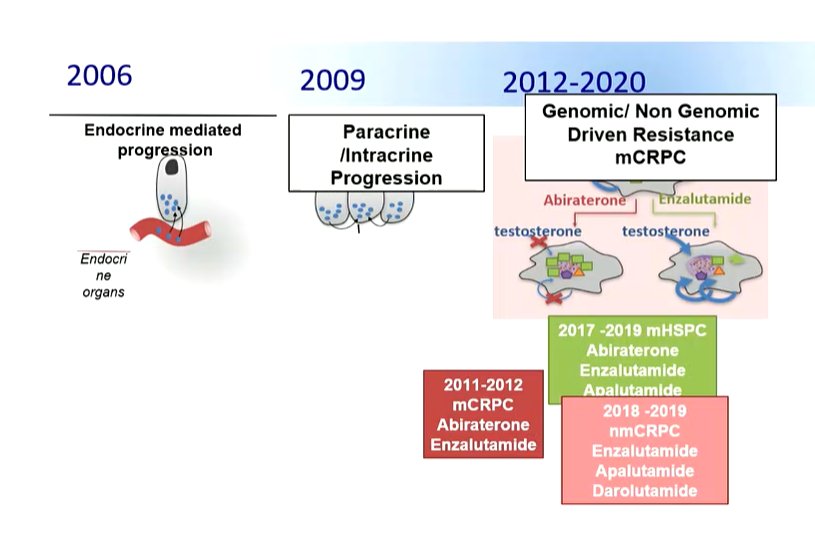 In terms of an overall progress summary, Dr. Efsthatiou highlighted that androgen signaling inhibition has become the predominant treatment approach in advanced prostate cancer, providing reproducible outcomes (including 14 phase III studies without a negative trial) and with ongoing emergence of data showing that earlier use leads to better outcomes. However, there remain many unmet needs including strategies for high-risk localized disease, predictors of outcome to guide therapy selection, and the value of combinatorial strategies. Two of these three issues were addressed in the sessions at this year’s ESMO.

Dr. Efstathiou began by discussing the recent data from STAMPEDE, highlighting the immensely important data that has come from this trial. She further emphasized that this trial is both very pragmatic and incredibly transparent. Unlike many reports from STAMPEDE, the present analysis uses two contemporaneous treatment arms.

She further emphasized that the question addressed by Dr. Attard’s talk, that of treating high risk locally advanced disease has been a stagnant area of practice for more than 20 years since the Bolla trial demonstrated the benefit of the combination of radiotherapy and androgen deprivation. Since that time, there is evidence from the RTOG-0521 trial of a marginal benefit for the use of docetaxel. Highlighting the primary outcomes from this report of the STAMPEDE trial, she emphasized that the benefit of abiraterone in this patient population was strongly statistically significant and provided large, clinically meaningful absolute differences in outcomes.

With median follow-up of 6 years in non-metastatic disease, there was a relatively early benefit in overall survival. However, also of note, was that the further addition of enzalutamide to abiraterone conferred no additional survival benefit but did compromise safety. She further emphasized the importance of ongoing assessment of toxicity and long-term morbidity. She further emphasized that this present analysis has limitations including a lack of quality of life data, no long-term adverse event reporting, a lack of surgically treated patients, and an inability to understand whether this can be extrapolated to men treated with enzalutamide, apalutamide, or darolutamide. Additionally, moving forward, she emphasized the importance of correlative studies developing a molecular signature to guide treatment selection.

In spite of these limitations, she emphasized that this trial addresses an important unmet need and utilized a comparator that remains relevant to contemporary practice. Further, the positive outcomes were clinically meaningful and relatively easily operationalized in the community.

Moving on, Dr. Efstathiou then discussed Dr. Fizazi’s presentation of the abiraterone comparison of the PEACE-1 trial. She noted that this trial adapted to a changing standard of care over time, with the addition of docetaxel to the standard of care as data and practice patterns supported this.

She emphasized that synthesis of previous publications has shown that earlier use of androgen signaling inhibitors is associated with larger benefits in overall survival. 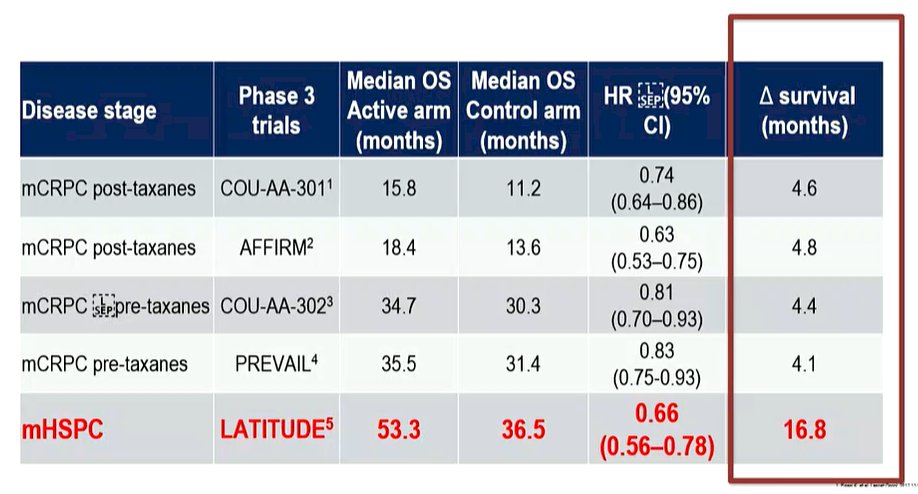 She then discussed the final OS analysis of the ARCHES trial, presented September 18, 2021, at ESMO, which demonstrated overall survival benefits for the use of enzalutamide in mCSPC. However, subset analysis of ARCHES showed a diminished benefit among patients who had received docetaxel prior to randomization. In contrast, ENZAMET assessed the concurrent use of docetaxel and enzalutamide as a prespecified subset of interest. While data are immature for overall survival, the early single suggests a diminished benefit to the introduction of enzalutamide among men receiving docetaxel.

In PEACE-1, regardless of the standard of care used (ADT alone or ADT + docetaxel), the addition of abiraterone has clinically meaningful improvements in overall survival, as well as progression-free survival. As may be expected, patients who received ADT + docetaxel as standard of care were more likely to have high volume disease. These data further emphasize that the time of use is important as most patients (80%) received advanced androgen signaling inhibitors following progression.

In terms of overall survival, data remains immature for patients with low-volume disease.

Dr. Efstathiou emphasized that cross-trial comparisons (indirect comparisons) are difficult based on evolving treatment patterns and novel treatment approaches following progression. For example, while CHAARTED, GETUG-15, and the first report of STAMPEDE showed an overall survival of approximately 33-35 months for patients receiving ADT alone, this duration was 51 months in TITAN. She emphasized then that the greater question is whether docetaxel should be added to abiraterone, rather than the converse which is what was studied. 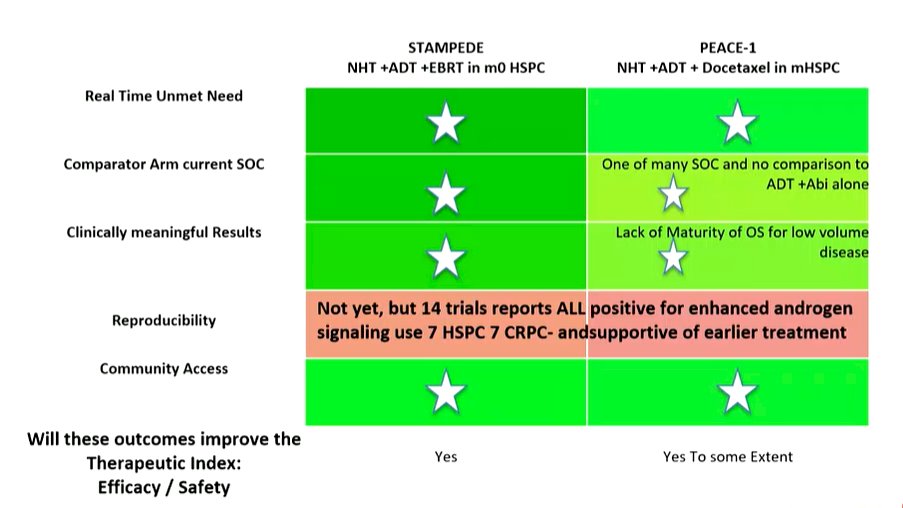 In conclusion, she stressed that earlier combinatorial treatment is a requirement for men with advanced hormone sensitive prostate cancer.

ESMO 2021: Abiraterone Acetate plus Prednisolone with or Without Enzalutamide Added to Androgen Deprivation Therapy Compared to ADT Alone for Men with High-Risk Non-Metastatic Prostate Cancer
ESMO 2021: A Phase 3 Trial with a 2x2 Factorial Design in Men with De Novo Metastatic Castration-Sensitive Prostate Cancer: Overall Survival with Abiraterone Acetate plus Prednisone in PEACE-1