Since 2015, the combination of androgen deprivation therapy (ADT) with either docetaxel, androgen signaling inhibitors (ASI), or radiotherapy to the primary tumor (for patients with low metastatic burden) was shown to improve overall survival (OS). These data have therefore shaped the standard of care (SOC) in men with mCSPC. However, whether outcomes can be further improved by combining those treatments on top of ADT is unknown.

PEACE-1 is a phase 3 trial with a 2x2 factorial design of abiraterone acetate plus prednisone (abiraterone) and/or local radiotherapy. Presented at the 2021 ASCO meeting, first results from PEACE-1 showed that adding abiraterone to ADT +docetaxel significantly improves rPFS in men with mCSPC (HR: 0.50 (0.40-0.62), p<0.0001).

To summarize, PEACE-1 accrued 1173 men with de novo mCSPC. Patients were then randomized in a 1:1:1:1 fashion to SOC, SOC+abiraterone, SOC+RXT or SOC+abiraterone+RXT. SOC of ADT+docetaxel was optional as of 2015 and became mandatory in 2017, resulting in its use for 710 pts.

The overall type I error testing the abiraterone effect was 5% (with 4.9% allocated for OS and 0.1% allocated for rPFS. In the ADT+docetaxel population, 249 events were required to detect an HR of 0.70 for OS with 80% power.

Patient characteristics, as expected, were well balanced. Notably, among those who received docetaxel as standard of care, 63% of patients had high-volume disease and 37% had low-volume disease. The median baseline PSA was 12.0-13.7 ng/mL.

Over a median follow-up of 4.4 years, 273 death events were observed in the ADT+docetaxel population. The effect of abiraterone on OS did not interact with the one of RXT (p=0.82) allowing to pool the abiraterone arms together for comparison.

In terms of the co-primary endpoint of rPFS in the population who received docetaxel as standard of care demonstrated a significant benefit to the addition of abiraterone (HR 0.50, 95% CI .40-0.62).

Thus, this demonstrates a benefit to this triplet approach, compared to the current standard of care doublet approached. In this group, the effect of abiraterone was consistent across subgroups. 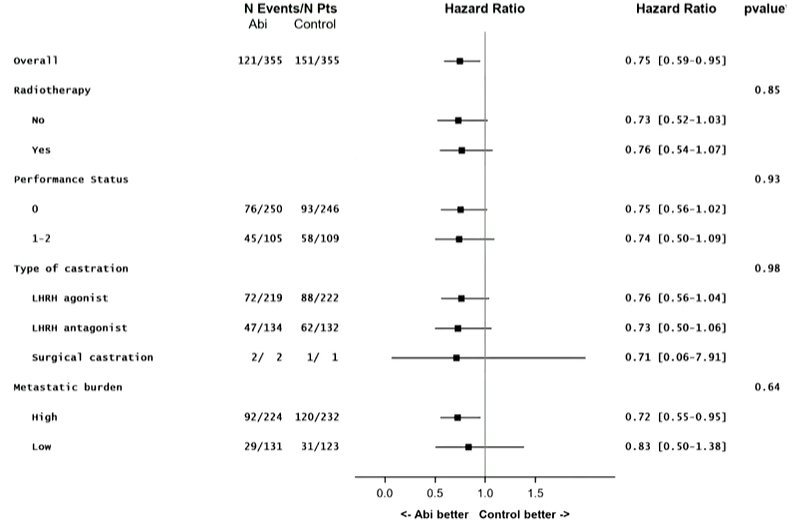 Dr. Fizazi then presented subgroups according to volume of disease in men who received docetaxel as standard of care. In those with high-disease volume, the benefit of abiraterone was a median difference of 1.6 years (HR 0.72, 95% CI 0.55-0.95. In contrast, in the low-volume group, while there was a benefit, it was no longer statistically significant (HR 0.83, 95% CI 0.50-1.38) though these data remain immature.

In terms of treatment beyond progression, 84% of men in the control arm received life-prolonging therapy with the majority receiving a next generation hormonal agent. These rates were even slightly higher among patients who received ADT+docetaxel as SOC who developed CRPC with 231/263 (88%) receiving at least one life-prolonging therapy and 222/263 (84%) at least one ASI.

In terms of toxicity, febrile neutropenia was similar between the two arms. Hypertension and transaminase increases were more common among those receiving abirterone. Grade 3-5 adverse events reported in >5% of pts in the ADT+docetaxel population included neutropenic fever (5% vs 5%), neutropenia (10% vs 9%), liver toxicity (6% vs 1%) and hypertension (21% vs 13%) in the abiraterone and control arms, respectively. Notably, there were 7 deaths due to toxicity in the abiraterone arm and 3 in the control arm.

Contextualizing these results among other trials, Dr. Fizazi highlighted that the addition of docetaxel and abiraterone, independently, were associated with median 8 and 16 month survival benefit compared to ADT alone, respectively, in men with high-volume mCSPC. The combination of these two as presented here, represents a nearly 27 month increase in OS compared to the standard of care of ADT alone which was utilized only a decade ago.

Dr. Fizazi concluded that the addition of abiraterone to ADT plus docetaxel improves both rPFS and OS in men with mCSPC, even when androgen targeting is commonly utilized as a salvage strategy at progression. He suggested that these data should be practice changing.


Presented by: Karim Fizazi, MD, PhD, Head of the Department of Cancer Medicine at the Institut Gustave Roussy, Villejuif, France and Professor of Oncology at the University of Paris