(UroToday.com) In this presentation, Dr. Karim Fizazi discussed updated results of PEACE-1, a randomized Phase 3 trial in men with de novo metastatic castration-sensitive prostate cancer (mCSPC). This update focused on the overall survival (OS) for men treated with or without abiraterone plus prednisone (AAP). 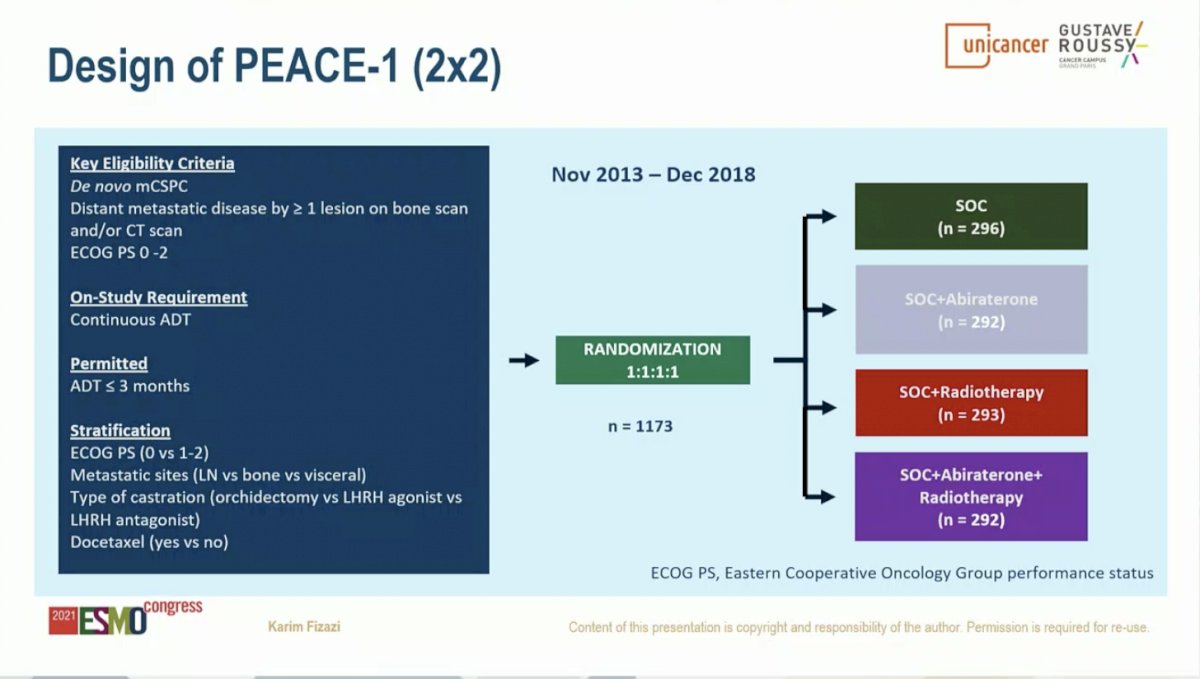 The control arm in this study evolved to reflect the contemporary SOC. When the study began enrolling patients, the SOC for first-line mCSPC was ADT alone. With publication of data from the STAMEDE, LATITUDE, and CHAARTED studies, SOC was updated to include ADT plus Docetaxel 75 mg/m2 every 3 weeks for 6 cycles. The two experimental treatments investigated in this study were: 1) AAP until disease progression or intolerance (concomitant to docetaxel) and 2) RT of the prostate (74 Gy in 37 fractions after completion of docetaxel). Results from the AAP experimental arm are discussed herein. 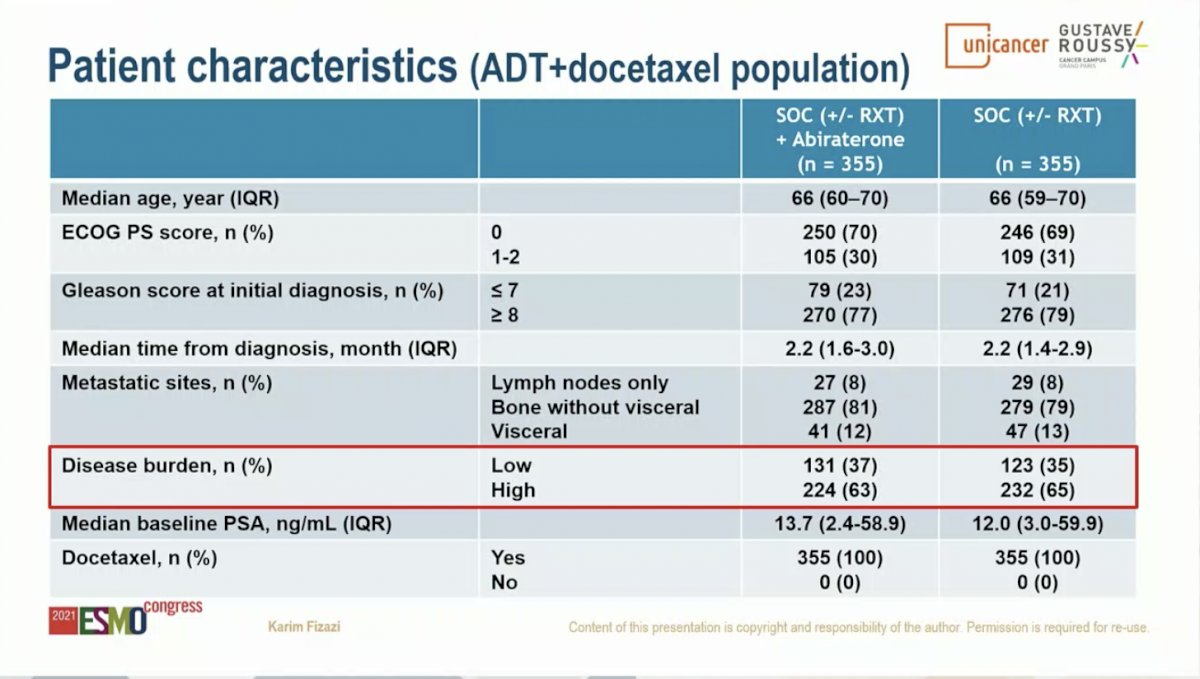 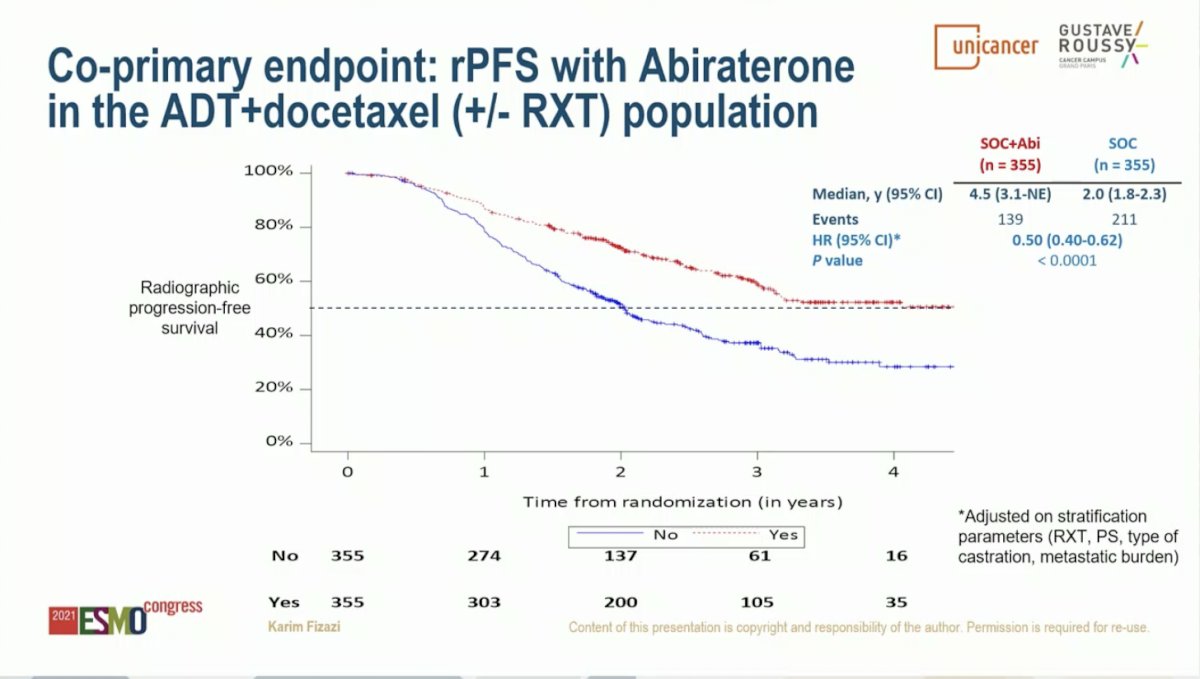 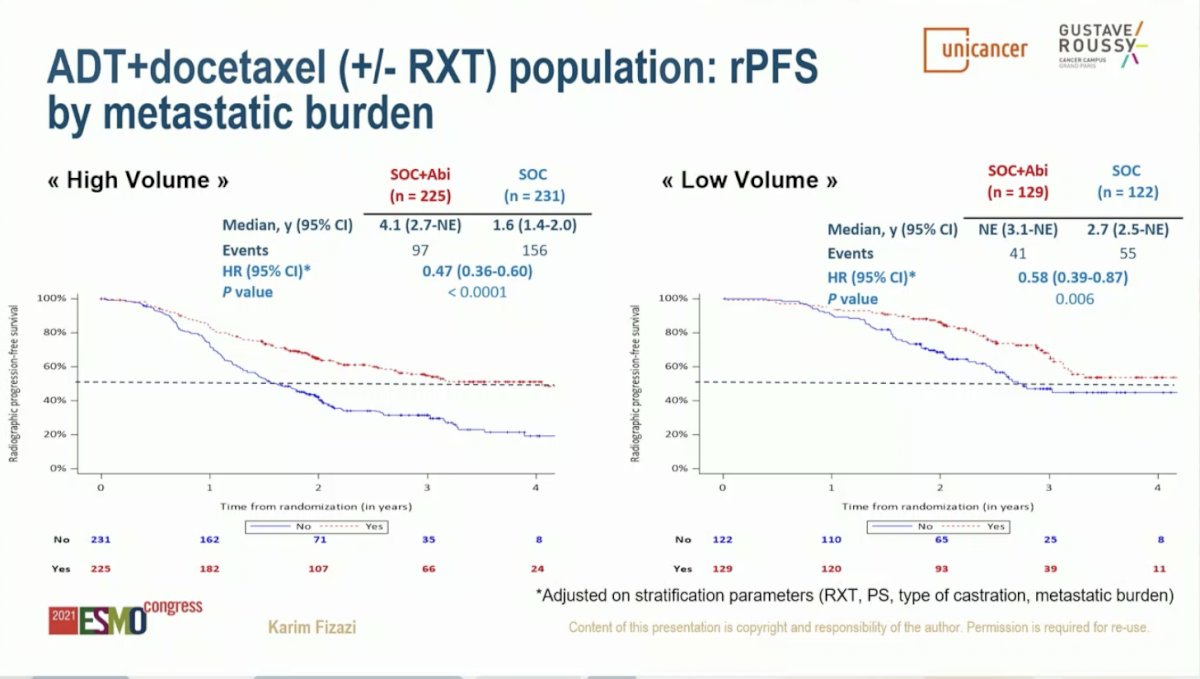 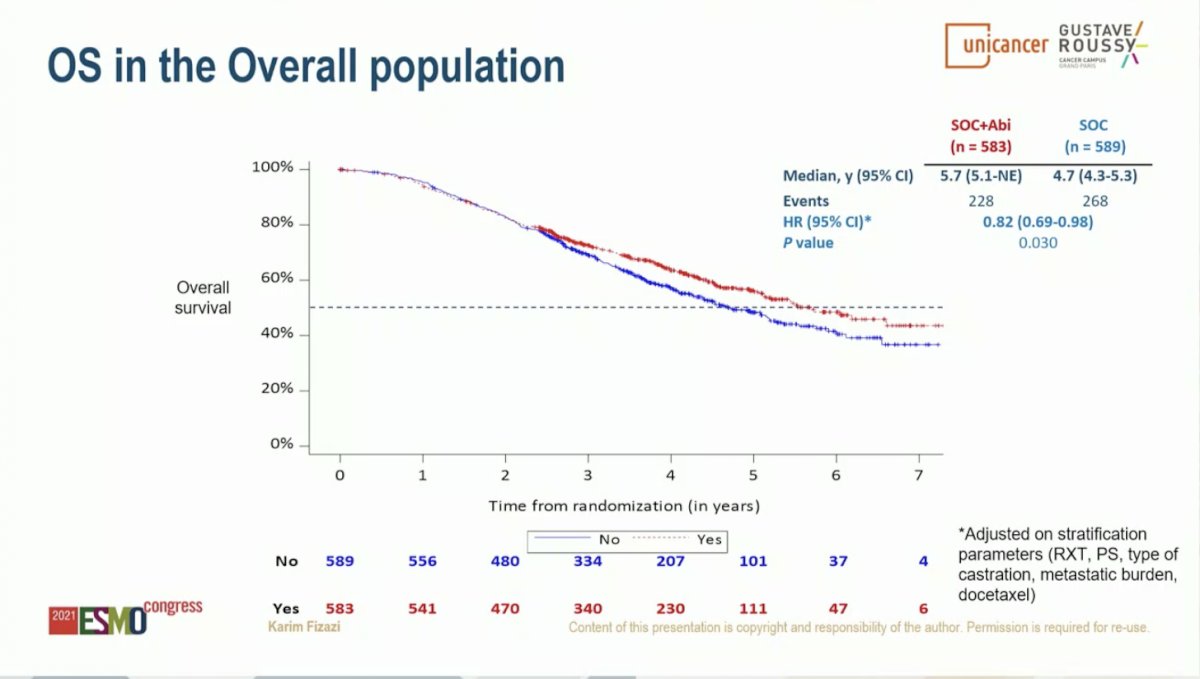 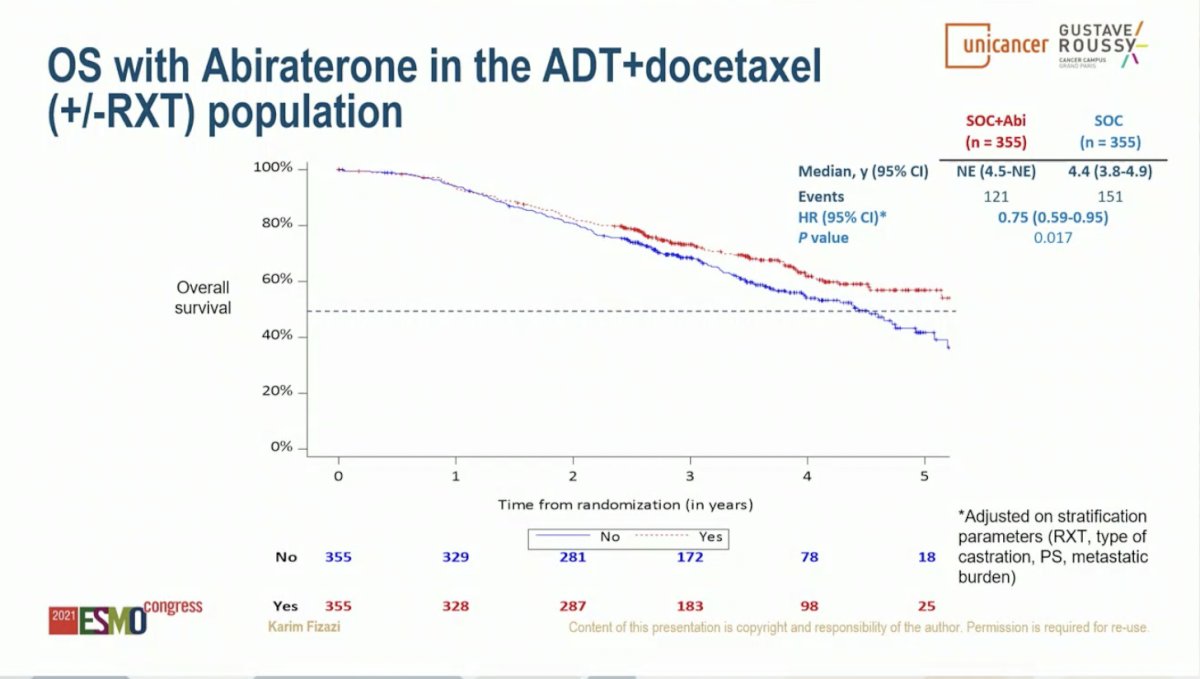 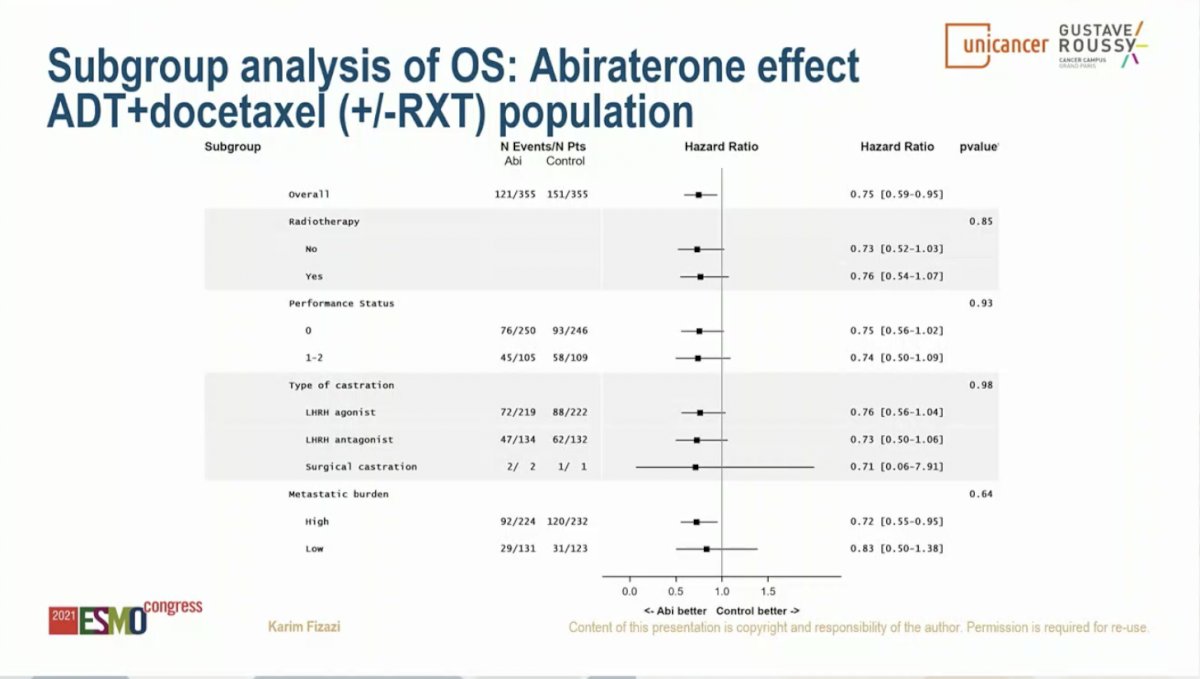 An important consideration is what therapies patients received following progression on study treatment. Notably, 81% of patients on the ADT plus Docetaxel SOC arm subsequently received a next generation hormonal therapy. This suggests that early intensification with the addition of AAP to SOC results in improvement in rPFS and OS compared to sequential therapy. 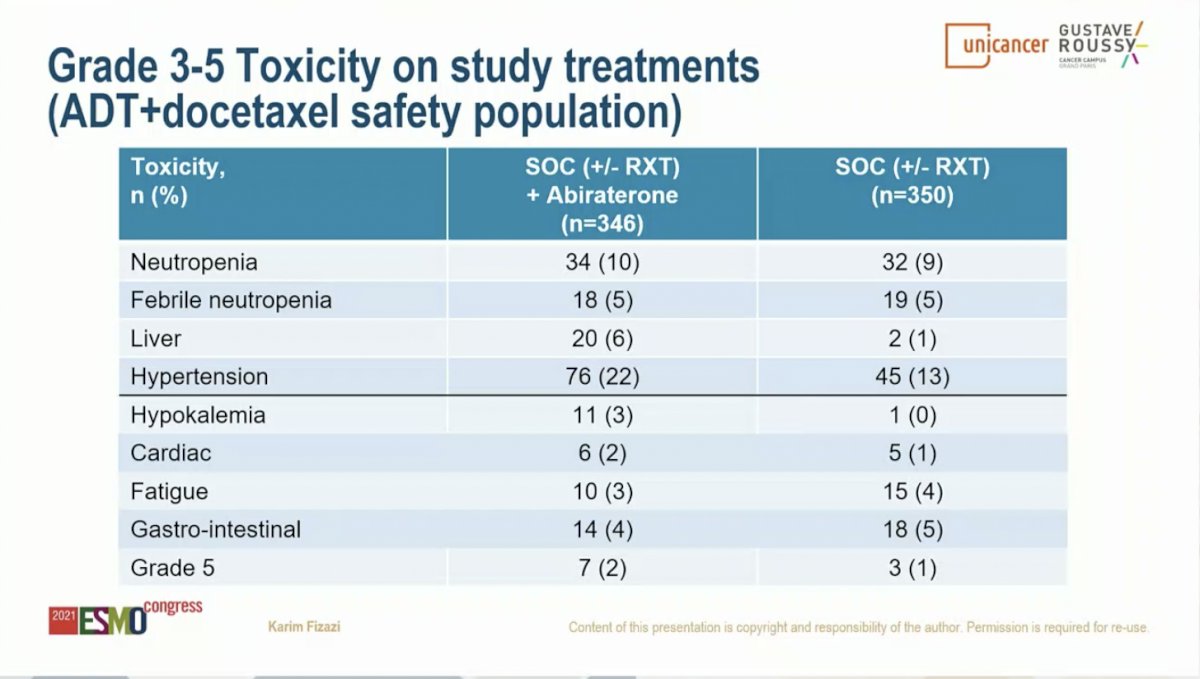 Dr. Fizazi put the PEACE-1 results into context with previous randomized Phase 3 studies for first-line therapy in high-volume de novo mCSPC. Median OS ranged from 33 to 35 months for ADT alone, 40 to 48 months for ADT plus Docetaxel, and 50 to 56 months for ADT plus AAP. The median OS for PEACE-1 was an impressive 61 months. 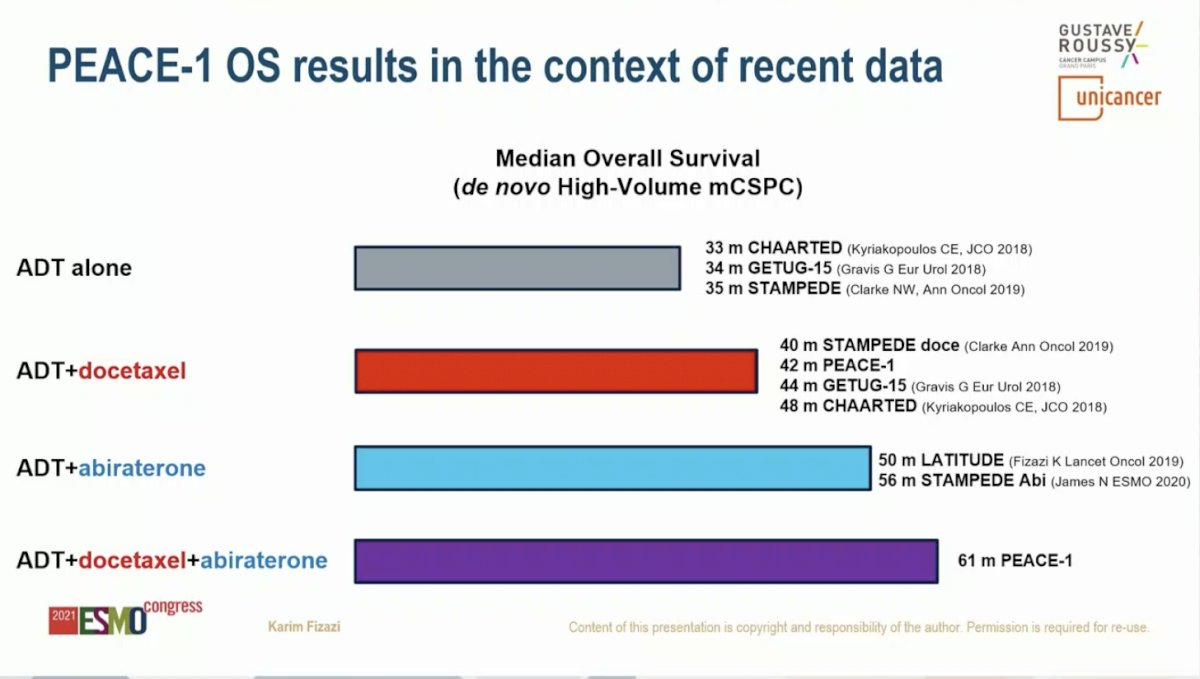 Dr. Fizazi summarized that adding AAP to ADT plus Docetaxel significantly improved median rPFS by 2.5 years in men with de novo mCSPC. OS was also improved with 25% reduction in the risk of death even when 81% of men in the control group subsequently receiving at least one next generation androgen signaling inhibitor. This benefit translates into a median lifetime gain of more than 1.5 years for men with high-volume metastatic disease (3.5 to 5.1 years). OS data for men with low volume disease is immature and updates with be forthcoming. Dr. Fizazi concluded that he believes this data is practice changing and that ADT plus Docetaxel plus AAP should be offered (at least) to men with de novo high-volume mCSPC.