(UroToday.com) Following the presentation from Neeraj Agarwal of the results of expanded cohort 6 of the COSMIC-021 Study utilizing cabozantinib + atezolizumab in men with metastatic castration-resistant prostate cancer (mCRPC), Cora Sternberg provided an invited discussion to contextualize these results in the Proffered Paper session of the European Society for Medical Oncology (ESMO) Annual Congress focusing on prostate cancer genitourinary tumors. She considered the question of immunotherapy and tyrosine kinase inhibitors in mCRPC.

Dr. Sternberg began by emphasizing that, while there have been great advances in immunotherapy in oncology in general and have shown evidence of durable responses, it has relatively limited efficacy in mCRPC, at least among unselected populations. This is perhaps in part because mCRPC is immunogenically “cold” with few tumor-infiltrating T cells. Therefore, if we could convert mCRPC to be immunologically “hot”, immunotherapy may be more efficacious. Cabozantinib may be able to do just that as it promotes an immune-permissive environment.

Dr. Sternberg highlighted sipuleucel-T as one of the few examples in mCRPC in which immunotherapy demonstrates improvements in overall survival. She then highlighted the study design for the COSMIC-021 trial, emphasizing that investigator-assessed ORR was the primary outcome.

She noted that measurable visceral metastases or extrapelvic lymphadenopathy were noted in over three-quarters of patients (77%). Examining disease control rates, disease control rates were very high overall (84%) and particularly among those with measurable visceral metastases or extrapelvic lymphadenopathy (88%). Further, the median duration of response was just under 7 months.

Dr. Sternberg then provided a comparison to a number of other trials which have assessed immunotherapy approaches in chemotherapy-naïve mCRPC. 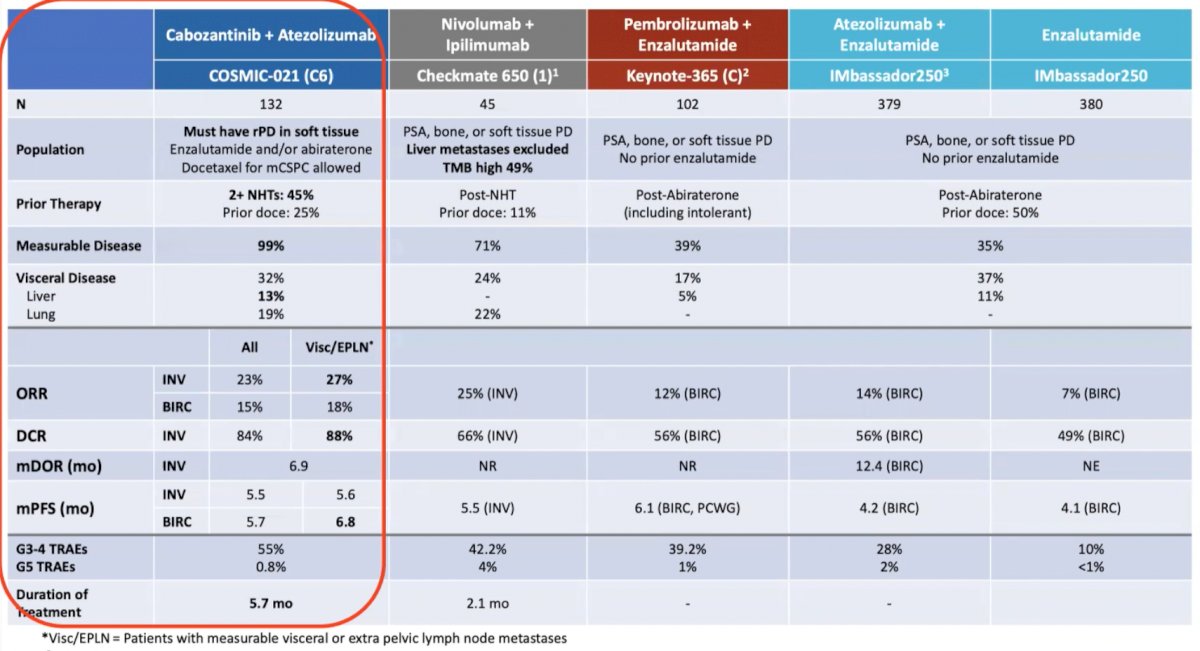 Notably, IMbassador is the only randomized comparison and showed no benefit. However, COSMIC-021 has some notable differences in terms of the study population including the fact that patients must have had progressive soft-tissue disease. In contrast, the other trials included patients based on PSA or bony radiologic progression. Further, disease control rates in COSMIC-021 were higher than in prior studies. Notably, this population was not enriched with patients with PD-L1 positive disease.

On the basis of favorable results in COSMIC-021, Dr. Sternberg highlighted that a phase III trial comparing this treatment approach to a second novel hormonal therapy has been undertaken (CONTACT-02). Notably, this trial is restricted to patients with visceral disease.

Stepping back, Dr. Sternberg emphasized that patients with localized prostate cancer have a nearly 100% five-year survival rate while this drops to 30% for those with metastases. While visceral metastases are defined in the lung, liver, ascites, pleural effusion, and CNS. She highlighted that non-regional lymphadenopathy is a unique and relatively under-studied subset of metastatic disease which may exhibit unique tumor biology. Thus, a further understanding of the molecular and genetic characteristics of this subset of patients is warranted. There is an established role for MET and VEGF-R targeted treatment in patients with bony CRPC and that the use of cabozantinib in this population can have significant beneficial effects. Indeed, cabozantinib monotherapy was studied in men with progression on prior docetaxel, abiraterone, or enzalutamide in the phase III COMET-1 trial. Without biomarker selection, there was no evidence of benefit for cabozantinib versus prednisone.

Notably, in an unselected population, COSMIC-021 was successful. Dr. Sternberg suggested that specific biomarker enrichment may allow for even greater benefit of this treatment approach utilizing immune checkpoint inhibition. This approach is currently being investigated.