Therefore, combining androgen ablation (abiraterone acetate + ADT) with the cytotoxic and immune properties of SBRT and the additional effects of atezolizumab, an anti-PD-L1 immunotherapy, could be a new treatment approach with potential synergistic effects.

Atezolizumab will be administered to men with newly diagnosed mHSPC by IV infusion (1200 mg IV over 60 minutes every 3 weeks) followed after Cycle 1 by abiraterone acetate (1000 mg PO every day with prednisone 5 mg daily), ADT (GnRH analog), and SBRT (7.25-7.50 Gy x 5 fractions to prostate and seminal vesicles every other day starting at Cycle 5 Day 1 ± 5 days) until unacceptable toxicity, protocol defined progression, or 2 years of treatment. Atezolizumab will be continued for a maximum of 2 years. Continuation of abiraterone acetate and ADT beyond 2 years is at the discretion of the treating physician per local standard of care. The study schema for SAABR is as follows: 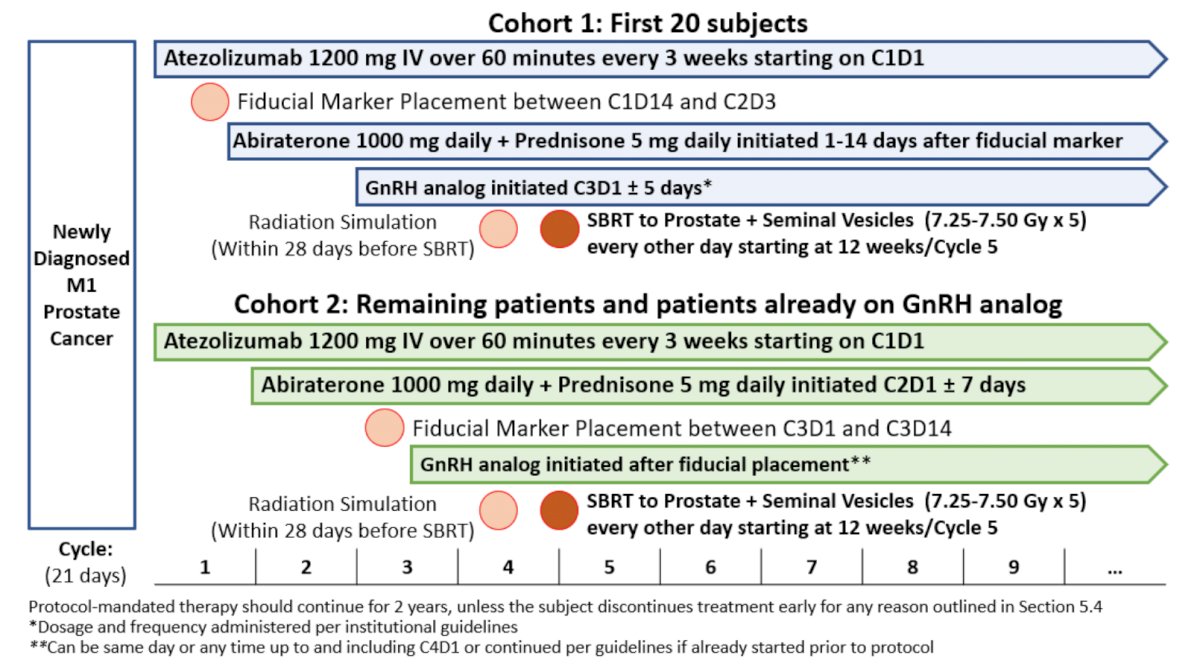 The primary objective of SAABR is to evaluate the failure-free rate at 2 years (binary endpoint), with failure defined as biochemical failure, radiographic progression (as defined by PCWG3), or death from any cause. Secondary objectives include symptomatic skeletal events defined as a symptomatic fracture (surgery or radiation to the bone or spinal cord compression), prostate cancer specific survival, overall survival, and safe and tolerability. For the first 20 patients, a biopsy will be done after initiation of atezolizumab but before abiraterone acetate. For the final 22 patients, biopsy will be done while on both atezolizumab and abiraterone acetate, but before SBRT. Biopsy results at diagnosis and on treatment will be compared for correlative analyses:

Up to 10 subjects who initiated treatment on GnRH analog prior to treatment consent will be enrolled. With the most recent update, 10 of the planned 42 evaluable subjects have been enrolled.