(UroToday.com) As a portion of the European Society for Medical Oncology (ESMO) Annual Congress, an Educational Session focused on the management of patients with node-positive locally advanced prostate cancer was held. In this context, Dr. Silke Gillessen discussed the role of systemic therapy and novel, emerging treatment approaches.

She began by highlighting that clinically node-positive, non-metastatic disease represents approximately 5-10% of newly diagnosed patients if conventional imaging is used for disease characterization and up to 30% if PSMA-PET/CT is employed. While the optimal management is somewhat unclear, the backbone is long-term androgen deprivation therapy (ADT). Given the controversies in this area and a lack of evidence, she emphasized that this forms the basis of questions at the Advanced Prostate Cancer Consensus Conference  (APCCC).

Abiraterone was the most commonly recommended agent to be added to ADT for treatment intensification. Among those patients recommended to receive ADT along with radiotherapy, there was some controversy regarding the recommended duration of ADT: 41% of panelists recommended 1-2 years of therapy while 56% recommended long-term therapy for 24-36 months. No one recommended lifelong ADT.

While these data come from a small panel of experts, Dr. Gillessen emphasized that there is a relative paucity of evidence to inform the treatment of patients in this disease space. A relatively recent systematic review including 5 studies suggested both cancer-specific survival and overall survival benefits to the addition of local therapy to ADT, as compared to ADT alone. While there is relatively limited evidence for the use of surgery here, most would agree that a multi-modality approach is needed regardless of the primary treatment employed. She further emphasized the heterogeneity within this disease ranging from a single node that just meets radiographic criteria to 10 large nodes.

In the context of non-metastatic prostate cancer, Dr. Gillessen highlighted a meta-analysis from 2016 assessing outcomes from the addition of docetaxel to ADT. There was a statistically significant improvement in failure-free survival (HR 0.70) and suggestion of an improvement in overall survival though this was not significant. 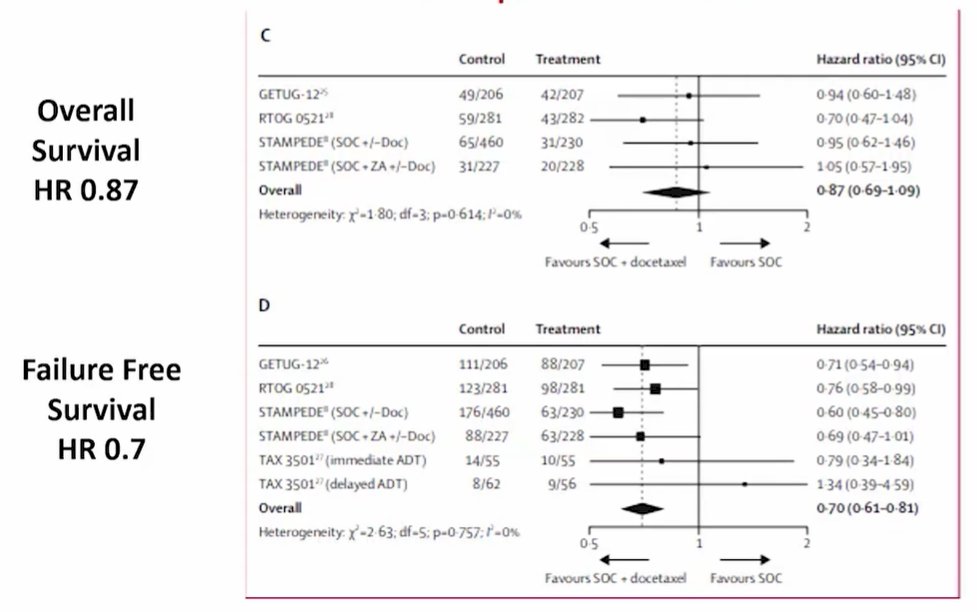 She emphasized that these data did include patients with node-positive disease, though the included cohorts were somewhat heterogeneous. On the basis of these data, however, the addition of chemotherapy is not considered standard of care in patients with non-metastatic prostate cancer who are receiving radiotherapy and ADT.

In contrast, data for abiraterone in high-risk non-metastatic prostate cancer has been presented from the STAMPEDE trial. In those with non-metastatic disease, the addition of abiraterone was associated with a significant improvement in failure-free survival (HR 0.21, 95% CI 0.15 to 0.31) but not statistically significant improvements in overall survival (HR 0.75, 95% CI 0.48 to 1.18). However, these overall survival is immature given the few events observed.

Digging deeper, among the 915 included patients with non-metastatic disease, a posthoc analysis suggests improvements in metastasis-free survival for clinically node-positive patients who received abiraterone in addition to the standard of care. 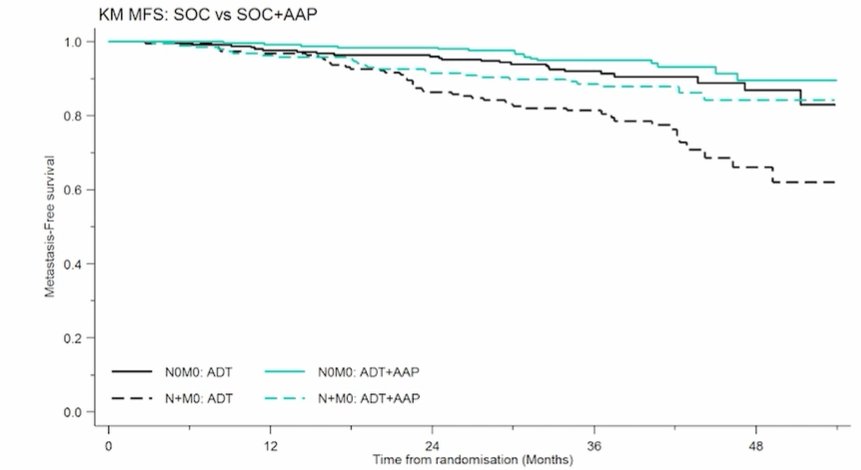 Similar phenomena were observed when the authors assessed failure-free survival, instead of metastasis-free survival. Thus, while predicated on subgroup analyses, the addition of abiraterone to ADT shows what Dr. Gillessen described as interesting failure-free survival benefits in early analyses. Additionally, she emphasized that there is a short follow-up to date, though ongoing follow-up is planned along with an analysis of treatment with enzalutamide.

Dr. Gillessen then highlighted a variety of guideline recommendations on the management of patients with cN1 M0 disease. While NCC recommends EBRT + ADT +/- abiraterone as a preferred approach among those who have a long life expectancy or symptomatic disease (with observation or ADT alone for those with shorter life expectancy), the EAU simply recommends patients be offered local radical treatment plus long-term ADT and ESMO offers no specific recommendation.

However, there are a number of ongoing trials which will help to further inform treatment choices. The DASL-HiCaP trial is assessing the role of darolutamide in patients with very high-risk locally advanced prostate cancer in addition to ADT and radiotherapy (either primarily or postoperatively). The study is designed to assess whether the addition of darolutamide can improve metastasis-free survival at 5-years from 85% to 91%.

She further highlighted many other ongoing trials, primarily assessing various aspects of treatment intensification with the addition of second-generation androgen axis inhibition.

However, she emphasized that none of these trials are specific for patients with cN1 disease. Thus, we continue to rely on subgroup analysis. Further, none of these will assess the question of the optimal local treatment approach. Additionally, the PREDICT-RT trial will assess the role of treatment escalation and de-escalation according to genomic risk scores to potentially allow for more personalized treatment approaches.

Presented by: Silke Gillessen, MD, Head of the Department of Medical Oncology, full Professor at the Università della Svizzera Italiana (USI) in Lugano, and Director of the Oncology Institute of Southern Switzerland (IOSI) in Bellinzona, Switzerland.