Dr. Suarez started by discussing the HIF-2alpha inhibitors, noting that under loss of VHL function, HIF-alpha accumulates within tumor cells and dimerizes with HIF-beta. This complex transcriptionally activates hypoxia response elements related to adaptive mechanisms to hypoxia. HIF-2alpha is a subunit that has a central role in clear cell RCC over HIF-1alpha; PT2385 and PT2399 are HIF-2alpha antagonists that have shown greater activity than VEGFR inhibitors in xenograft models and have shown tolerable safety results in a Phase I clinical trial (side effects including anemia, fatigue, and peripheral edema).

Belzutifan (PT2977, MK-6482) is a second-generation HIF-2alpha inhibitor. First presented at ASCO 2020 was the phase I/II study of the oral HIF-2alpha inhibitor MK-6482 in patients with advanced clear cell renal cell carcinoma, comprising 55 clear cell RCC patients with at least one line of prior therapy. This trial reported an ORR of 24% and a clinical benefit rate of 80%, with a median duration of response that was not reached, and a median PFS of 11 months. Adverse events in this trial included anemia (all grades: 75%; grade 3: 26%) and hypoxia (grade 3: 26%).

Subsequently presented at ESMO 2020 was the phase 2 study of MK-6482 for VHL disease-associated clear cell renal cell carcinoma. Among 61 patients in this trial, 92% of patients had a decrease in the size of their target lesion, with an ORR of 36.1%. At a median follow-up of 68.7 weeks, responses appear to be durable, with 98% of patients free of progression at 52 weeks: 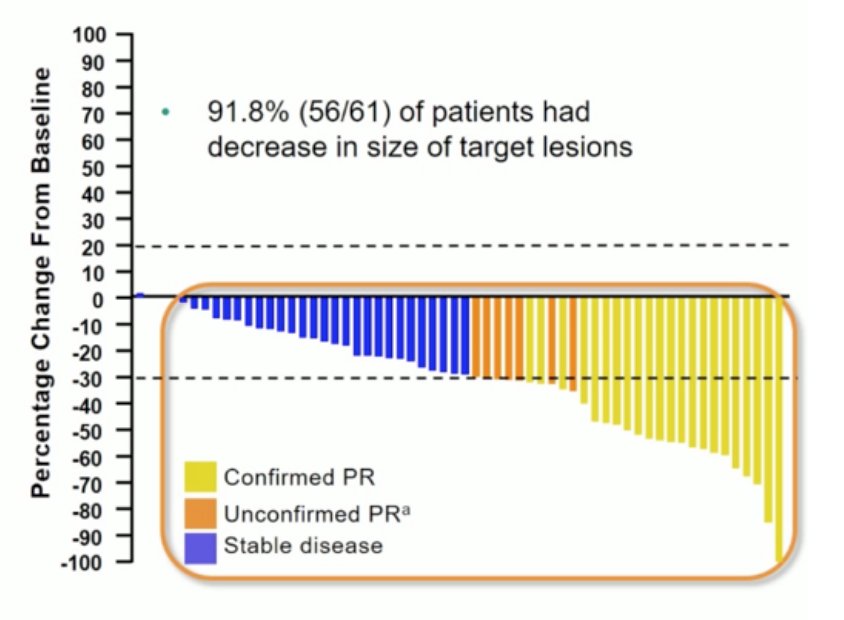 Work from this trial led to the FDA approval of belzutifan for cancers associated with VHL disease on August 13, 2021.

Then at GU ASCO 2021, Dr. Toni Choueiri and colleagues presented results of a phase 2 trial of MK-6482 in combination with cabozantinib in patients with advanced clear cell RCC. This trial comprised patients in cohort 1 (treatment-naïve) and cohort 2 (previously received immunotherapy and/or TKIs), with the focus of the GU ASCO 2021 presentation being on cohort 2. The confirmed ORR was 22.0% with 9 partial responses, and 90.2% of subjects displayed any tumor shrinkage. Disease control rate, as defined as CR+PR+SD, was 92.7%:

Other HIF-2alpha inhibitors have also been tested in combination therapy, including PT2385 + nivolumab. In this phase 1 trial presented at GU ASCO 2019, there were 50 patients treated with the combination therapy, with an ORR of 22%, a stable disease rate of 42%, and a median PFS of 7.3 months.

Dr. Suarez then discussed sitravatinib (MGCD516), a potent inhibitor of a closely related spectrum of receptor tyrosine kinases, which play an important role in RCC and are implicated in resistance to angiogenesis inhibitors. This includes the TAM family of split RTKs (VEGFR2, PDGFR, KIT), RET, and MET. Sitravatinib may augment antitumor immune responses by reversing the tumor microenvironment by reducing myeloid-derived suppressor cells (MDSCs) and regulatory cells (Tregs), as well as increasing the ratio of M1/M2 polarized macrophages. A phase 1B trial of sitravatinib (n=32) was presented at the GU ASCO 2020 annual meeting, with an ORR of 25% and a clinical benefit rate of 94%. Subsequently, a phase 2 study of sitravatinib + nivolumab was presented at GU ASCO 2021 with translational data showing that sitravatinib monotherapy resulted in strong down-regulation of T angiogenesis biomarkers, and sitravatinib + nivolumab increasing immune cell infiltration and proliferation of CD8+ T cells.

Dr. Suarez then discussed immunotherapy and agents for enhancing the immunotherapy response. NKTR-214 (bempegaldesleukin) is a clinical-stage biologic that comprises interleukin-2 protein bound by multiple releasable PEG chains, has a short half life, but has systemic side effects, such as hypotension and vascular leak-syndrome (only used in specialized centers). IL-2 stimulated not only CD8 positive antitumor T cells but also immunosuppressive regulatory T-cells, potentially limiting its clinical efficacy. NKTR-214 has been tested in combination with nivolumab in a phase 1 dose-escalation study among 21 RCC patients,1 noting an ORR of 71.4% in the first-line setting and ORR of 28.6% in the second-line (immunotherapy naïve) setting: 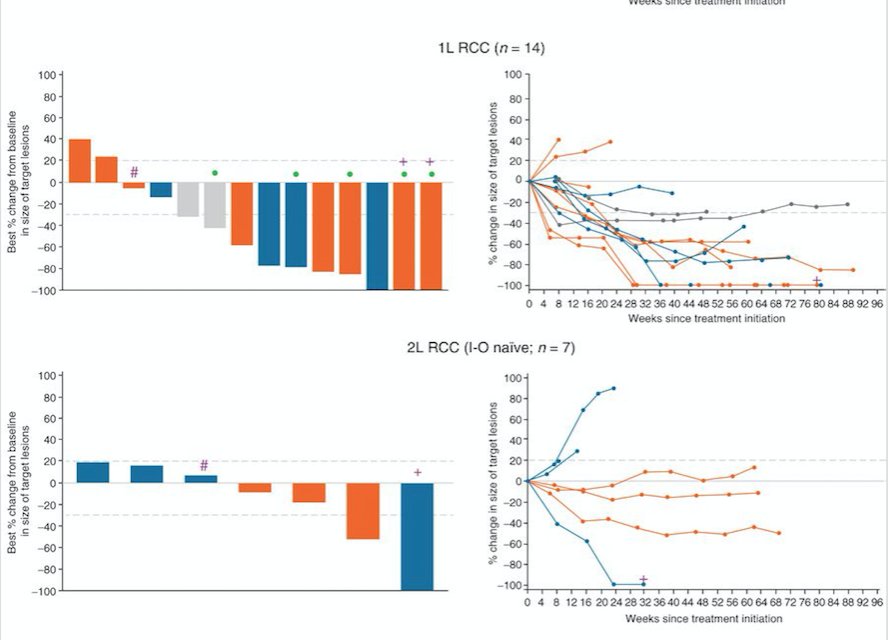 Currently ongoing is the PIVOT-09 phase 3 trial randomizing previously untreated RCC patients to ARM A (bempegaldesleukin + nivolumab) versus ARM B (investigator’s choice of sunitinib or cabozantinib):

ALKS 4230 is a novel IL-2R agonist that is a stable fusion protein that is intrinsically active immediately upon systemic entry and does not require metabolic activation or the need to undergo modification while circulating. ALKS 4230 selectively binds to the intermediate-affinity IL-2R to preferentially activate and expand CD8+ and NK cells without expanding CD4+Tregs. The ARTISTRY-1 phase 1/2 study testing ALKS 4230 is as follows:

Initial results of this trial were presented at ASCO 2021 with some activity in the monotherapy arm and in combination with pembrolizumab (trial is ongoing) among RCC patients included in this trial.

The CXCR4 chemokine receptor is expressed in many tumors, including clear cell RCC, where it promotes angiogenesis and enhances tumor infiltration by myeloid-derived suppressor cells and T regulatory cells. Additionally, CXCR4 has been shown to be involved in progression and metastasis of RCC, with high expression of CXCR4 associated with poor PFS and OS. X4P-001 is an oral, selective, allosteric inhibitor of the chemokine receptor CXCR4. X4P-001 has been tested in combination with axitinib in a phase 1 dose-escalation (n=16) and phase 2 expansion (n=55) trial with an ORR of 23% and complete response rate of 2%.

There are several novel immune checkpoints that are under investigation as highlighted by Dr. Suarez:

CBM-588 is a live bacterial product comprised of C. butyricum and there have been retrospective data to suggest that it can augment the activity of checkpoint inhibitors in NSCLC which may occur via immunomodulation of the gut and/or alteration of gut microbioma composition. At the ASCO 2021 meeting the first results of a phase IB trial comparing nivolumab + ipilimumab with or without CBM-588 were presented. The trial design for this trial is as follows.

The primary endpoint for this trial was change in Bifidobacterium species from baseline to week 12 and the secondary endpoints were PFS, response rate, and toxicity. Metagenomic sequencing of paired stool specimens showed an 8-fold increase in B. bifidum and a 6-fold increase in B. adolescentis in patients receiving nivolumab + ipilimumab + CBM-588 from baseline to week 12:

Dr. Suarez notes that there are several hallmarks of tumor and immune cells in the tumor microenvironment. Changes in tumor metabolism ensure an effective energy supply for tumor growth and contribute to the inhibition of the antitumor response. Immunosuppression in the tumor microenvironment is often based on the mutual metabolic requirements of immune cells and tumor cells. Depleted essential T-cell nutrients include glucose, arginine, oxygen, and glutamine. Elevated T-cell suppressive metabolites include lactate dehydrogenase, kynurenine, and adenosine. These may be targets for RCC therapeutics.

Adenosine production in the tumor leads to immunosuppression through A2aR on infiltrating immune cells, which is a potential mechanism of resistance to anti-PD-1/PD-L1 therapy. CPI-444 is an oral adenosine A2a receptor antagonist single-agent showing anti-tumor activity in pre-clinical models and synergistic effect in combination with immune checkpoint inhibitors. Ciforadenant (CPI-444) has been tested in a phase I clinical trial of 68 patients with pre-treated metastatic RCC either treated with ciforadenant alone or in combination with atezolizumab.2 For patients receiving combination ciforadenant + atezolizumab the disease control rate was 39% compared to 17% for ciforadenant alone.

The final topic Dr. Suarez discussed was the role of PARP inhibitors in the treatment of metastatic RCC. VHL loss impairs cellular DNA double-strand break repair by homologous recombination and induces sensitivity to DNA damaging agents such as PARP inhibitors. In preclinical studies, VHL deficiency confers increased sensitivity to PARP inhibitors. Further rationale for combining immunotherapy with PARP inhibitors in RCC is based on 43/229 RCC patients who have a deleterious DDR mutation, most commonly CHEK2 and ATM. Deleterious DDR status was associated with superior OS for patients treated with immunotherapy (HR 0.41, p = 0.049), with no association seen for patients treated with VEGF-TKI.3 There are several trials in progress with PARP inhibitors in RCC, as highlighted in the following table: