(UroToday.com) The Realizing Potential Combination and Personalized Therapy educational session at the European Society for Medical Oncology (ESMO) 2021 congress included a presentation by Dr. Toni Choueiri discussing whether there is an optimal first-line combination approach for metastatic renal cell carcinoma (RCC). The current first-line combination therapies that are FDA approved are listed as follows: 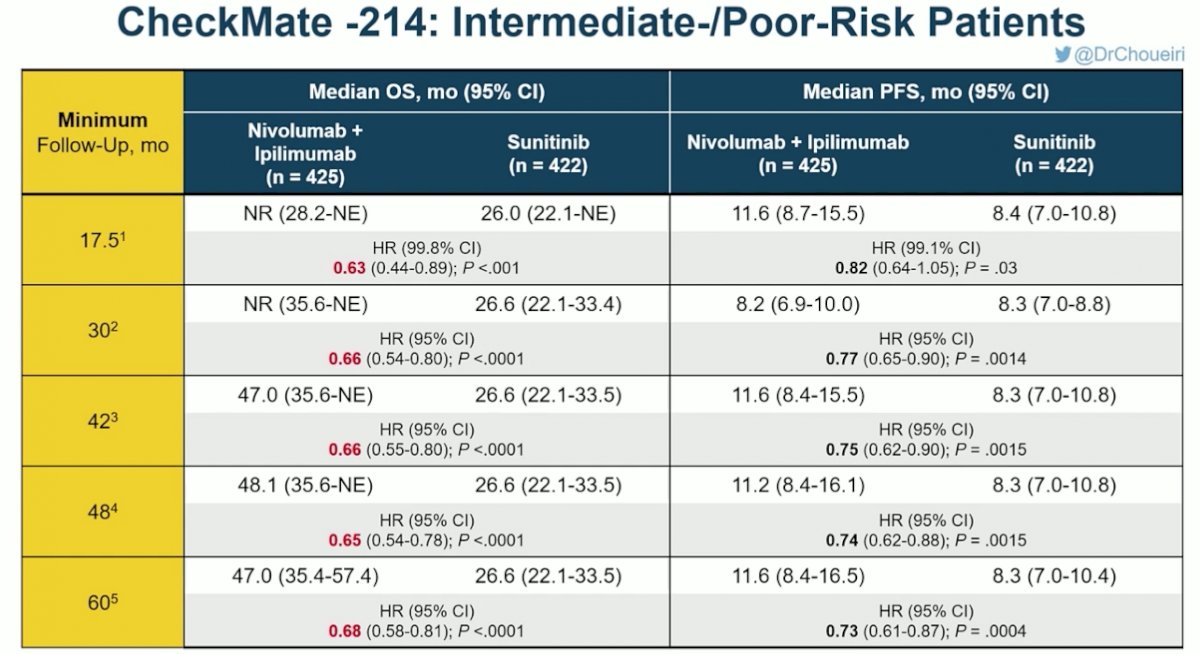 Dr. Choueiri then discussed the multitude of IO + VEGF combination therapies. There is a rationale for combining immunotherapy with VEGF-targeted therapy, including (i) normalization of the tumor vasculature for increased T-cell tumor infiltration, (ii) establishing an immune-permissive tumor microenvironment by decreasing MDSC and Treg populations, (iii) promotion of T-cell priming and activation via dendritic cell maturation. As follows are the four trials that have been approved in the first-line IO + VEGF combination therapy disease space: 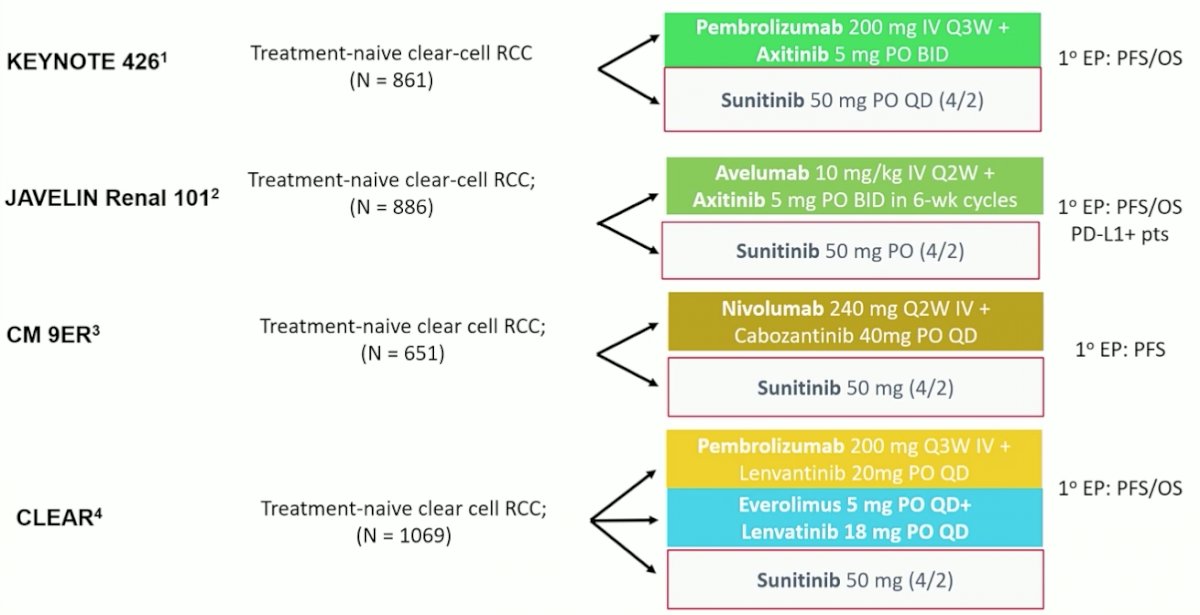 In KEYNOTE-426, 861 patients with metastatic clear cell RCC, predominately with intermediate or poor-risk disease, who had not previously received systemic therapy were randomized to pembrolizumab + axitinib or sunitinib and followed for the co-primary endpoints of overall survival and progression-free survival.2 While median OS was not reached, patients who received pembrolizumab + axitinib had improved OS (HR 0.53, 95% CI 0.38 to 0.74) and progression-free survival (HR 0.69, 95% CI 0.57 to 0.84), as well as overall response rate. These results were consistent across subgroups of demographic characteristics, IMDC risk categories, and PD-L1 expression level. Grade 3 to 5 adverse events were somewhat more common among patients getting pembrolizumab and axitinib, though rates of discontinuation were lower. The most recent updated follow-up of this trial was presented at ASCO 2021, showing a durable survival benefit for pembrolizumab + axitinib (HR 0.73, 95% CI 0.60-0.88): 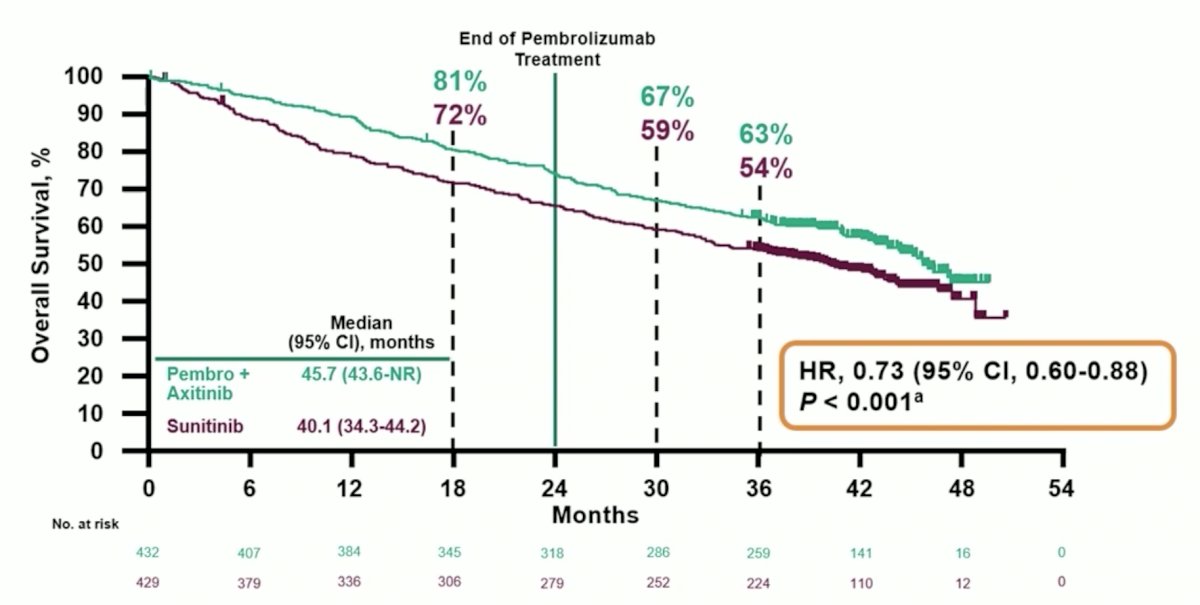 Although the PFS and ORR results have remained stable for pembrolizumab + axitinib with longer follow-up, the OS benefit has become less impressive (but still significant) likely secondary to secondary therapy following the trial period:

In the CheckMate 9ER trial, 651 patients were randomized in a 1:1 fashion to nivolumab + cabozantinib or sunitinib, in the first-line treatment of patients with advanced or metastatic renal cell carcinoma, with randomization was stratified by IMDC risk score, tumor PD-L1 expression, and region.4 The primary outcome was progression-free survival with overall survival, objective response rate, and toxicity comprising important secondary outcomes. Over a median follow-up of 18 months, median progression-free survival was significantly longer among those randomized to nivolumab + cabozantinib (16.6 months) than those randomized to sunitinib (8.3 months), with a relative difference of 49% (HR 0.51, 95% CI 0.41 to 0.64): 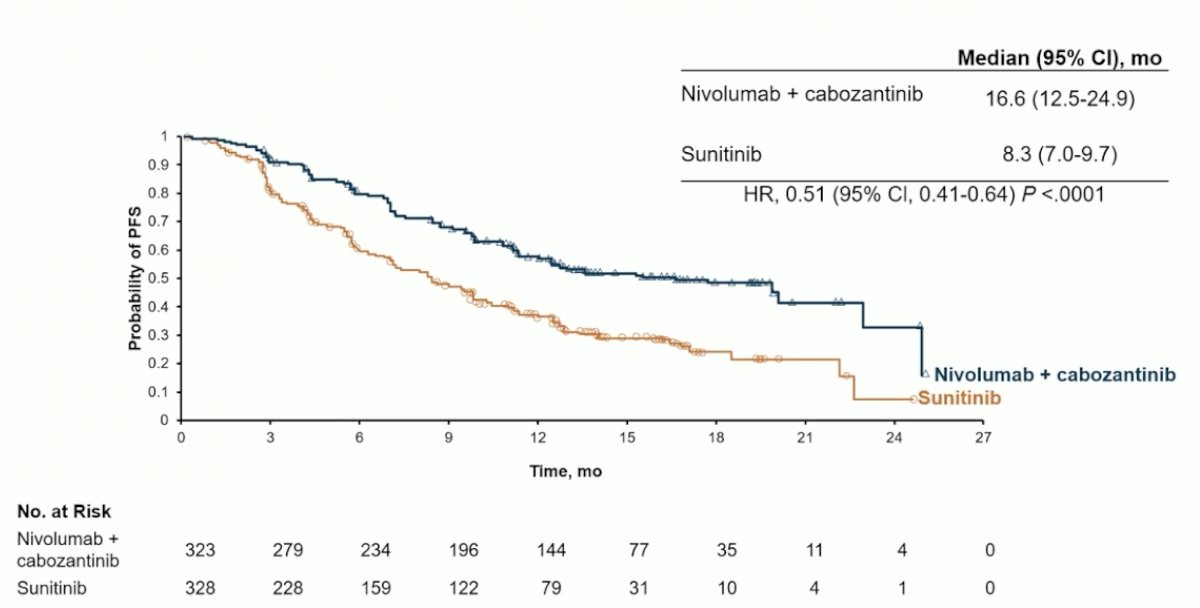 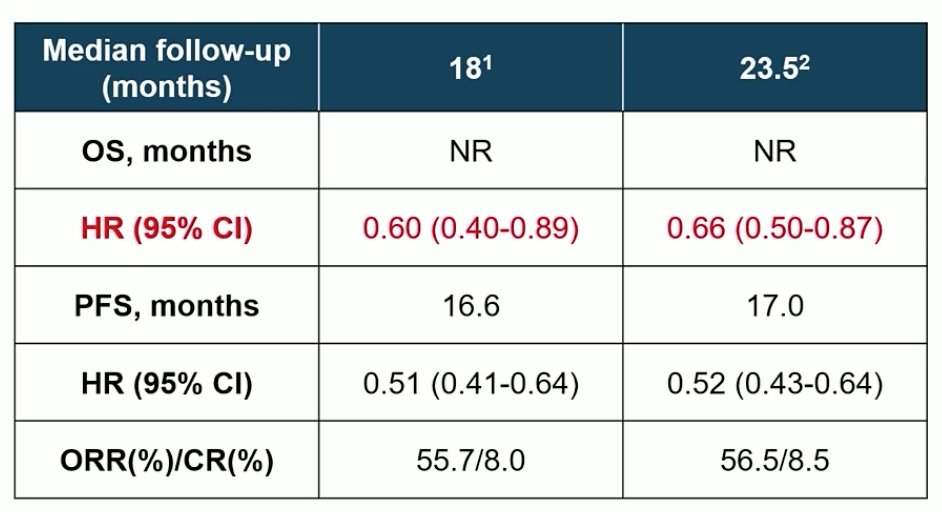 There are several take-home messages from the IO/IO or IO/TKI combination trials, including pros and cons as listed:

Dr. Choueiri notes that it is difficult to compare outcomes across these trials, given that even when assessing the IO/TKI trials that have a proven survival benefit (KEYNOTE-426, CheckMate 9ER, and CLEAR), they all have different baseline characteristics, specifically different proportions of IMDC risk groups: 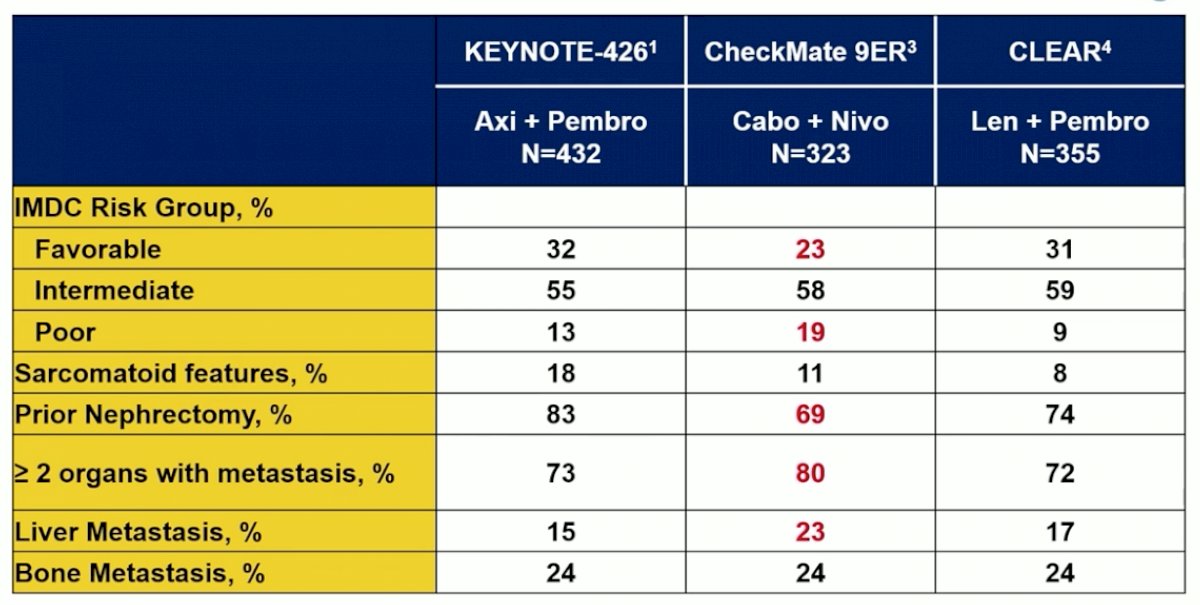 Even comparing the quality of life data from the phase 3 studies (vs sunitinib) is difficult, since there are different instruments used across studies, assessed at different time points, variable compliance, thus making comparisons between studies challenging.

Among the IO + TKI trials that have an overall survival benefit in the ITT population, in the favorable risk groups, all of these trials have a PFS benefit, but no trial has an OS benefit:

Dr. Choueiri notes that in his opinion an OS benefit in favorable-risk patients for IO + TKI treatment may be elusive, given the limited number of patients, a limited number of events, and indolent disease with available second-line options.

The other population Dr. Choueiri highlighted was patients with metastatic RCC with sarcomatoid features. In CheckMate 214, the combination of nivolumab + ipilimumab demonstrated an OS benefit with a HR of 0.45 (95% CI 0.30-0.70) compared to sunitinib in this challenging subgroup: 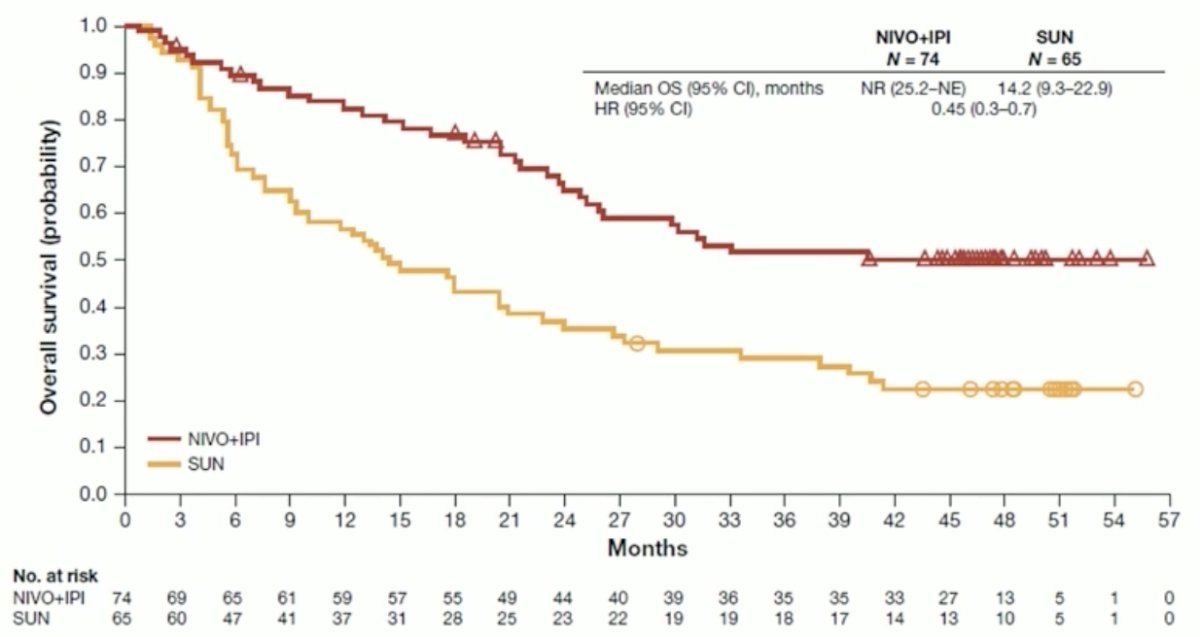 Sarcomatoid RCC tumors are characterized by an immune-inflamed phenotype, leading to activation of immune pathways, increased expression of antigen-presenting machinery genes, increased cytotoxic immune infiltration, and high PD-L1 on tumor cells. Standard of care for these patients according to Dr. Choueiri should be nivolumab + ipilimumab.

As of 2021, Dr. Choueiri’s own, evolving approach to the first-line treatment of metastatic RCC is as follows:

Dr. Choueiri concluded this presentation of the first-line treatment options for metastatic RCC with the following take-home points: