He began by describing EphrinB2, a transmembrane protein expressed in capillary endothelial during development (during the embryonic period primarily) which ceases to be expressed in adults. However, it is re-expressed in tumors and their related blood vessels. EphB4 is a related, high-affinity cognate receptor with similar longitudinal expression patterns. The interaction of these two molecules activates bidirectional signaling which promotes tumor progression through effects on cell viability, angiogenesis, and immune cell response. These two molecules are highly expressed in urothelial tumors and are associated with a negative prognosis.

Mechanistically, a soluble receptor (sEphB4-HSA) may block the interaction of these two molecules by occupying EphrinB2. The authors hypothesized that the effect of this agent would be synergistic with anti-PD-1/PD-L1 antibodies to improve anti-tumor activity.

The authors sought to assess the feasibility of a combination of pembrolizumab and sEphB4-HSA including estimation of OS, PFS, ORR, and DOR. The authors further assessed correlative outcomes, including biomarker studies.

The authors enrolled patients with platinum-refractory mUC who had not received prior anti-PD-1/PD-L1 therapy. They targeted up to 70 patients to ensure 60 would be evaluable. Patients received pembrolizumab 200mg IV q3 weeks + B4 10mg/kg IV weekly in a 21 day cycle until progression (PD) or unacceptable toxicities. The authors assess response by CT chest/abdomen and pelvis every 6 weeks, interpreted per RECIST 1.1. The primary endpoint was tolerability and overall survival (OS) while secondary endpoints included progression-free survival (PFS), duration of response (DOR), and objective response rate (ORR) as well as correlative studies. Tumor tissue for all evaluable patients was tested for B2 by Immunohistochemical (IHC) staining. 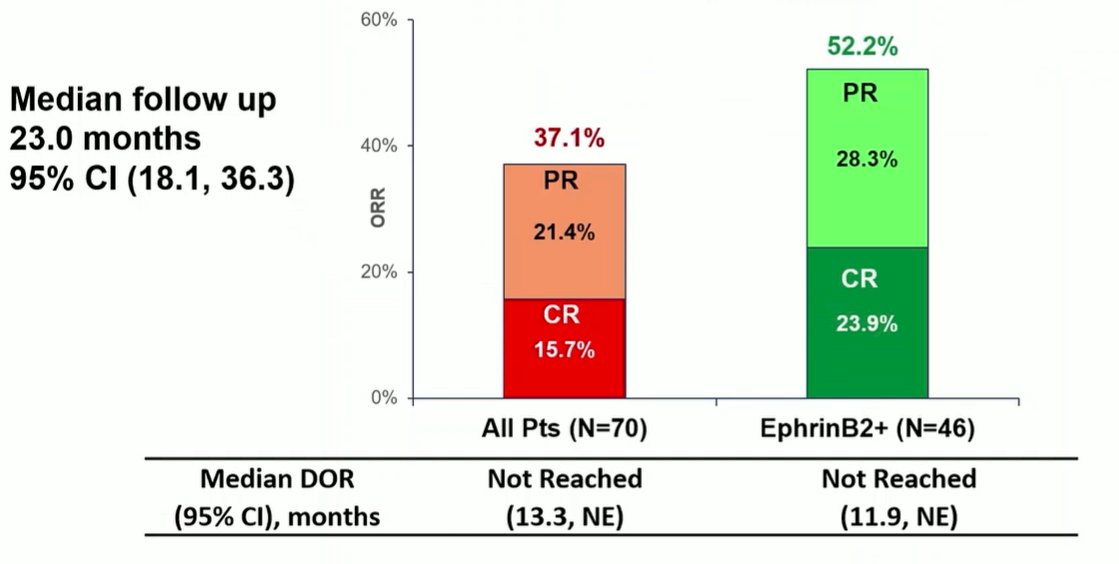 As highlighted in the following swimmer’s plot, the majority of responders had a prolonged duration of response which continues at the time of data cut-off. Additionally, a proportion of patients maintained response after ceasing therapy. 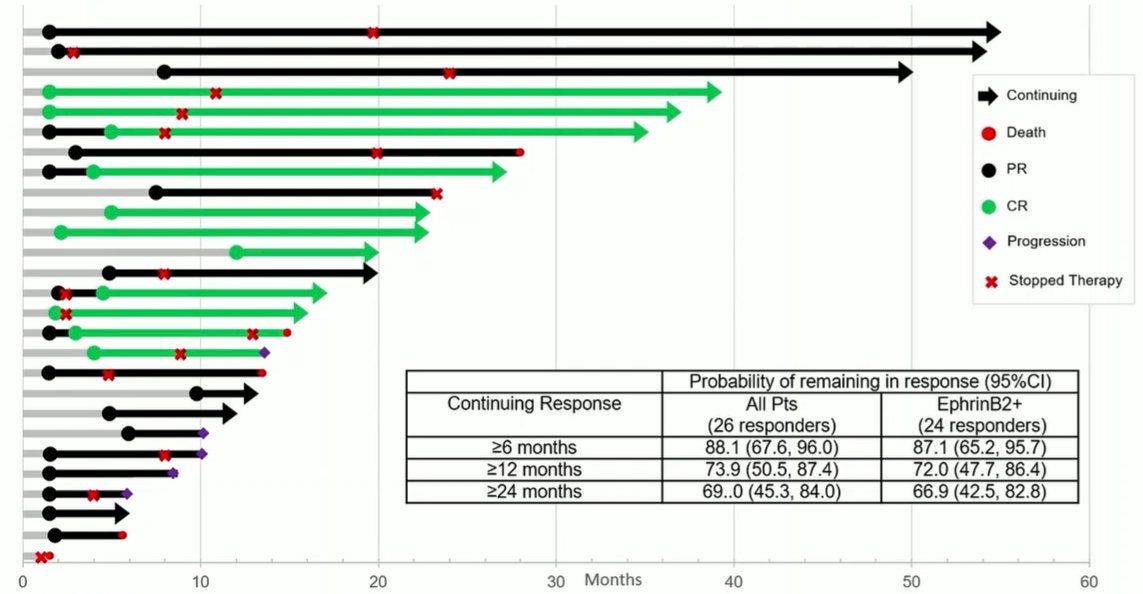 In terms of toxicity, there were no additive effects. The most frequent effect was hypertension which could be medically managed.

Dr. Sadeghi concluded that this combination regime of pembrolizumab and sEphB4-HSA was well tolerated and demonstrated synergistic activity. Additionally, EphrinB2 has the potential to be a predictive biomarker of response. Based on these data, the FDA granted a breakthrough designation on September 1, 2021, for this regime in EphrinB2 positive patients. A phase III trial is in development.