(UroToday.com) In this presentation, Dr. Enrique Grande discussed the results of the GETUG/AFU VESPER V05 Phase III Trial and the Phase II trial of pembrolizumab plus sEphB4-HSA in metastatic urothelial carcinoma (UC). These two studies led to exciting results with the potential to impact practice for patients with urothelial carcinoma in the future.

Dr. Grande started with commentary on GETUG/AFU VESPER V05, which randomized men with muscle-invasive bladder cancer to received perioperative dose-dense MVAC (ddMVAC) versus gemcitabine plus cisplatin (GC). He began by acknowledging that this trial did not meet the pre-specified threshold of statistical significance for the primary endpoint – three-year progression-free survival in the overall intention-to-treat cohort: the HR was 0.77 (95% CI 0.57-1.02) with an adjusted P-value of 0.077. However, as 88% of patients in the intention-to-treat cohort received neoadjuvant chemotherapy, with the remaining 12% receiving adjuvant chemotherapy, this is ultimately a study of neoadjuvant therapy. As such, he felt it was justified to analyze the neoadjuvant cohort, despite it not being the primary endpoint. He next drew attention to a strength of the study – the primary endpoint, three-year PFS, may be more clinically relevant than pathologic complete response (CR) rate, which is a common primary endpoint for neoadjuvant studies. 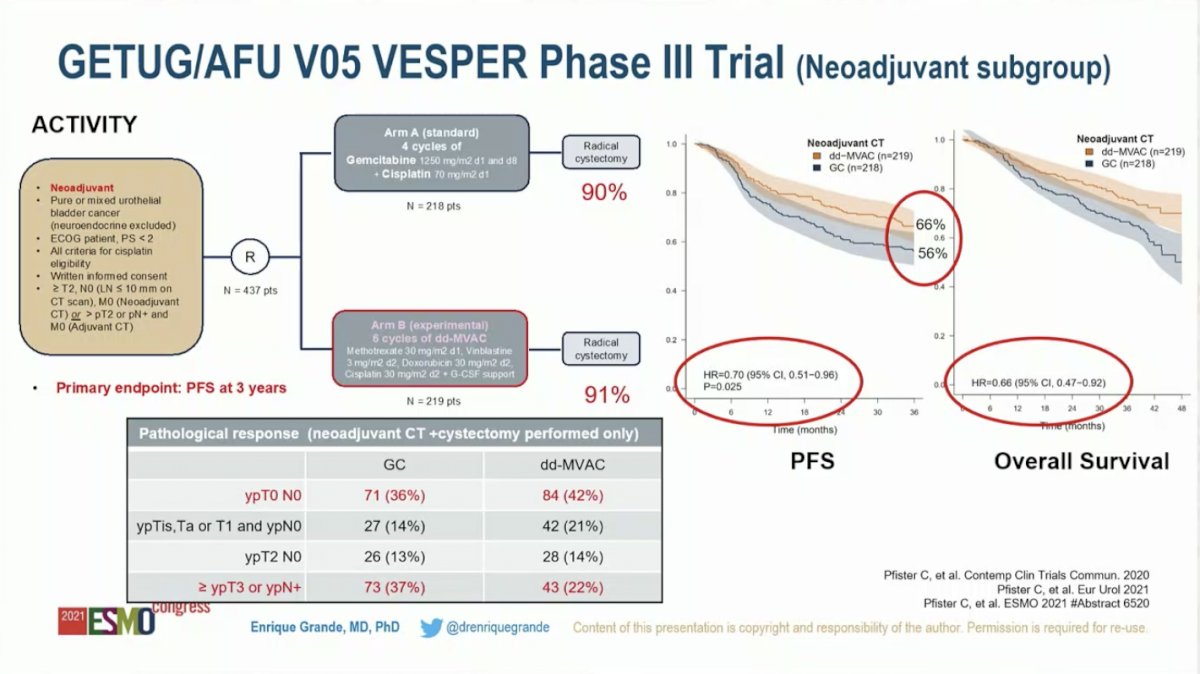 To put this data into historical context, Dr. Grande compared the control arm (GC) to prior studies, noting that pathologic CR rate in this study (36%) was comparable to that reported for patients treated with GC on the SWOG-1314 trial (35%). Next, he compared the ddMVAC pathologic CR rate in this study (42%) to five previously published trials (range 26-38%). He noted that 4 cycles of GC are standard, while the VESPER trial employed 6 cycles. Although it’s not possible to draw a definitive conclusion from cross-trial comparisons, he raised the question of whether the VESPER ddMVAC arm did better than historical trials because patients received more cycles. The final comparison he raised was the VESPER ddMVAC arm with novel chemotherapy plus immunotherapy combinations. Notably, the 42% pathologic CR rate for ddMVAC in VESPER did not appear to be superior to GC plus Nivolumab (49%), GC plus pembrolizumab (36%), or GC plus atezolizumab (44%). 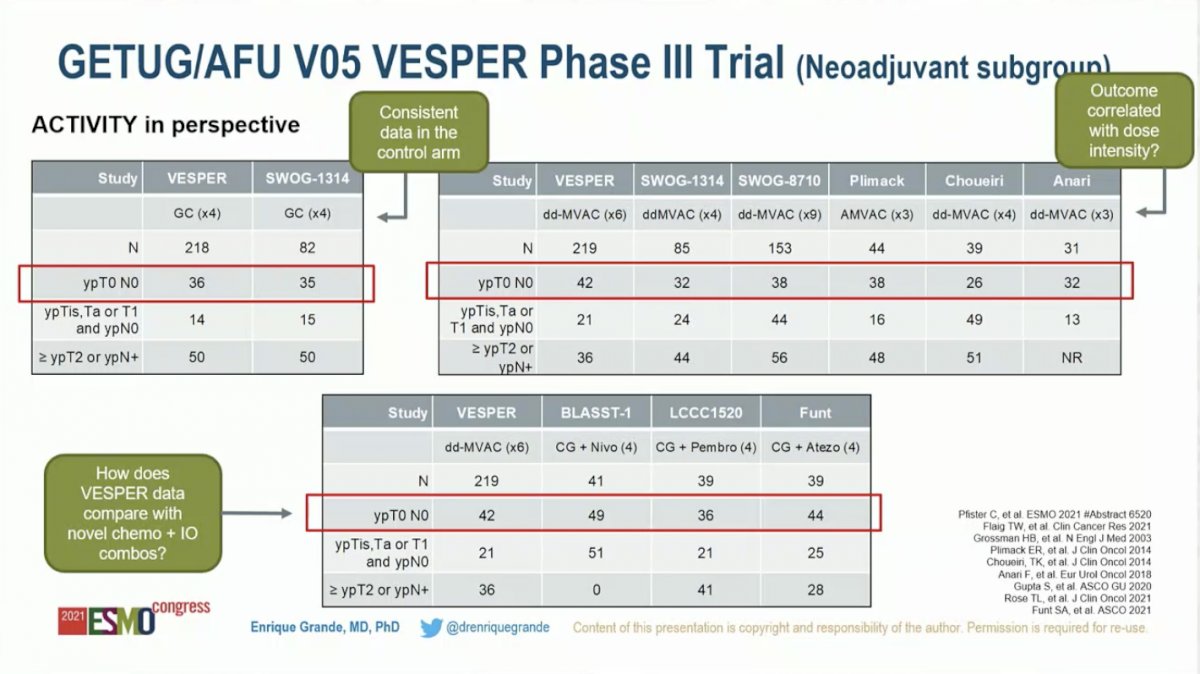 Dr. Grande concluded that these results are potentially practice-changing. ddMVAC appears to have greater activity in the neoadjuvant setting for patients with MIBC, but there is a clear cost to the higher clinical activity and that ddMVAC may therefore not be appropriate for all patients. With several Phase 3 randomized clinical trials of immunotherapy and targeted therapies ongoing, he raised the question of whether the control arms should be updated to include ddMVAC to reflect this new data.

Moving on to the second abstract, Dr. Grande discussed the results of the Phase II Trial of pembrolizumab plus sEphB4-HSA in metastatic UC. He began with a review of bidirectional signaling of Eph receptors and Ephrins in urothelial carcinoma. Eph receptor tyrosine kinases and their ephrin ligands are present in cancer cells, launching complex bidirectional signaling involved in angiogenesis, EMT, tumor development, and immune suppression. EphrinB2 and EphB4 are expressed in 34% and 94% of UC and correlated with poor outcomes based on TCGA data. sEphB4-HSA is a fusion protein of soluble EphB4 and albumin that binds to EphrinB2.

He then summarized the study design and results of the Phase 2 trial of pembrolizumab in combination with sEphB4-HSA in 70 patients with metastatic UC. Patients had to be PD1/PDL1 naïve and most (91%) had progressed on prior platinum chemotherapy. Dr. Grande raised the important point that with maintenance Avelumab following first-line platinum-based chemotherapy being widely adopted as the standard of care based on the JAVELIN 100 results, this patient population will be diminished in clinical practice. 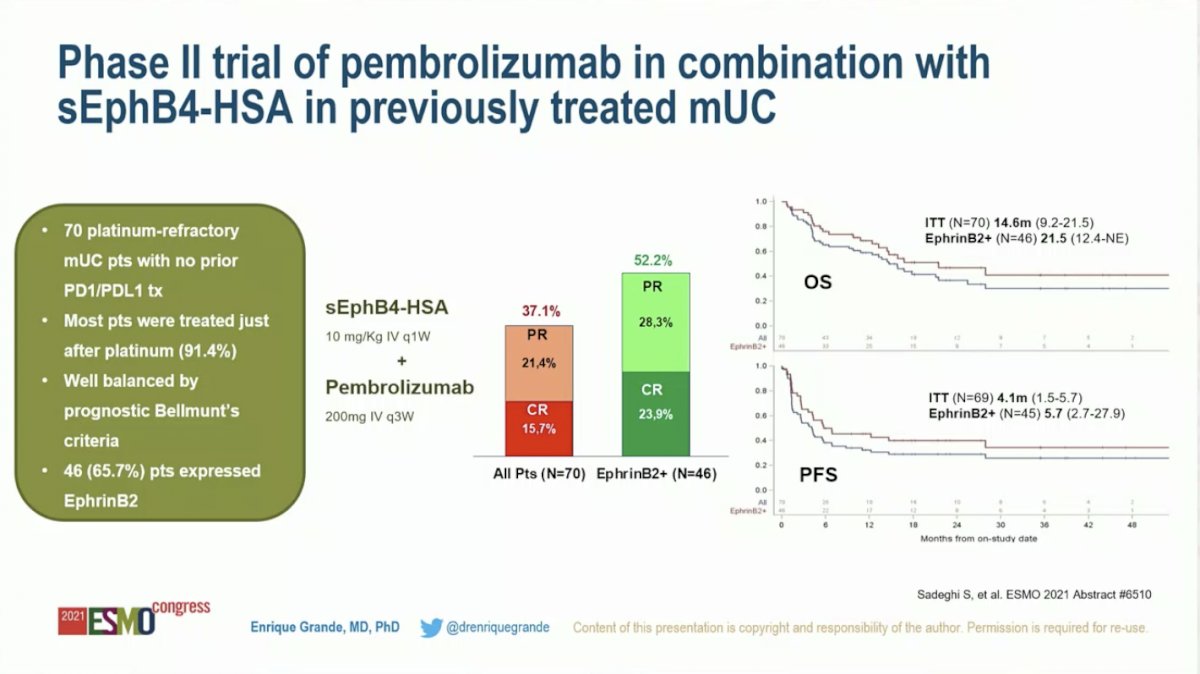 Further discussing EphrinB2 as a predictive biomarker, he put the results into historical context. The ORR for sEphB4-HSA plus pembrolizumab in the EphrinB2-positive cohort (approximately two-thirds of the overall cohort) of 52.2% compares favorably to other therapies in biomarker-selected and unselected populations with metastatic UC. However, he noted that these results must be interpreted with caution as small, non-randomized trials may not be reproduced in a large, randomized trial. 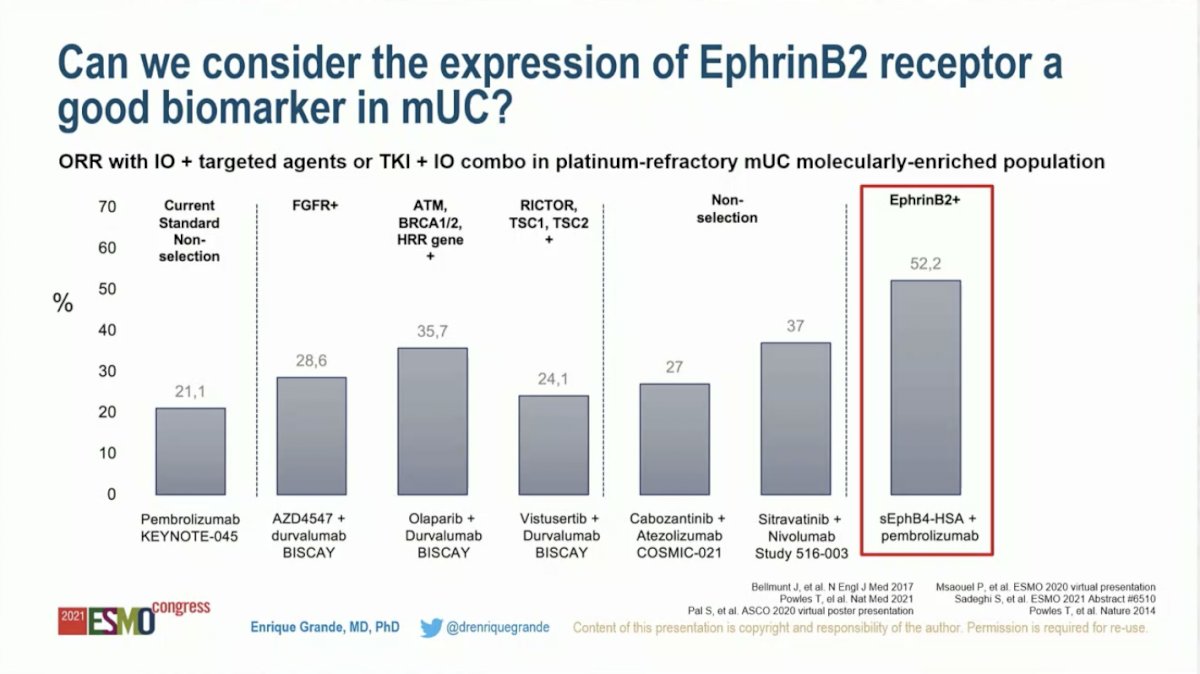 Dr. Grande concluded that the combination of sEphB4-HSA plus pembrolizumab is a promising new therapy for patients with metastatic UC. However, several unanswered questions remain. Will sEphB4-HSA activity correlate with levels of EphrinB2? Is there a correlation between EphrinB2 and PDL1 expression? What is the activity of chemotherapy or novel antibody-drug conjugates in EphrinB2-positive patients? Finally, what is the optimal disease setting for this therapy? Despite these unanswered questions, sEphB4-HSA plus pembrolizumab is undoubtedly an exciting new drug combination in UC.