(UroToday.com) In this presentation, Dr. Sarmad Sadeghi discussed the results of the phase 2 trial of pembrolizumab in combination with sEphB4-HSA in previously treated patients with metastatic urothelial carcinoma (UC). The trial showed promising preliminary results for this novel systemic therapy approach.

As EphrinB2 and sEphB4-HSA are unfamiliar to many in the field, Dr. Sadeghi opened with an explanation of the target and drug. EphrinB2 is a transmembrane protein expressed in developing arterial capillary endothelium that is minimally expressed in adults, but re-expressed in tumors and tumor blood vessels, making it a promising therapeutic target. EphB4 is also expressed in developing venous endothelium and is re-induced in tumors and tumor vessels. The interaction of EphrinB2 and EphB4 activates signaling to promote tumor progression, tumor angiogenesis, and immune response. In previously published TCGA data, EphrinB2 and EphB4 are both highly expressed in urothelial tumors and are negative prognostic markers, highlighting their potential as therapeutic targets in UC.1

sEphB4-HSA is a recombinant fusion protein composed of the full-length extracellular domain of human receptor tyrosine kinase ephrin type-B receptor 4 (sEphB4), which is fused to full-length human serum albumin (HSA).2 sEphB4-HSA functions as a decoy receptor for the membrane-bound ligand EphrinB2 and interferes with the binding of EphrinB2 to its native receptors, including EphB4. As EphrinB2 is known to recruit immune cells into the tumor microenvironment, the investigators hypothesized that sEphB4-HSA will be synergistic with PD1/PDL1 antibodies and improve anti-tumor activity.

The objective of this study was to determine the feasibility of combining sEphB4-HSA with pembrolizumab in patients with advanced UC. Eligible patients were platinum-refractory and had not received prior anti-PD1/PDL1 immunotherapy. Patients were treated with sEphB4-HSA 10 mg/kg IV every 1 week and pembrolizumab 200 mg IC every 3 weeks. Seventy patients were enrolled to ensure 60 response evaluable patients. Patients underwent CT C/A/P every 6 weeks with independent radiology review. The co-primary endpoints were tolerability and overall survival (OS). Secondary endpoints included progression-free survival (PFS), overall response rate (ORR), duration of response (DOR), and subgroup analysis of the EphrinB2-positive patients (using a cut-off of greater than or equal to 1% membrane staining).

Demographics and baseline characteristics of the 70 enrolled patients were representative of a metastatic UC population. Median age was 67. The majority had lower tract disease (80%), had visceral metastases at baseline (89%), and had received prior cisplatin-based chemotherapy (74%). Variant histology accounted for 39% of patients. The EphrinB2-positive subgroup (46/70; 66% of the overall cohort) demonstrated similar characteristics. 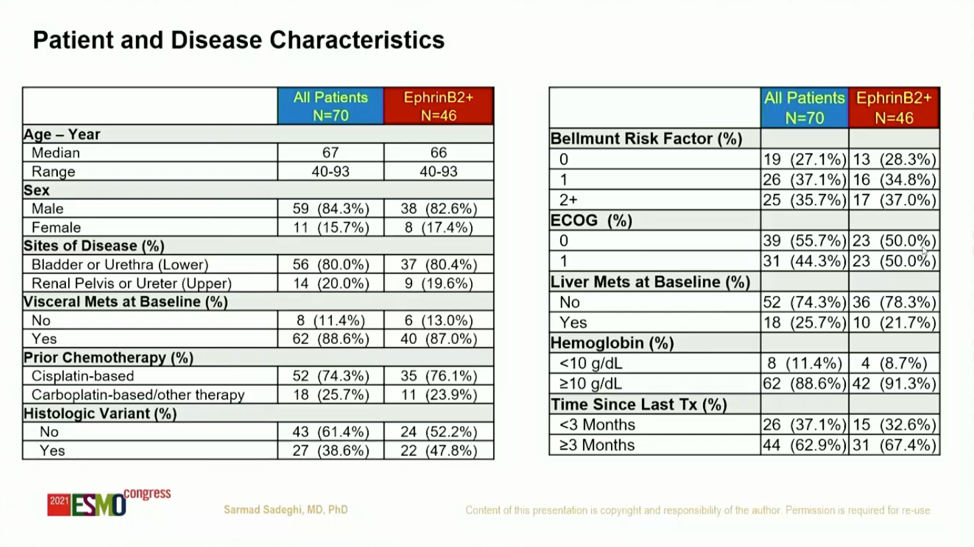 The combination of sEphB4-HSA and pembrolizumab demonstrated impressive activity. The ORR was 37% in the overall cohort with a complete response (CR) rate of 16% In the EprhinB2-positive cohort, the ORR was 52% with a CR rate of 24%. With a median follow-up of 23 months, the median DOR was not reached in the overall cohort or the EphrinB2-positive cohort. 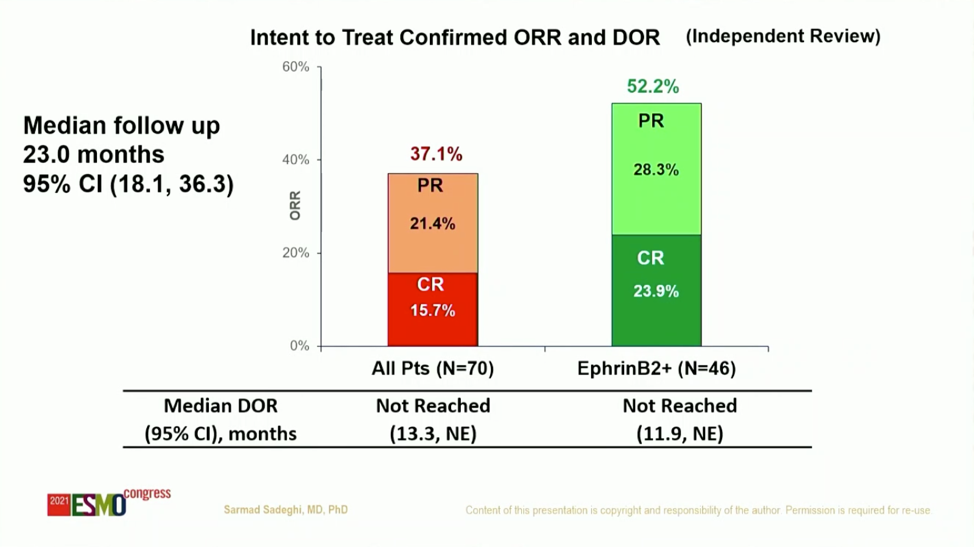 Analysis of the swimmer plot highlighted that responses occurred early into treatment – within two to four months of starting therapy for many patients – and was durable. 70% of responders maintained responses beyond 24 months. Additionally, several patients who were taken of therapy maintained durable responses. 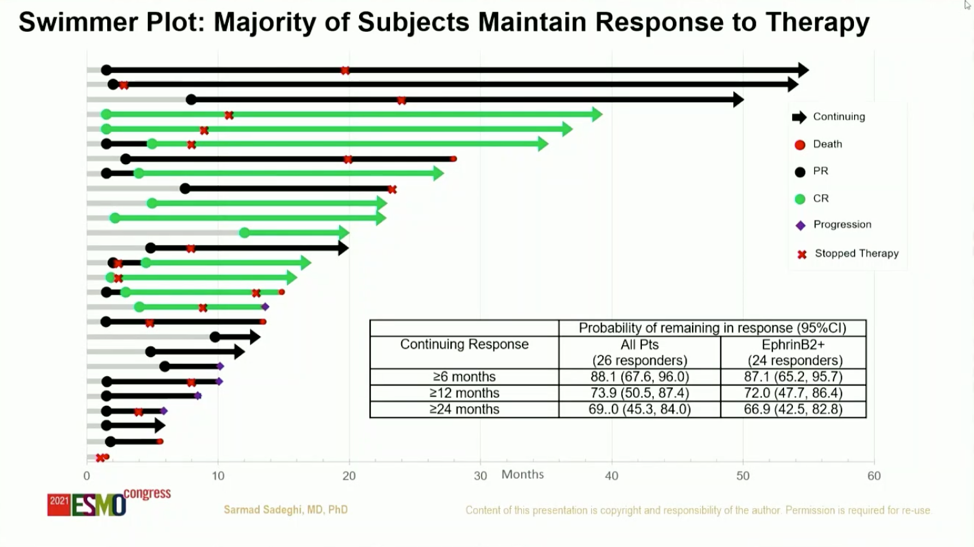 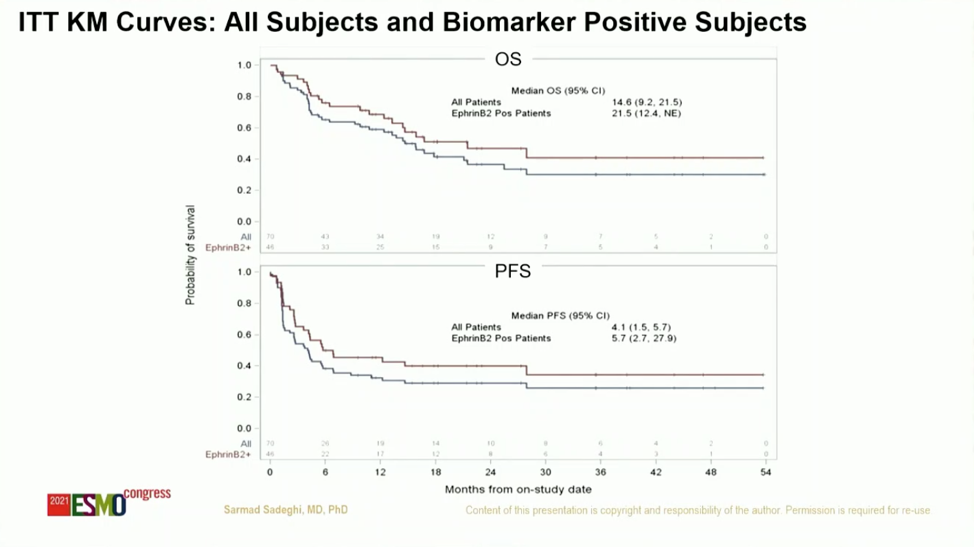 In addition to clinical activity, the combination of sEphB4-HSA and pembrolizumab demonstrated an acceptable toxicity profile. The most common adverse event was hypertension, which occurred in 74% of patients and was Grade 3 in 45% of patients. 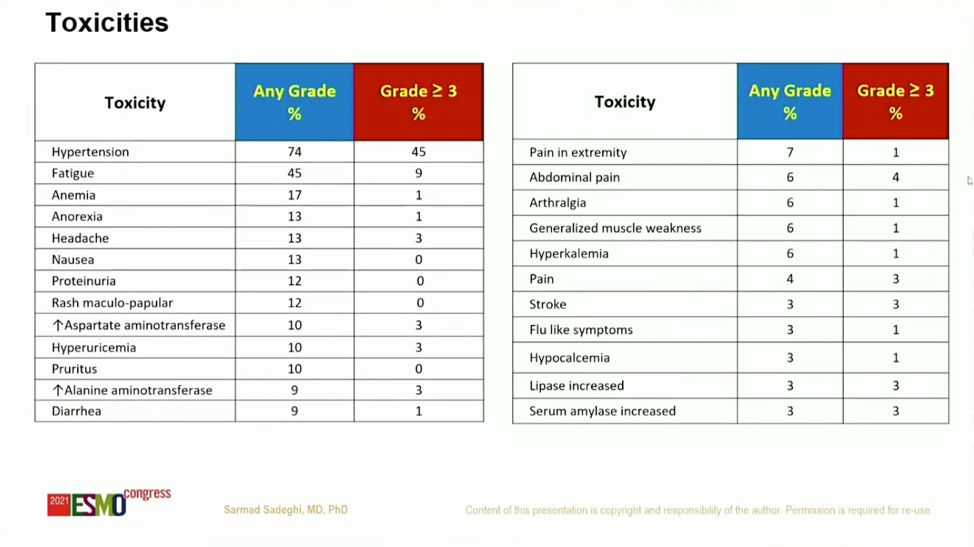 Dr. Sadeghi concluded that the combination of sEphB4-HSA and pembrolizumab demonstrated synergistic activity and was well tolerated. Clinical endpoints, including ORR, DOR, PFS, and OS were improved relative to expected performance for PD1/PDL1 monotherapy. Pre-specified subgroup analysis of EphrinB2-positive patients demonstrated greater activity in this biomarker-positive population and nominates EphrinB2 as a potential biomarker for identifying patients most likely to benefit from sEphB4-HSA-based therapy. As a result of these findings, the FDA granted breakthrough designation for sEphB4-HSA plus pembrolizumab in EphrinB2-positive UC patients on September 1st, 2021. A phase 3 trial of this combination is in development to establish the effectiveness of this regimen in a randomized controlled setting.