(UroToday.com) As a portion of the European Society for Medical Oncology (ESMO) Annual Congress, an Educational Session focused on improving outcomes in bladder cancer was held. In this context, Dr. Begona Valderrama discussed new treatments and novel approaches in advanced urothelial cancer (aUC).

She began by highlighting the current treatment landscape in aUC, emphasizing the importance of assessing whether patients are fit for cisplatin-based therapy. For those who are, survival may be maximized with the combination of cisplatin-based chemotherapy followed by immunotherapy, either as switch maintenance for those who do not have progressive disease or as second-line therapy in those who progress.

However, overall survival remains poor in this disease space with few patients living more than 2 years. Thus, there is an ongoing need for new treatment approaches. She, therefore, highlighted four approaches: combinations of chemotherapy or checkpoint inhibitors, targeted therapies, antibody-drug conjugates, and other novel approaches including cytokines, natural killer (NK) cell activators, macrophage inhibitors, etc. In terms of first-line therapy, results to date do not support the combination of chemotherapy and checkpoint inhibition. 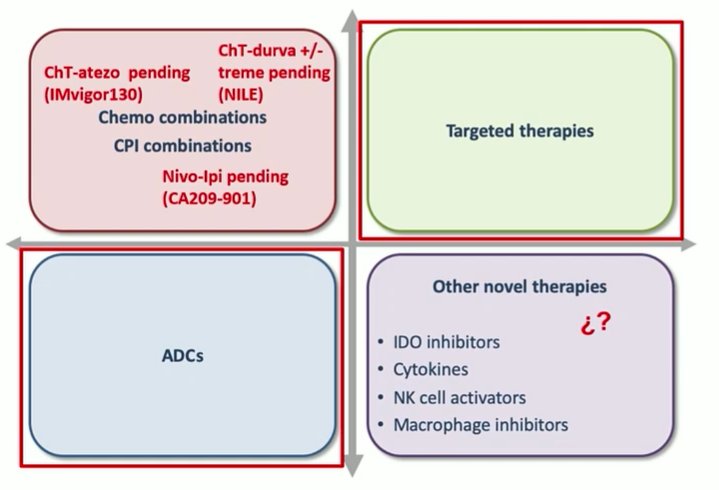 Dr. Valderrama emphasized that approximately 20% of metastatic urothelial tumors have FGFR alterations, with higher rates among those with upper tract disease. In an initial phase II trial among pre-treated patients with locally advanced or metastatic urothelial carcinoma and FGFR DNA alterations, the FGFR inhibitor erdafinitib was associated with a confirmed response rate of 45%. Notably, this was independent of previous treatment received. Indeed, among those who had received prior immunotherapy, the response rate was 59%. Median progression free survival was 5.5 months and overall survival was 11 months. Toxicity was in keeping with expected for this drug category with hyperphosphatemia, stomatitis, and skin and nail events. This approach is now FDA approved for patients who have progressed on prior platinum-containing chemotherapy and harbor relevant alterations in FGFR. However, it is unclear in the second-line setting whether these patients should receive FGFR targeting therapy with erdafitinib or immune checkpoint inhibition which is associated with a proven survival benefit. The ongoing phase III BLC3001 trial will assess this question.

Additionally, it is being assessed in the BLC2002 trial in the front-line setting either in monotherapy or in combination with the immune checkpoint inhibitor cetrelimab among patients with FGFR alterations.

Dr. Valderrama then moved to discuss antibody-drug conjugates, with a focus on enfortumab-vedotin. This agent targets the cell adhesion molecular nectin-4 which is present in nearly all urothelial cancer cells. In cohort 1 of the EV-201 trial, enfortumab-vedotin was tested in a single arm fashion among patients with prior chemotherapy exposure. This analysis demonstrated an overall response rate of 44%, with 12% of patients achieving complete response to treatment. The subsequent randomized phase III EV-301 trial compared enfortumab-vedotin to chemotherapy among patients with progressive disease following first-line platinum-based chemotherapy. This trial, published earlier this year in the New England Journal of Medicine, demonstrated an overall survival benefit (HR 0.70 and a median overall survival difference of 4 months). This effect was consistent across subgroup analyses. Progression-free survival and response rate were also improved. In terms of toxicity, rates of adverse events were similar though dose reductions were more commonly required for patients receiving enfortumab-vedotin. Notably, rates of peripheral neuropathy were higher and some of these patients had persistent toxicity. Enfortumab-vedotin is now approved for patients with aUC who previously received a checkpoint inhibitor and platinum-based chemotherapy.

Among cisplatin-ineligible patients who received first-line immunotherapy assessed in cohort 2 of the EV-201 study, treatment with enfortumab-vedotin was associated with a 51% overall response rate. While there are no randomized data in this disease space, these results warrant consideration of this treatment approach.

Dr. Valderrama then moved to discuss ongoing investigational approaches. In patients with FGFR alterations, there are a number of inhibitors being examined. However, response rates to date have been lower than erdafitinib. On the other hand, a number of other antibody-drug conjugates are currently under development targeting a variety of different targets.

Finally, she considered other immunotherapy approaches beyond checkpoint inhibitors, including a BMS inhibitor, and cytokine targeting treatments. Many of these approaches are being considered earlier in the disease space, including in neoadjuvant treatment. Finally, she considered the role of novel combination treatment approaches which she suggested would be the most promising approaches in both localized and metastatic disease. One of the most promising combinations, in her opinion, is that of enfortumab-vedotin with pembrolizumab. In a small phase II trial, the overall response rate exceeded 70% and formed the basis of an ongoing phase III trial.