(UroToday.com)  Sunitinib was standard first line treatment for metastatic clear cell renal cell carcinoma (mccRCC) for many years until multiple clinical trials showed superior efficacy of various treatment combinations including nivolumab and ipilimumab in International Metastatic RCC Database Consortium (IMDC) intermediate or poor-risk disease. Combination nivolumab and ipilimumab resulted in a 42% objective response rate and median progression-free survival of 11.6 months. Single-agent nivolumab is associated with an objective response rate of 28.7% with a median progression-free survival of 5.54 months. A recent transcriptomic analysis of primary frozen ccRCC specimens revealed 4 molecular subgroups that could be summarized by a 35 gene signature (ccrcc1-ccrcc4). Ccrcc1 (immune-low) and ccrcc4 (immune-high) were associated with the poorest outcomes to sunitinib, whereas ccrcc2 (angio-high) and ccrcc3 (normal-like) had the best outcomes. The authors of this presentation hypothesized that these expression signatures could stratify patients most likely to respond to sunitinib (ccrcc2, angio-high, and ccrcc3), nivolumab (ccrcc4,immune-high), and nivolumab and ipilimumab (ccrcc1, immune-low).

To test this hypothesis, the BIONIKK trial was implemented with the schema shown below. The number prior to the randomization arrows are the ccRCC signature. Patients with ccRCC signatures 1 and 4 were randomized between nivolumab and nivolumab + ipilimumab. Patients with ccRCC signatures 2 and 3 were randomized between tyrosine kinase inhibitor (sunitinib or pazopanib) and nivolumab + ipilimumab. The primary endpoint of this study was overall response rate using investigator-assessed RECIST criteria. Key secondary endpoints included progression ree survival (PFS), overall survival (OS), tolerability and duration of response. No statistical testing was utilized as this was designed as a non-comparative study.

Between 2017 and 2019, 308 patients across 15 centers in France were screened. 202 patients were randomized to the different arms, with 154 patients ultimately being evaluable in the target cohort (TCE). An additional 33 patients were included in an additional cohort (ACE) after IDMC review suggested continuation of the study.

Patient demographics by expression signature are shown below. Note that the number of patients with the ccrcc3 signature was quite low relative to other groups. 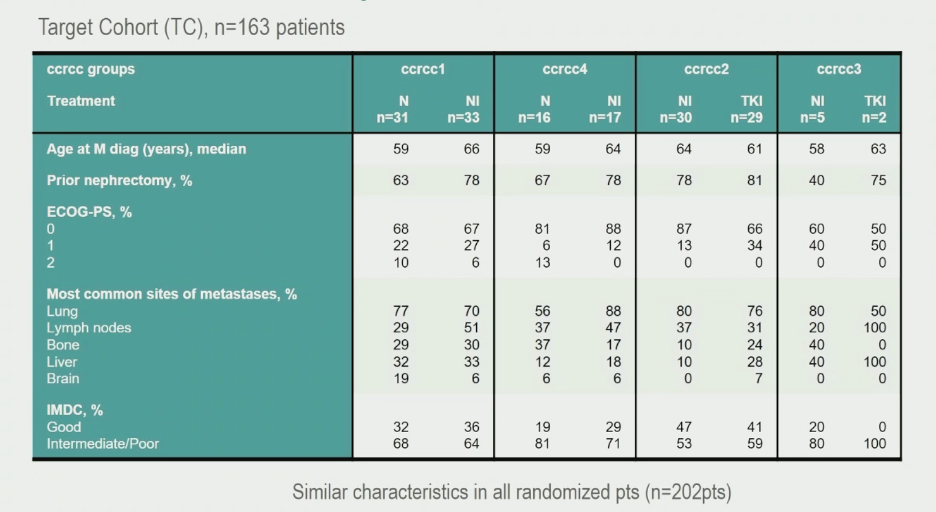 Data for the primary endpoint of objective response rate are shown below. As hypothesized, the ORR for combination nivo+ipi was numerically higher than nivolumab alone in the ccrcc1 group (immune-low). ORR was numerically comparable between nivolumab and nivo+ipi in the immune-high ccrcc4 group, representing a much higher than previously published ORR for nivolumab. ORR was also numerically similar between sunitinib and nivo + ipi in the ccrcc2 angio-high group. Numbers were small in the ccrcc3 cohort, with responses only in the nivo+ipi group. 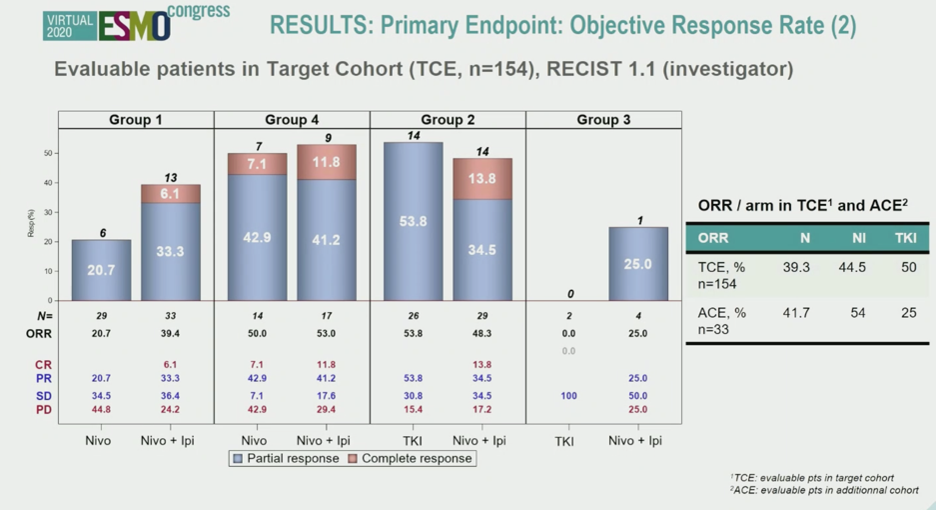 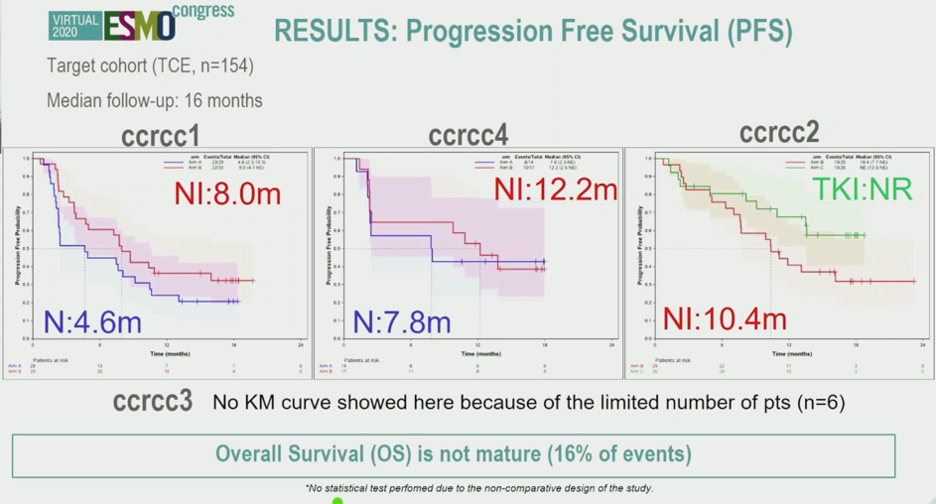 There were no new safety signals observed relative to those previously published for these therapies.

In an exploratory analysis, the immune cell populations for each patient were deconvolved using RNA expression profiles. As expected, ccrcc4 (immune-high) tumors were the most infiltrated by immune cells. Further analyses between the contents of the tumor microenvironment and outcome are ongoing. These analyses are part of an ongoing biomarker program to utilize multiple profiling platforms to understand predictors of therapy response.

Dr. Vano concluded that BIONIKK represents the first randomized clinical trial based on molecular profiling for treatment in mccRCC. The chosen tumor profiling method of RNA expression signatures enriched response rates in tumors classified as “immune-high” (ccrcc4) to nivolumab to that numerically similar with combination nivolumab and ipilimumab. As hypothesized, the “immune-low” ccrcc1 group had increased ORR with combination nivolumab and ipilimumab, and TKIs are effective in the “angio-high” patient population. This study provides evidence that prospective molecularly based clinical trials are feasible in mccRCC, hopefully paving the way for many to come.