(UroToday.com) Treatment for patients with advanced bladder cancer has had some significant advances in the past few years. For many years, platinum-based chemotherapy has been standard of care, with significantly better outcomes among those able to tolerate cisplatin-based therapy than those who are cisplatin-ineligible. Since 2016, there has been a proliferation of treatment approaches including immunotherapy and targeted therapy.

Nearly 50% of patients with advanced urothelial cancer are not candidates for cisplatin-based chemotherapy. Among those who are cisplatin-ineligible, recent data as shown that those who have greater than 1% PD-L1 expression should be offered immunotherapy-based approaches with atezolizumab or pembrolizumab instead of the standard combination of gemcitabine and carboplatin. Recent observational data have demonstrated high response rates to chemotherapy following initial immunotherapy.

In a late-breaking abstract mini-oral presentation at this year’s European Society of Medical Oncology (ESMO) 2020 Virtual Annual Meeting, Dr. Begona Perez Valderrama presented the results of the INDUCOMAIN trial assessing the combination of immunotherapy (avelumab) and chemotherapy (gemcitabine plus carboplatin) in this patient population.

This was a phase II trial enrolling patients with unresectable or metastatic advanced urothelial carcinoma who were ineligible for cisplatin-based chemotherapy and had not yet received systemic therapy.

As this was a phase II trial, the primary outcome of interest was the objective response rate with secondary outcomes of progression-free survival, overall survival, duration of response, and safety. Exploratory studies assessed predictive biomarkers for treatment response or resistance.

A total of 85 patients were randomized. As expected based on the disease space, patients were older, predominately male, and had a high proportion of renal insufficiency. Visceral metastatic disease was present in approximately two-thirds. 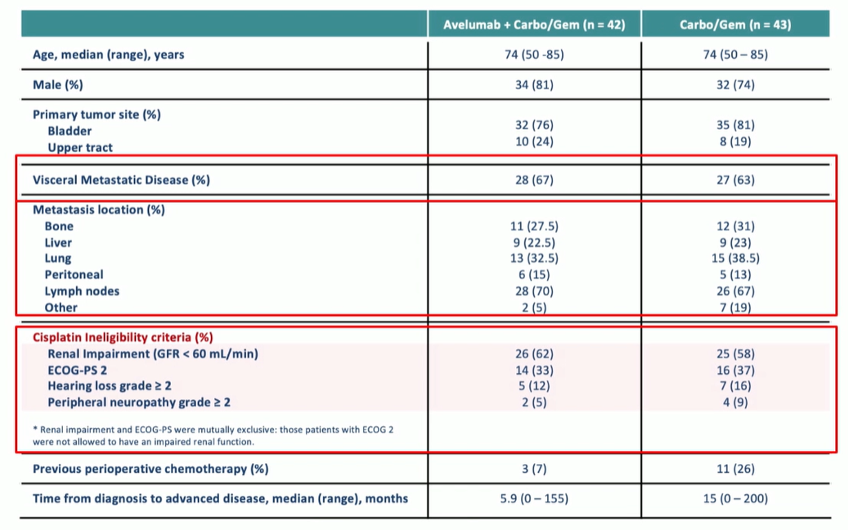 Assessing the efficacy endpoints, the authors demonstrated that, while the primary outcome of an objective response rate of 45% was met, the combination approach was not superior to standard gemcitabine and carboplatin. A number of patients had early progression with death prior to evaluation outcomes. Despite early follow-up of only 15 months median, no progression-free survival or overall survival benefit was demonstrated with the combination approach. In fact, early outcomes appeared worse among those receiving the avelumab induction instead of chemotherapy. 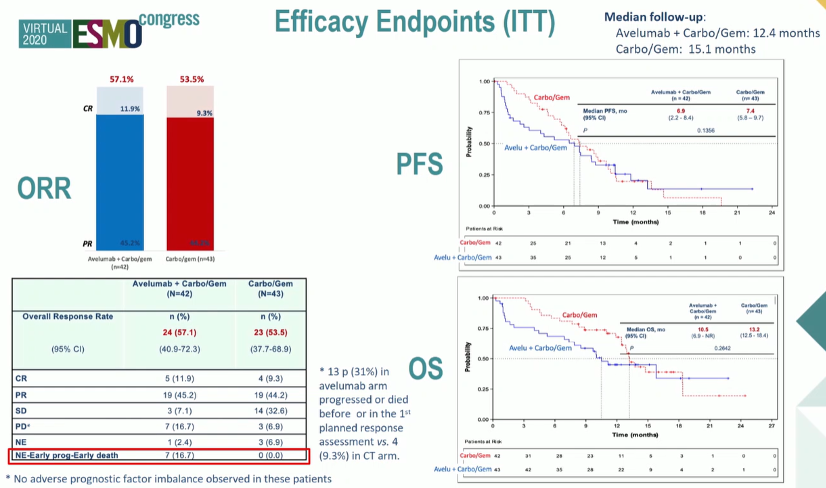 In an unplanned post-hoc analysis left censoring patients who died in the first 30 days, this early difference was mitigated and similar outcomes were seen in the two arm. In this analysis, the proportion alive at 15 months was higher among those receiving the combination therapy (51% vs 39%), though the effects of immortal time bias must be considered in this interpretation.

Toxicity outcomes were in keeping with previous use of these agents.

In conclusion, Dr. Valderrama noted that there was no observed benefit to the addition of avelumab to gemcitabine and carboplatin and there was evidence of early progression for those receiving avelumab induction.