Barcelona, Spain (UroToday.com) Interim results from APACHE have been published, with the monotherapy (durvalumab) arm stopped for futility among patients with refractory germ cell tumors1. The evidence from the durvalumab monotherapy arm were even more negative than that reported for monotherapy pembrolizumab amongst similar patients2. At the European Society of Medical Oncology (ESMO) 2019 Annual Congress, Dr. Fare and colleagues presented updated results of APACHE with the expanded combination therapy cohort.

APACHE is an open-label, randomized, three-stage, Phase II study. Patients who have failed ≥2 chemotherapy regimens received durvalumab 1.5 gr q4w, x 13 cycles (arm A) or durvalumab plus tremelimumab 75 mg q4w, x 4 cycles, followed by durvalumab alone x total 13 cycles (arm B). The primary endpoint was the modified objective response-rate (mORR = RECIST 1.1 complete or partial response or stable disease + serum tumor marker reduction >10%). The null hypothesis was that mORR rate would be ≤10%, and the test hypothesis was that mORR ≥25% (α and β = 10%). The total sample size of 120 patients was split into three stages: in stage 1, each arm was terminated whenever no response was observed in 11 patients/arm. In stage 2, 29 additional patients/arm were enrolled. Biomarker analyses included: PD-L1 expression on immune cells and comprehensive genomic profiling with the FoundationOne assay. 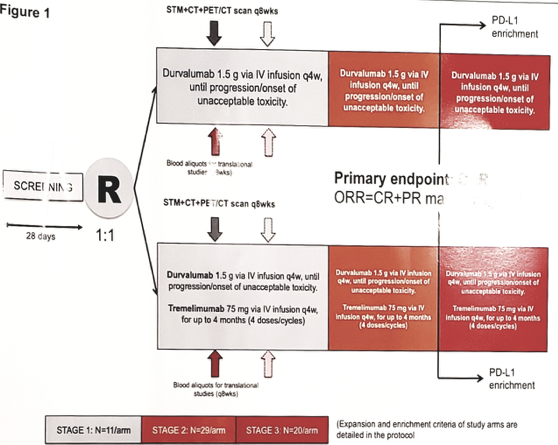 From February 2017 to November 2018, 29 patients were enrolled (11 arm A and 18 arm B). including 22 with gonadal and 7 with extragonadal germ cell turmors (GCT). There were 19 patients that received ≥3 prior chemotherapy regimens. Median tumor mutational burden was 4 mutations /mb, one patient showed microsatellite instability in arm A. There were 10 patients (34.5%) that experienced any-grade adverse events, without differences between arms. In the expanded arm B, two responses (11.1%, one RECIST-partial response in seminoma and one stable disease with serum tumor marker reduction in nonseminoma) and two stable disease were observed. Progressive disease occurred regardless of PD-L1 expression and tumor mutational burden. After a median follow-up of 16.3 months, the 12-month overall survival (OS) in arm A was 30% (95% CI 7.2-57.7) and in arm B was 29.6% (95% CI 10.2-52.2). Further chemotherapy post-progressive disease was administered in eight patients (27.6%), but was mostly ineffective (7 stable disease, 8 progressive disease).

Swimmers plot for duration of treatment: 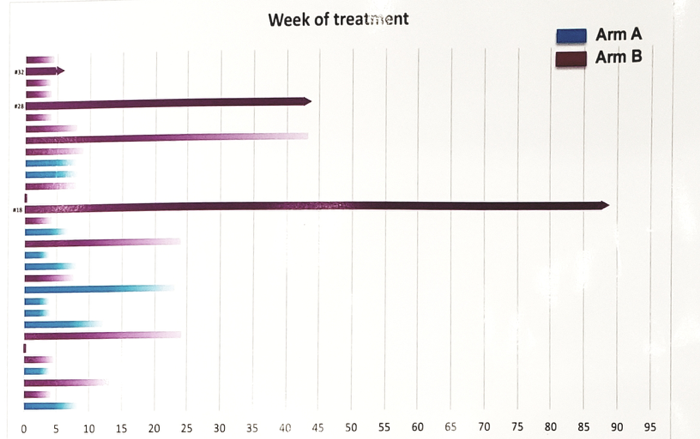 The conclusions of this updated analysis from APACHE are as follows: