Barcelona, Spain (UroToday.com) The randomized, phase 3 SPARTAN trial showed that apalutamide offered a metastasis-free survival (MFS) benefit over placebo for patients with non-metastatic (M0) castration-resistant prostate cancer (CRPC) with higher risk characteristics defined as PSA doubling time < or = 10 months prior to entry on the trial.1  This led to regulatory approval for apalutamide for this patient population with unblinding of the trial by the Independent Data Monitoring Committee (IDMC).  Overall survival was a secondary endpoint, but was not statistically significant (HR 0.70, 95% CI: 0.47-1.04; p=0.07) at the initial interim analysis, with a median of 20.3 months followup, that required 104 (24%) overall survival events.  The O’Brien-Fleming-type alpha spending function would’ve required a p-value <0.000012 at that first interim analysis to reach statistical significance.

At the 2019 European Society of Medical Oncology (ESMO) Congress, Dr. Matthew Smith presented the final MFS analysis and the second interim analysis for overall survival.  Not surprisingly, the MFS benefit was sustained.  However, this second interim analysis for overall survival with 285 (67%) overall survival events, with a median 41.0 months followup, also did not yet reach the O’Brien-Fleming boundary.  A p-value of <0.0121 would have been required.  Although a 25% reduction in the risk of death was noted with apalutamide, with HR 0.75 (95% CI, 0.59-0.96); p=0.0197, it was not able to meet the bar for statistical significance.  It is important to note that since the initial IDMC unblinding, 76 (~19%) of patients in the placebo arm have crossed over to receive apalutamide.  The 3rd and final overall survival analysis will occur ~2022 at 427 (100%) of events. 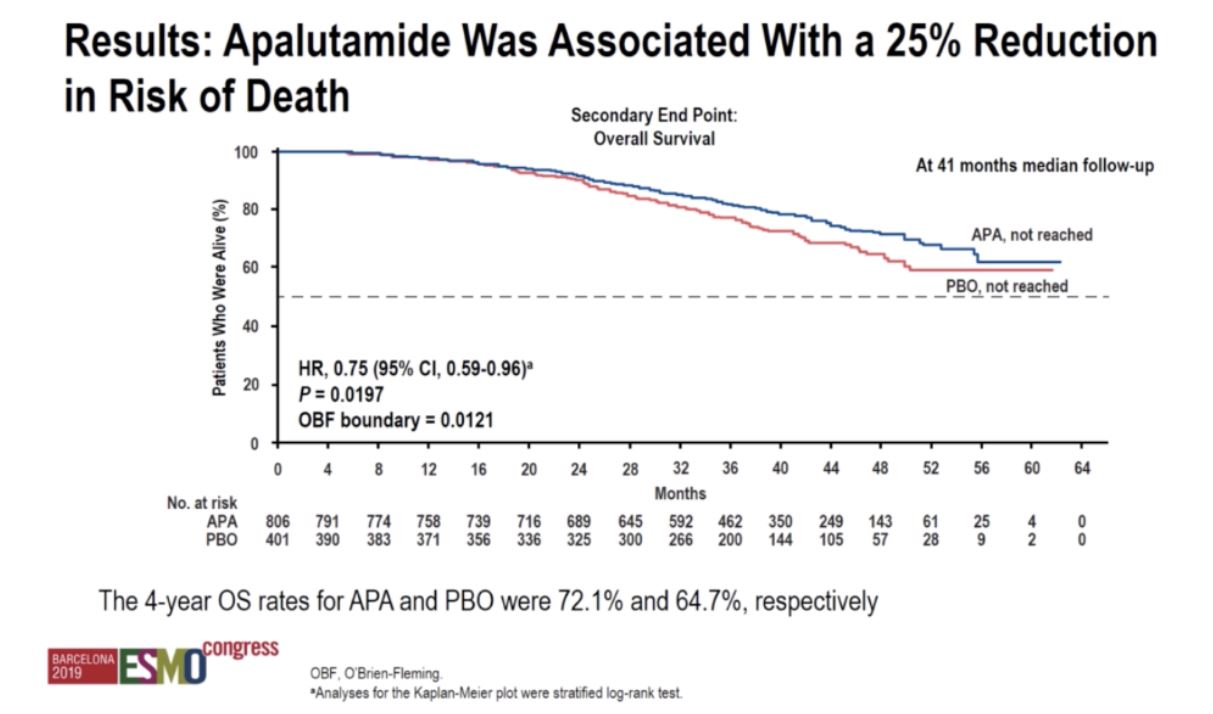 There were multiple other updates presented that were consistent with the original findings.  For instance, the forest plots showed treatment effect of apalutamide to be consistent across all evaluated subgroups, with all subgroups falling to the left of the HR 1.0, although the 95% CI almost all crossed 1.0.  Time to initiation of chemotherapy was also superior with apalutamide HR 0.60 (95% CI, 0.45-0.80); however, there has not been formal statistical testing and that will not occur unless the overall survival results become statistically significant. 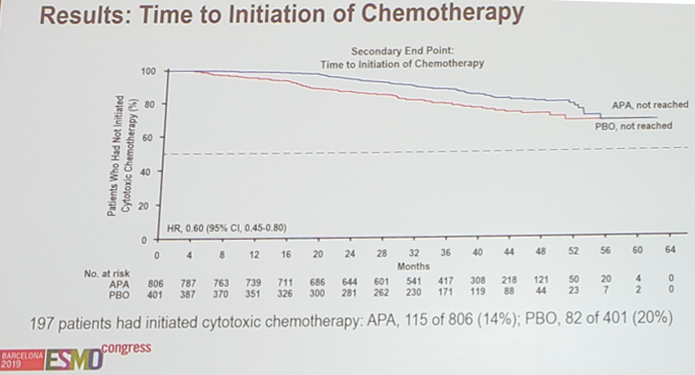 The exploratory progression-free survival 2 (PFS2) analysis, where patients were followed from randomization beyond the initial progression on either apalutamide or placebo until the second progression, confirmed a HR 0.55 (95% CI, 0.45-0.68); p <0.0001.  This second progression most commonly occurred on abiraterone acetate.  Finally, the safety profile of apalutamide remained consistent with prior reports. 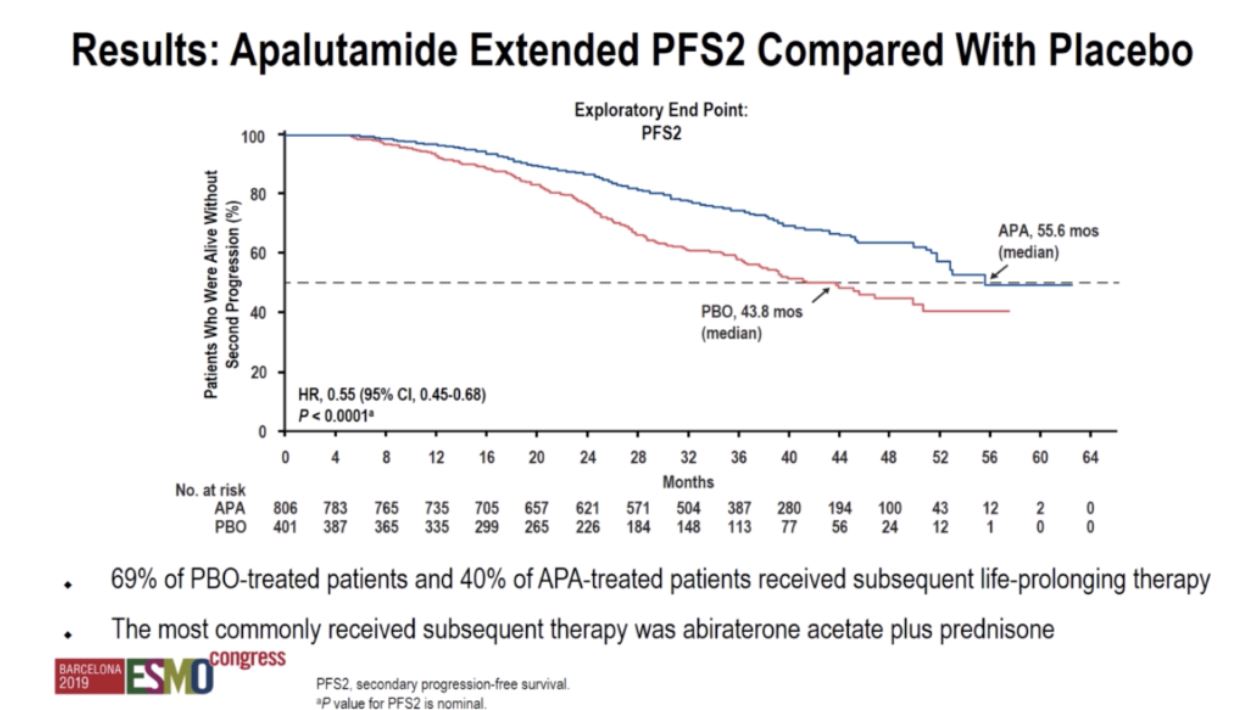 In summary, although the overall survival data is not statistically significant at this time, we need to continue to follow the patients on the trial.  Regardless of the ultimate results from the future final overall survival analysis, we need to consider that some patients in the placebo arm have crossed over to receive apalutamide, which has the potential to slightly damper the survival benefit from the therapeutic arm.  This data should not discourage us from continuing to treat patients with high risk M0 CRPC with apalutamide, given the confirmed MFS benefit from the primary endpoint analysis. 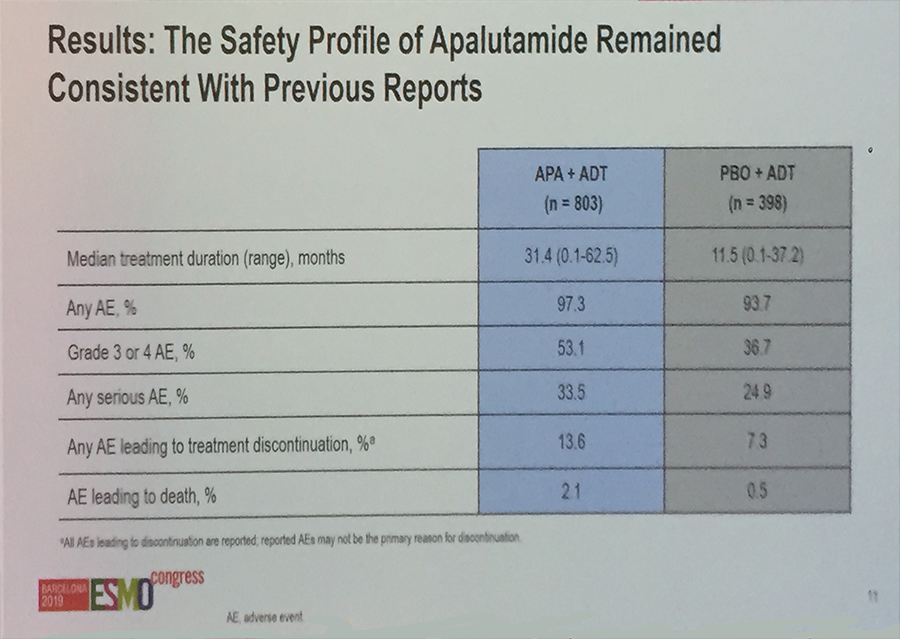