Regarding the role of chemotherapy and novel ARTTs for a patient like the one described above, Dr. Gillessen began by highlighting that there are no randomized trials for cN+ patients. Inferences about the benefit of chemotherapy and ARTT can be made, however, from analyzing node-positive subpopulations of prospective, randomized studies.

The GETUG-12 study evaluated 3 years of adjuvant ADT with or without docetaxel and estramustine following definitive local therapy in men with high-risk localized prostate cancer, including those with pathologically confirmed lymph node disease.1 The majority (87%) of patients in this study received radiation as the primary therapy. After 12 years of follow-up, the addition of docetaxel and estramustine significantly improved relapse-free survival (HR 0.71, p = 0.0109), although there was no significant improvement in metastasis-free survival, prostate cancer-specific survival, or overall survival (OS). In a subgroup analysis, pathologic node-positive patients (pN+) seemed to benefit from the addition of chemotherapy with a HR of 0.64 (0.55-0.93) for relapse-free survival. Updated results of the STAMPEDE non-metastatic cohort treated with docetaxel were presented at the ESMO Congress 2019 meeting, which demonstrated similar improvements in failure-free survival (FFS), but not OS.2

The STAMPEDE study evaluated abiraterone in patients with metastatic and non-metastatic (M0) prostate cancer. Similar to results with docetaxel described above, in the M0 cohort, the addition of two years of abiraterone significantly improved FFS (HR 0.21, 0.15-0.31), but not OS (HR 0.75, 0.48-1.18). Notably, in the M0 cohort, 384 of 915 mean were cN+. Subgroup analysis of the cN+ patients in this cohort demonstrated a clear separation of Kaplan-Meier curves among those who received androgen deprivation therapy (ADT) alone versus ADT plus abiraterone (dotted lines below). No statistical analysis was performed as this was not a pre-planned subgroup analysis. 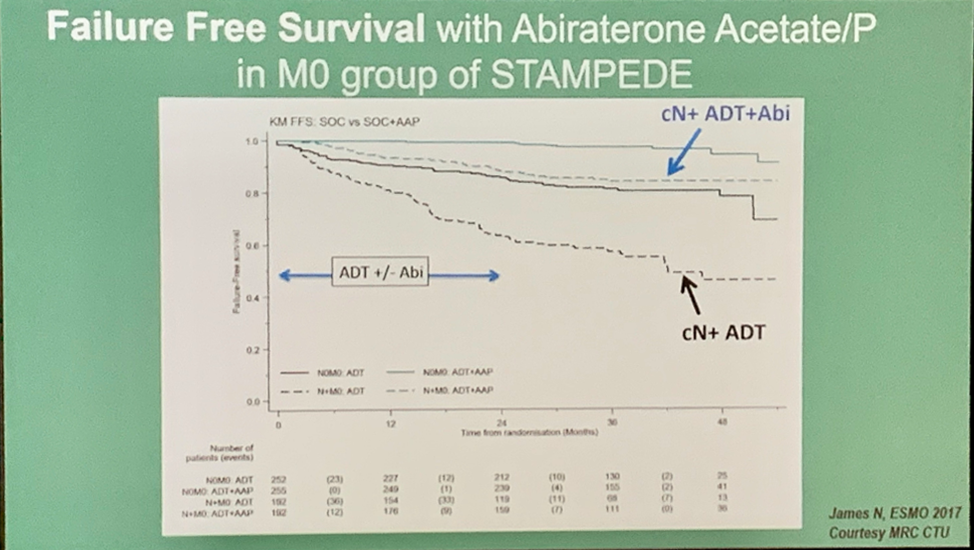 European Medicines Agency (EMA) guidelines do not address cN+ prostate cancer, however, based on the above data, the National Comprehensive Cancer Network (NCCN) guidelines list “EBRT + ADT + abiraterone and methylprednisolone” as an option for treatment of cN+ patients. Notably, EBRT + ADT is listed as the preferred treatment option. 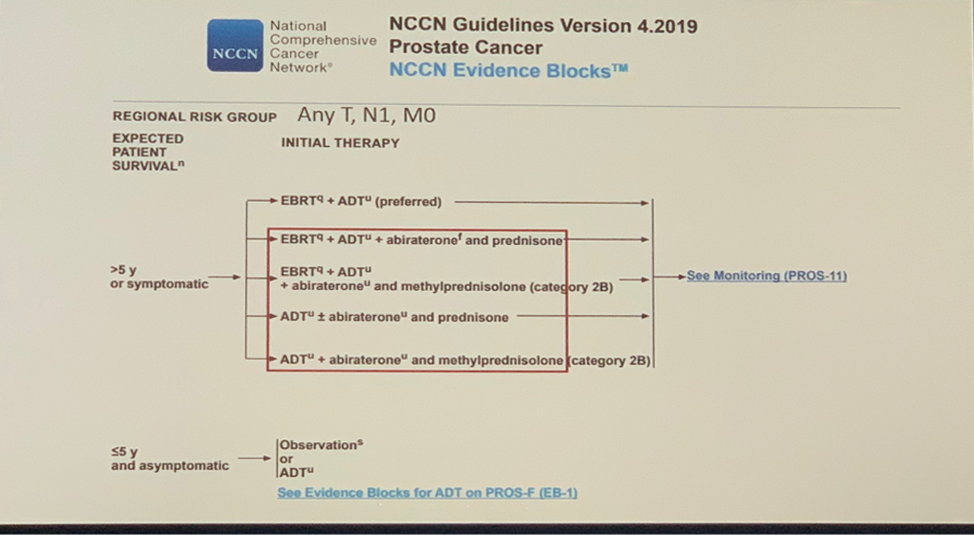 At the recent Advanced Prostate Cancer Consensus Conference, composed of an international panel of prostate cancer clinical experts, Dr. Gillessen posed the question: For patients with M0 prostate cancer with cN+ disease who are receiving radical loco-regional treatment with radiation therapy, which systemic therapy do you recommend? 52% of respondents said they would recommend ADT plus abiraterone followed by 39% recommending ADT alone. Only 2% of experts would recommend no systemic treatment. 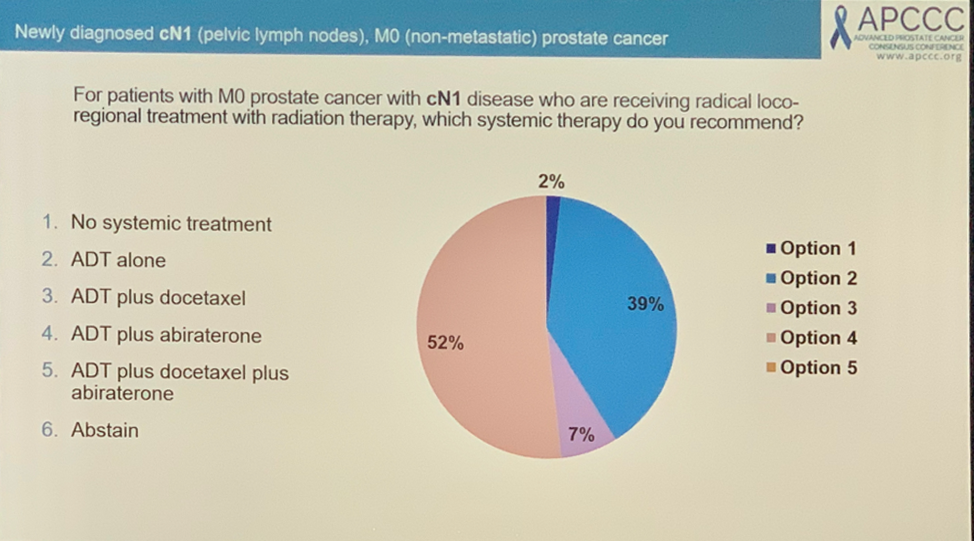 Dr. Gillessen concluded by emphasizing that systemic therapy should not be given alone to patients with cN+ disease and that the best data supports the use of radiotherapy given in combination with long-term ADT. The addition of further drugs is an emerging concept, however. Across multiple studies, docetaxel and abiraterone appear to improve failure-free survival for patients with M0 prostate cancer, but the effect does not clearly extend to overall survival, thus the addition of chemotherapy and ARTT is not recommended as part of routine care in unselected patients with non-metastatic prostate cancer, including cN+ patients. In select, young, fit patients with cN+ disease who value disease-free survival, however, Dr. Gillessen felt it could be appropriate to the data supporting docetaxel and abiraterone. Randomized, prospective clinical trials in the cN+ setting are needed to clarify the overall survival benefit of adding chemotherapy or ARTTs to definitive local therapy.