Dr. Briganti opened with a discussion of the accuracy of conventional imaging modalities for diagnosing lymph node disease, highlighting their high specificity, but significantly poorer sensitivity, especially when in the low burden oligometastatic disease population, as this patient appears to have. As a result of these test characteristics, conventional imaging may underestimate disease burden. As many as 43% of patients with a 1-2 pelvic lymph node on PET/CT will be underdiagnosed. 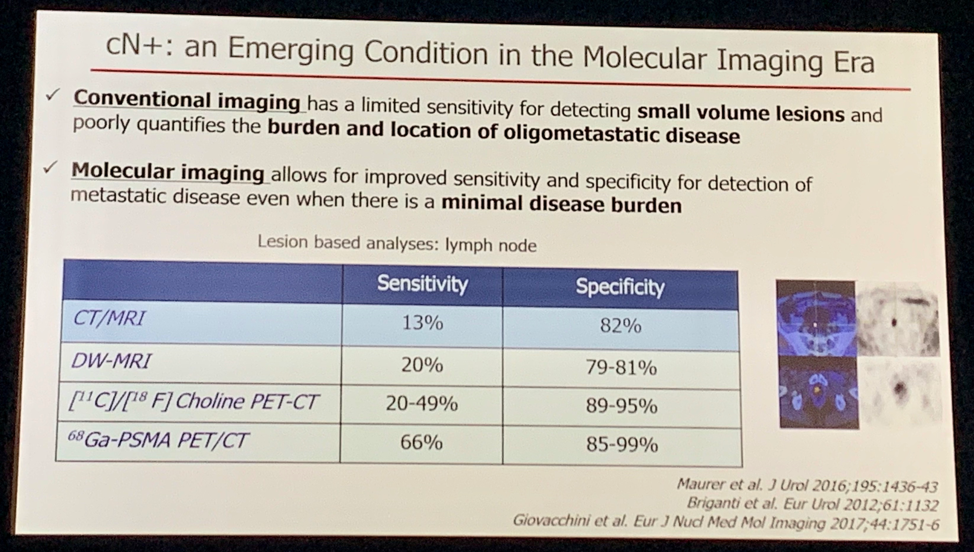 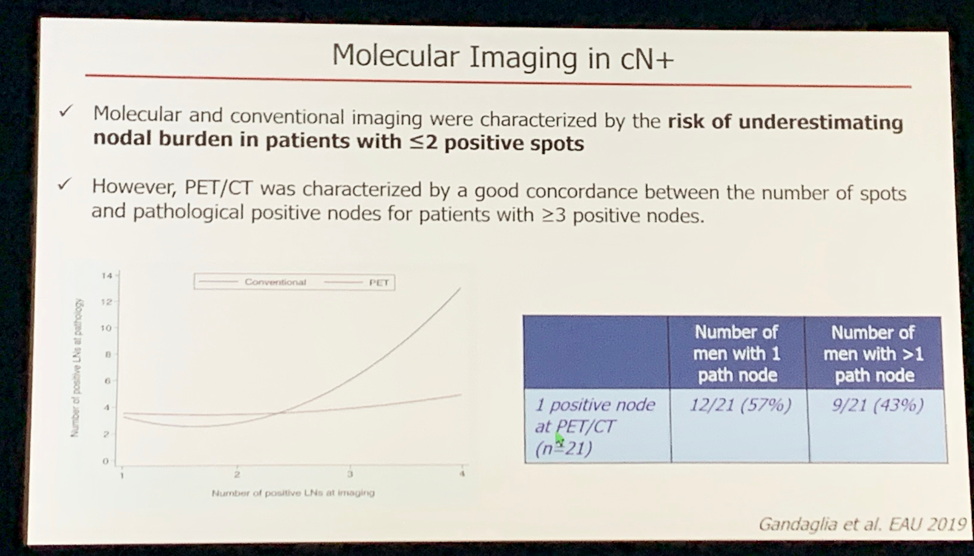 Regarding the role for surgery in patients with clinical pelvic node only disease, the European Association of Urology (EAU) states that “only limited evidence exists supporting radical prostatectomy for cN+ patients.” These results are reflected in real-world experience as only 12% of patients in the SEER database with cN+ disease underwent surgery [unpublished data]. The EAU guidelines further highlight the importance of an extended pelvic lymph node dissection if surgery is planned as definitive local therapy for patients with cN+ disease. Both of these recommends received a “strong” rating.

A systematic review of five studies evaluated the role of definitive local treatment (either surgery or radiation) in patients cN+ disease – patients only received surgery in one of these studies. The systematic review concluded that definitive local therapy was associated with better long-term outcomes.1 The one study that evaluated surgery found no significant difference in outcomes based on whether patients received surgery versus radiation as the form of definitive local therapy.2 Notably, this study was retrospective and has several limitations including patient selection bias, no standardization of imaging modality, and no data on pelvic lymph node burden.

When considering whether patients with cN+ disease are candidates for surgery, Dr. Briganti stressed a few important factors to consider. A recent study by Gandaglia, et al, found that among patients with cN+ disease treated with surgery, > 2 lymph nodes on imaging and retroperitoneal lymph node involvement were both associated with higher recurrence rates following radical prostatectomy with extended pelvic lymph node dissection.3

Dr. Briganti summarized pros and cons of surgery for patients with cN+ disease. Arguments in favor of performing surgery in this population include accurate assessment of the true extent of nodal involvement, maximizing local control in bulky disease, and facilitating a tailored treatment approach based on the pathologic report and post-operative PSA. The potential downside of surgery is that there is significant potential for surgical complications in a population where some patients will not benefit from surgery.

A benefit of surgery in the cN+ population is the prognostic information obtained from the pathology report and post-operative PSA. For example, the number of positive lymph nodes on pathologic analysis was found to be predictive of biochemical recurrence and metastasis-free survival.4 Specifically, if only one to two lymph nodes were positive, roughly 30% of patients did not recur at 10 years if no adjuvant therapy was given – the recurrence rate was significantly higher in patients with three or more positive lymph nodes. Whether to give further adjuvant therapy for pN+ patients is an open question. The EAU guidelines state that adjuvant ADT, adjuvant ADT with radiation, and expectant management (assuming PSA is < 0.1 ng/ml post-operatively) are all appropriate. Notably, evidence to support these recommendations is “weak” as there is no prospective data to guide this decision since cN+ patients have been excluded from recent prospective randomized studies evaluating adjuvant versus early salvage radiation. Retrospective data suggests that there is no significant difference in the adjuvant versus early salvage radiation strategies. 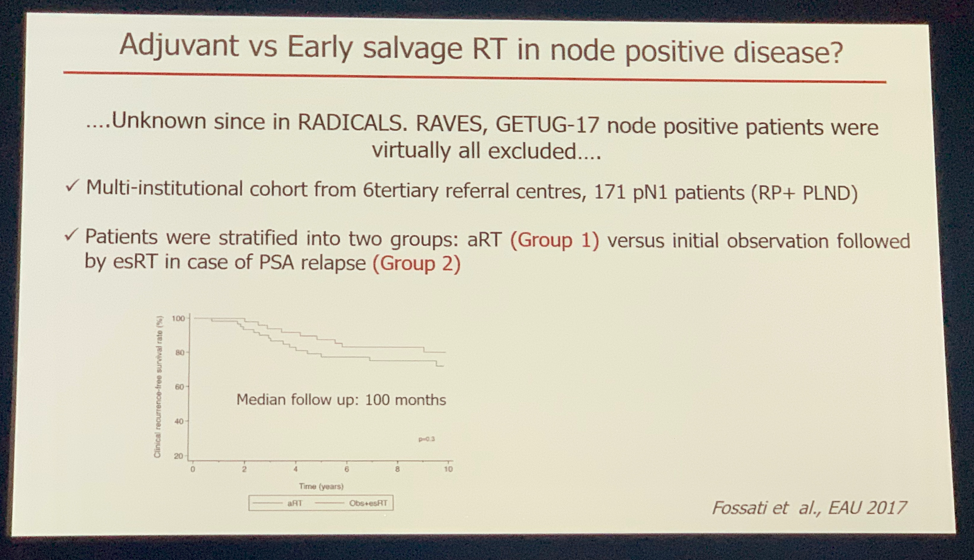 Dr. Briganti concluded that for patients with cN+ disease, regardless of the modality (surgery versus radiation), definitive local treatment is recommended given the association with improvement in overall and cancer-specific survival compared to systemic therapy alone.

Surgery seems to be a reasonable option compared to radiation, but it’s important to acknowledge that all data comparing the two approaches is retrospective. If surgery is performed, extended lymph node dissection at the time of radical prostatectomy is the gold standard for staging. A multimodal treatment approach can then be tailored to the individual patient’s profile based on the pathology report and post-operative PSA.