Dr. Meerleer began by emphasizing that for patients with cN+ disease, the goal of therapy should be cure, thus the primary tumor must be treated. He argued that if RT is selected as the modality for definitive local therapy, that it should be administered with androgen deprivation therapy (ADT). Prospective randomized studies have demonstrated that RT plus ADT is superior to RT alone and ADT alone in reducing the risk of recurrence.1,2 Historically, the rationale for the addition of ADT to RT was thought to be due to RT treating the primary disease while ADT treated micrometastatic disease. In recent years, however, data has emerged to suggest that by blocking the activity of the androgen receptor, ADT actually induces DNA damage and acts as a radiosensitizer. In contrast, there is little data to support ADT treating micrometastatic disease.

Improvements in modern RT delivery technologies have led to improved outcomes for patients receiving RT as the primary modality for non-metastatic prostate cancer. An older study by Cellini et al3 demonstrated that local recurrence usually originates in the area of the primary tumor. This observation led to the approach of given a higher dose of targeted radiation, known as a “boost”, to the primary tumor, which significantly reduces rates of biochemical recurrence, by about 10% with minimal added toxicity. Radiation boost can be delivered with either external beam RT or brachytherapy.

Dr. Meerleer stressed that when considering an RT treatment field, it is important that it include all lymph nodes that would be removed by a surgeon during an extended pelvic lymph node dissection. This would not have been possible with older technologies, but modern mapping technologies allow for delivery of RT to the necessary lymph node fields. 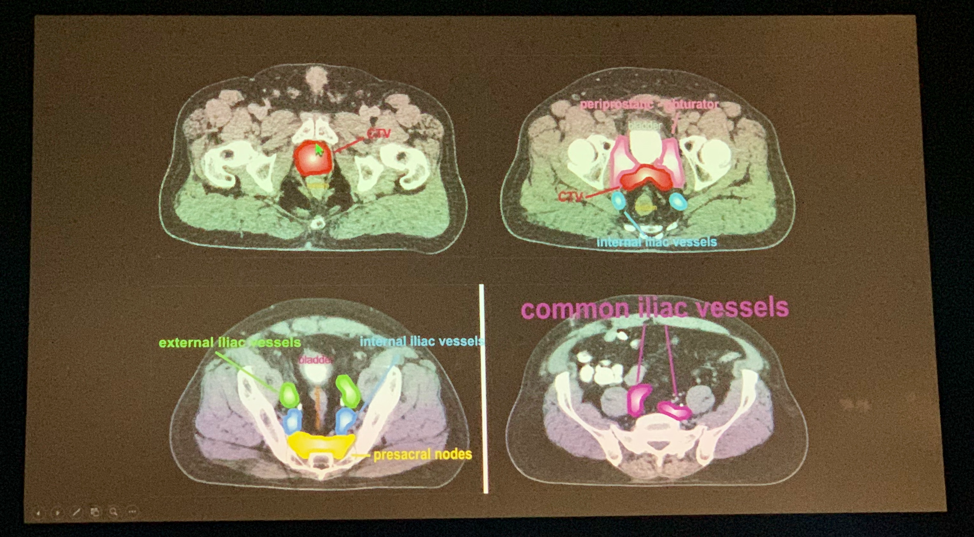 Dr. Meerleer concluded that when treating patients with pelvic lymph node positive prostate cancer, treating the primary is key, and advocated for multimodality therapy with radiation and long-term ADT (18-36 months).

Presented by: Gert De Meerleer, MD, Ph.D., Radiation Oncologist and Head of Clinics for the Department of Radiotherapy and Experimental Cancer Research at Universitair Ziekenhuis Leuven