Barcelona, Spain (UroToday.com) Despite significant progress in systematic therapy, metastatic castration-resistant prostate cancer (mCRPC) continues to be a lethal disease. mCRPC is molecularly heterogeneous, as up to 30% of mCRPC harbor deleterious alterations in DNA damage repair genes, including those with direct and indirect roles in homologous recombination repair. These loss-of-function alterations in homologous recombination repair genes are associated with response to PARP inhibition, of which BRCA1, BRCA2, and ATM are the most well characterized.

Furthermore, anti-tumor activity has been reported with the PARP inhibitor olaparib in patients with prostate cancer harboring homologous recombination repair alterations. PROfound was a randomized, open-label, phase III trial evaluating efficacy and safety of olaparib vs enzalutamide or abiraterone in patients with mCRPC with alterations in any of 15 predefined genes with a direct or indirect role in homologous recombination repair whose disease had progressed on prior new hormonal agent therapy. At the Presidential session at ESMO 2019, Maha Hussain, MD, and colleagues presented the initial results of PROfound. 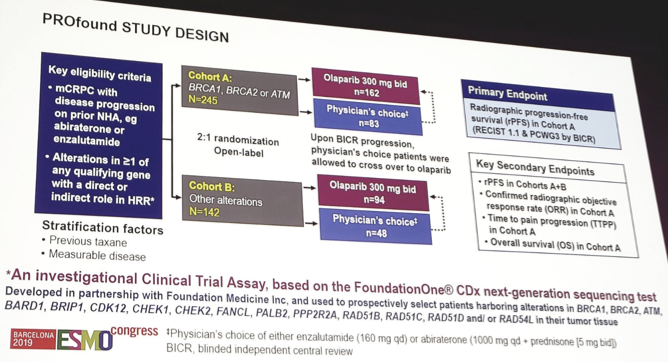 The target sample size was 240 subjects for Cohort A, with a target hazard ratio of 0.53 with 95% power and 2-sided 5% alpha (143 events). A hierarchical testing design was instituted whereby if the primary endpoint demonstrated statistical significance, the key secondary endpoints were tested sequentially. Patients were randomized between April 2017 and November 2018, with a data cutoff of June 4, 2019.

There were 4,425 men screened for PROfound, leading to 245 randomized to Cohort A, and 142 to Cohort B (of which 65.6% had prior taxane chemotherapy). The median treatment duration was 7.4 months for olaparib and 3.9 months for enzalutamide/abiraterone. Olaparib was associated with improved rPFS compared to enzalutamide/abiraterone among patients in Cohort A (HR 0.34, 95% CI 0.25-0.47), which was consistent across the majority of subgroups assessed. 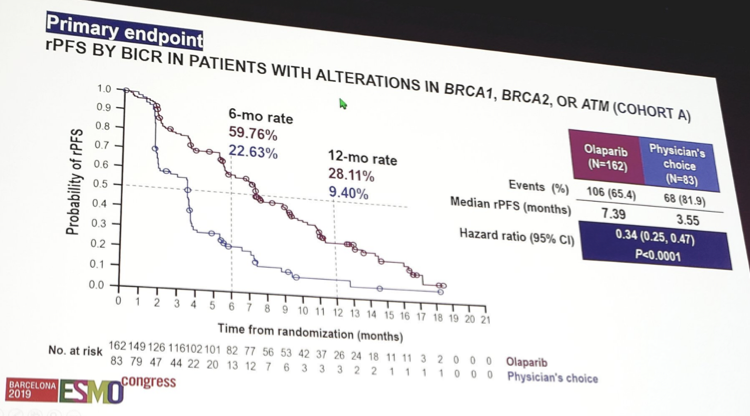 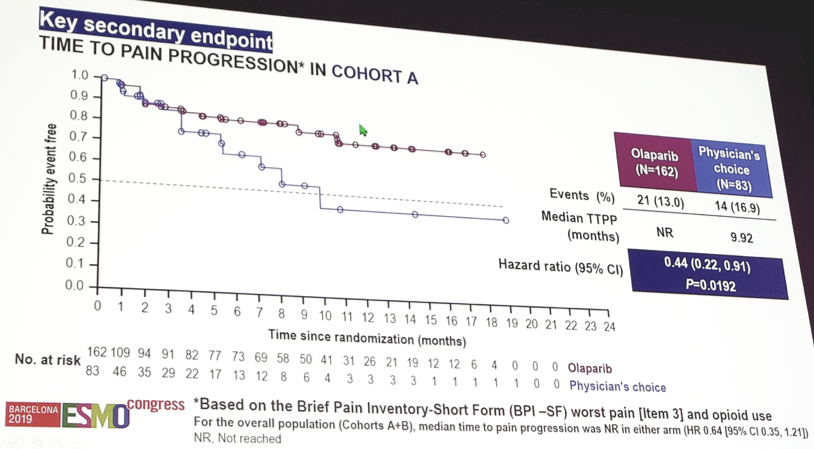 In an exploratory analysis of gene-by-gene rPFS, 7/15 genes had alteration frequencies too low for descriptive statistics, however 97% of patients were randomized based on alterations in 8/15 single genes. Of note, there is evidence of clinical activity of olaparib in patients with alterations in genes other than BRCA1 and BRCA2.  However, gene-level analysis is complex and exploratory, and comparisons may be confounded by multiple factors.

18. The Institute of Cancer Research and Royal Marsden, London, UK