Barcelona, Spain (UroToday.com) Professor Nicholas James presented results from the STAMPEDE trial for the addition of docetaxel to first-line hormonal therapy for patients with metastatic (M1) hormone-naïve prostate cancer (mHNPC). In 2015, the CHAARTED study demonstrated that adding docetaxel to standard of care androgen deprivation therapy (ADT) in men initiating treatment for mHNPC prolongs survival for those with high-volume disease, whereas survival was not improved for those low-volume disease.1 High-volume disease was defined in the CHAARTED study as the presence of visceral metastases or ≥4 bone lesions with ≥1 beyond the vertebral bodies and pelvis. Controversy exists over the evidence for benefit in low metastatic burden patients. The objective of this study was to evaluate whether there is a volume effect in docetaxel response in the first-line treatment setting among men with mHNPC in the STAMPEDE trial.

Inclusion criteria for this exploratory analysis included men with newly diagnosed mHNPC (N=1086) randomized between October 2005 and March 2013 in a 2:1 ratio to ADT (Arm A) or ADT + docetaxel (Arm C). Retrospectively-collected imaging data, blinded to trial arm, was used to categorize patients as having high-volume or low-volume disease by CHAARTED criteria. The percent of patients with high-volume (33% vs 34%) and low-volume (44% vs 41%) metastatic burden were well-balanced between men who received ADT alone vs ADT + docetaxel. 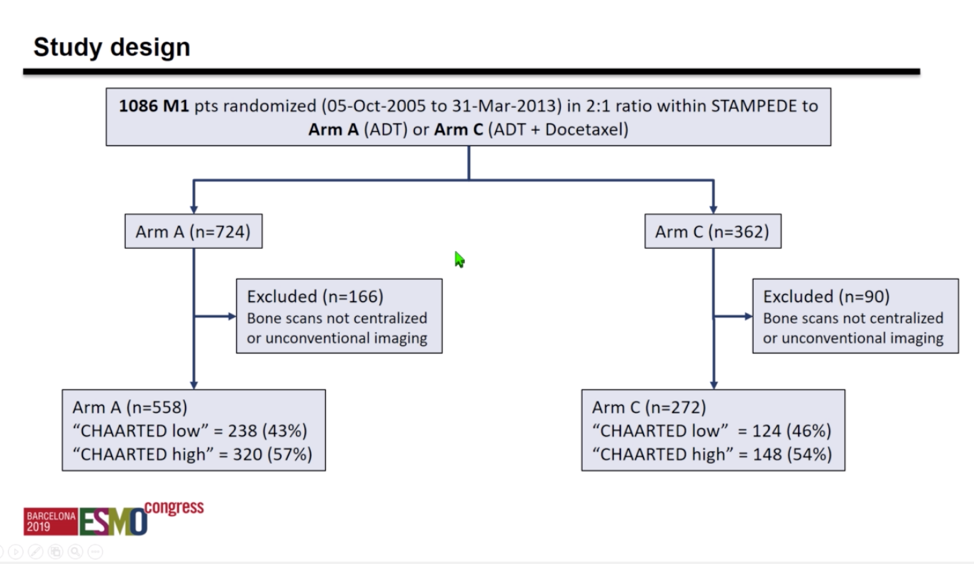 The first outcome evaluated was failure-free survival (FFS), a composite end-point including prostate specific antigen (PSA) progression, local and distant progression, and death from prostate cancer. In the overall cohort, the addition of docetaxel was associated with a significant improvement in FFS (HR 0.66, p < 0.001); 80% of treatment failures at this time were due to PSA progression. Patients treated with ADT + docetaxel also had significantly improved 5-year overall survival (OS) of 49% compared to 37% in men treated with ADT alone (HR 0.81, p = 0.009). 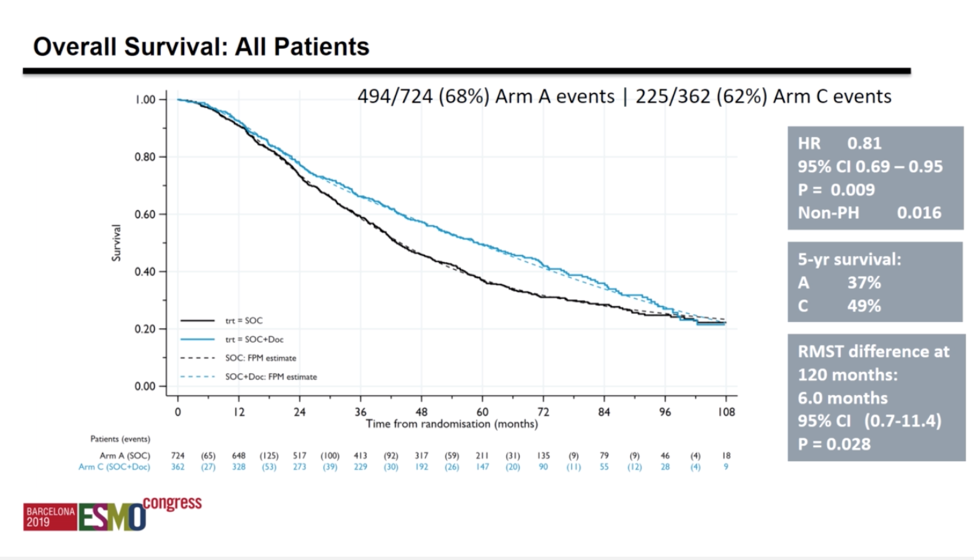 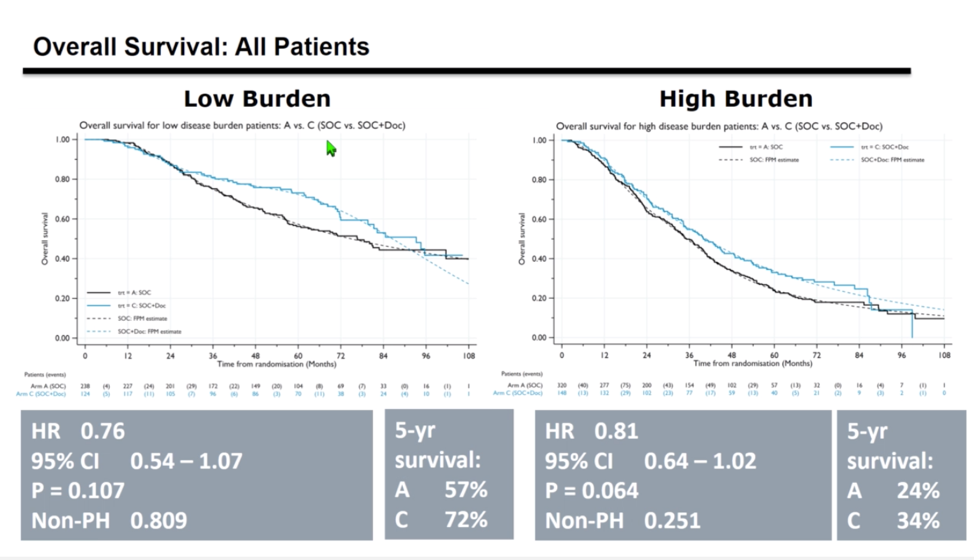 There was no evidence that the beneficial effect of docetaxel on OS varies by metastatic burden (interaction p-value = 0.827). 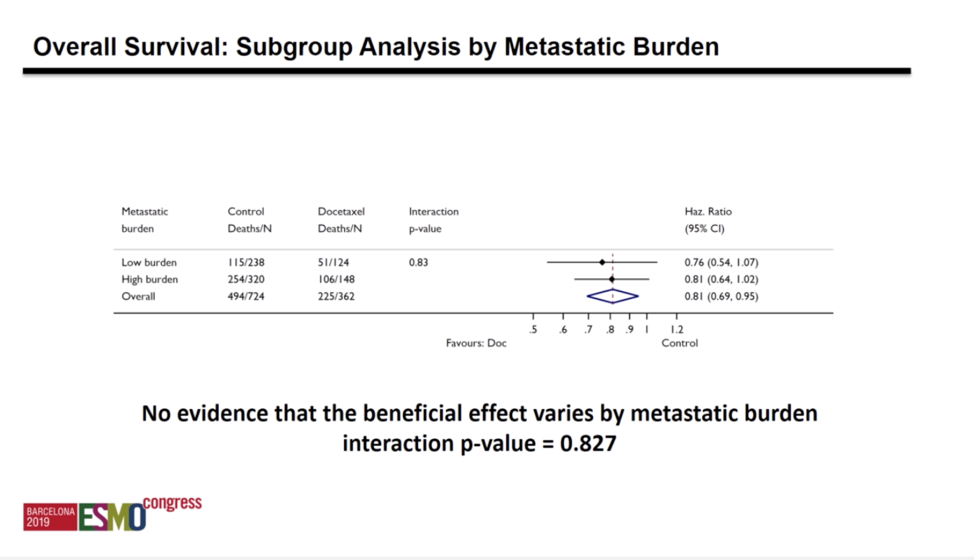 Similarly, no significant differences were observed between patients with high-volume and low-volume disease when evaluating FFS, progression-free survival, and prostate cancer-specific survival. Although the addition of docetaxel to ADT was associated with an increase in serious adverse events in the first 12 months after treatment, no excess toxicity was observed after one year, highlighting the long-term tolerability of chemotherapy in the first-line setting.

In light of the contradictory findings of this newly-presented STAMPEDE data compared to the CHAARTED and GETUG-15,1,2 Dr. James posited that differences in patient characteristics may explain the conflicting results. Less than 10% of men in the low-volume cohort of the STAMPEDE had relapsed after receiving prior local therapy; this is in contrast to the CHAARTED and GETUG-15 studies where more than 55% of men with low-volume disease received prior therapy.1,2 Published data suggests that patients with low-volume relapsed disease after prior local therapy have better long-term survival, and are less likely to benefit from the addition of docetaxel, than patients with high-volume disease and/or de novo mHNPC.3 Dr. James thus hypothesized that differences in rates of patients with relapsed disease after prior local therapy in the low-volume mHNPC cohorts may account for the observed differences in outcomes between the studies.

In conclusion, the addition of docetaxel to ADT in men with newly diagnosed mHNPC improved overall survival (OS) and FFS regardless of metastatic burden in this unplanned analysis of the STAMPEDE cohort. Dr. James concluded that docetaxel + ADT should be considered as a standard first-line option alongside AR targeting agents for all de novo mHNPC patients regardless of stratification for disease burden.