Dr. Fizazi highlighted that apalutamide was associated with a 25% reduction in risk of death compared to placebo among non-metastatic castration-resistant prostate cancer (nmCRPC) patients in SPARTAN.1 But, it is important to note that the p-value of 0.0197 was above the pre-specified p-value for significance of 0.0121, so these results are encouraging, but not statistically significant. He notes that it is also encouraging that apalutamide extended time to second radiographic progression (PFS2) when compared to placebo (55.6 months vs. 43.8 months, HR 0.55, 95% CI 0.45-0.68).

According to Dr. Fizazi, there are several unanswered questions from SPARTAN:

Dr. Fizazi remarked that there are two main messages he takes from the updated STAMPEDE data for docetaxel: (i) updated OS data shows a <20% reduction in risk of death for patients treated with docetaxel, and (ii) the effect is similar by burden of disease. Dr. Fizazi then presented a table he made listing recent phase III trials in M1 castration sensitive prostate cancer in chronological order (red – HR for OS ~0.80; blue – HR for OS ~0.67): 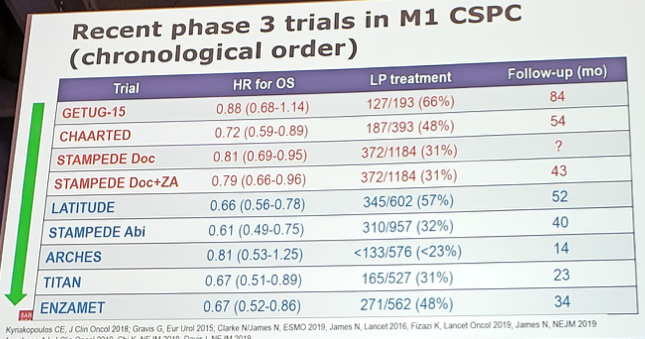 He notes that when looking at this table, the “red” trials are docetaxel based, whereas the “blue” trials are AR targeted therapy based. When rearranging the trials, sorting from best to worst hazard ratio (HR) for OS, it is clear that the AR targeted trials outperform the docetaxel trials, with the exception of ARCHES (HR 0.81, 95% CI 0.53-1.25). Dr. Fizazi stated that this premonition for chemotherapy reminds him of metastatic HR+ breast cancer, where the guidelines recommended endocrine therapy as the preferred initial option, even in the presence of visceral metastases; it took nearly 20 years for clinicians to move away from chemotherapy in these breast cancer patients.

Dr. Fizazi’s conclusions for M0 CRPC are that whether OS is improved by early intensification remains to be formally demonstrated, however he acknowledges that this SPARTAN analysis suggests that this may very well be the case. He concludes for M1 castration-sensitive prostate cancer that docetaxel reduces risk of death by <20% (based on this STAMPEDE analysis and other trials), but that AR axis-targeted drugs reduce risk of death by ~35%. Furthermore, access to treatments beyond progression does not seem to explain this difference in OS benefit. Additionally, for M1 de novo castration-sensitive prostate cancer, there is no real reason to believe that low and high burden of disease are biologically distinct: as Dr. James presented, docetaxel works (not that well) with HRs of 0.76 (low volume) and 0.81 (high volume). In his opinion, for M1 castration-sensitive disease, besides access to cost (and a few very specific situations, such as hard to treat hypertension), Dr. Fizazi does not see any good reason to choose docetaxel over androgen receptor targeting. But, to conclude, he notes that he would be happy to revise his opinion if ongoing trials eventually show that triplet therapy is better than doublet therapy.