Barcelona, Spain (UroToday.com) The sarcomatoid variant is an uncommon but highly aggressive histology of renal cell carcinoma which tends to exhibit worse outcomes relative to more common histologies like clear cell RCC with respect to VEGF targeted therapy. However, sarcomatoid renal cell carcinoma is also characterized by higher lymphocytic infiltration and PD-L1 expression relative to other histologies, which may lend it more responsive to checkpoint blockade immunotherapy.1 Furthermore, a recently published post-hoc analysis of CheckMate-214 demonstrated that patients with sarcomatoid RCC exhibited a statistically significantly higher objective response rate, progression-free survival, and overall survival with ipilimumab plus nivolumab immunotherapy versus sunitinib.2 Javelin Renal 101 was a randomized phase III trial of first-line axitinib plus the PD-L1 antibody avelumab versus sunitinib for metastatic renal cell carcinoma. On the basis of Javelin, the US FDA granted approval to axitinib plus avelumab in this setting, but data specific to sarcomatoid histology are lacking. Dr. Choueiri presented a post-hoc analysis of the Javelin Renal 101 cohort with sarcomatoid histology to characterize the response to combination immunotherapy and anti-angiogenic therapy and to identify predictive biomarkers.

As has been previously reported, Javelin Renal 101 was a randomized phase III trial of 886 patients with a primary endpoint of progression-free survival. In the present analysis, investigators report the clinical outcome data at the time of the first Javelin Renal 101 data cutoff for patients with sarcomatoid histology. With respect to biomarker analysis, CD8 and PD-L1 expression were assessed by immunohistochemistry. 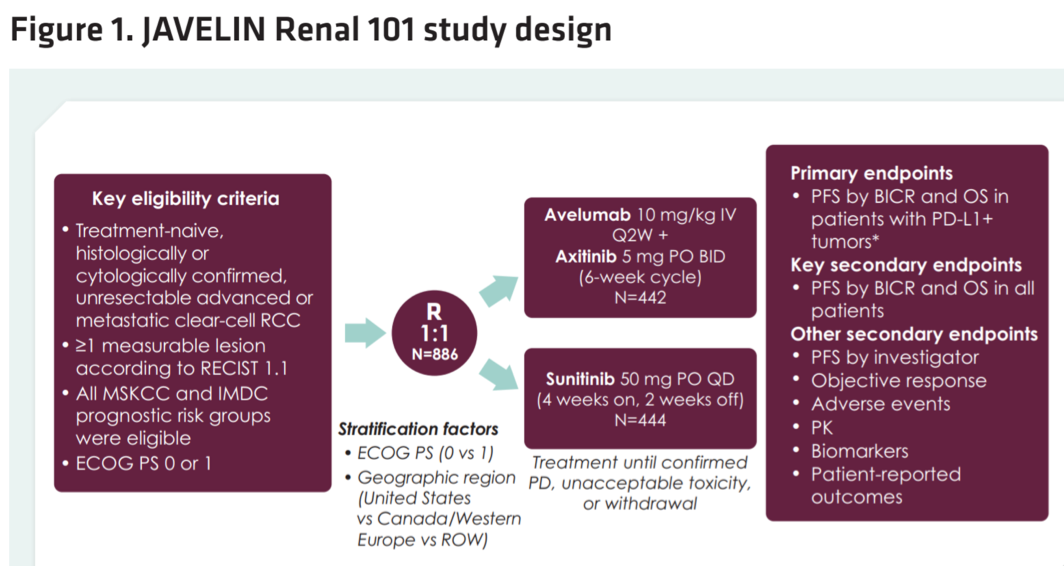 A total of 108 patients with sarcomatoid RCC were identified – 47 patients received avelumab plus axitinib, and 61 patients received sunitinib. The two arms were moderately well-balanced with respect to the sarcomatoid RCC patients with median ages of approximately 60 and male predominance of approximately 80%. Risk groups were also evenly distributed between the arms, including both the IMDC and MSKCC risk groups, as was ECOG performance status. Interestingly, the sunitinib arm exhibited a slightly higher rate of PD-L1 positivity at 85.2% compared to 72.3% in the avelumab plus axitinib arm. 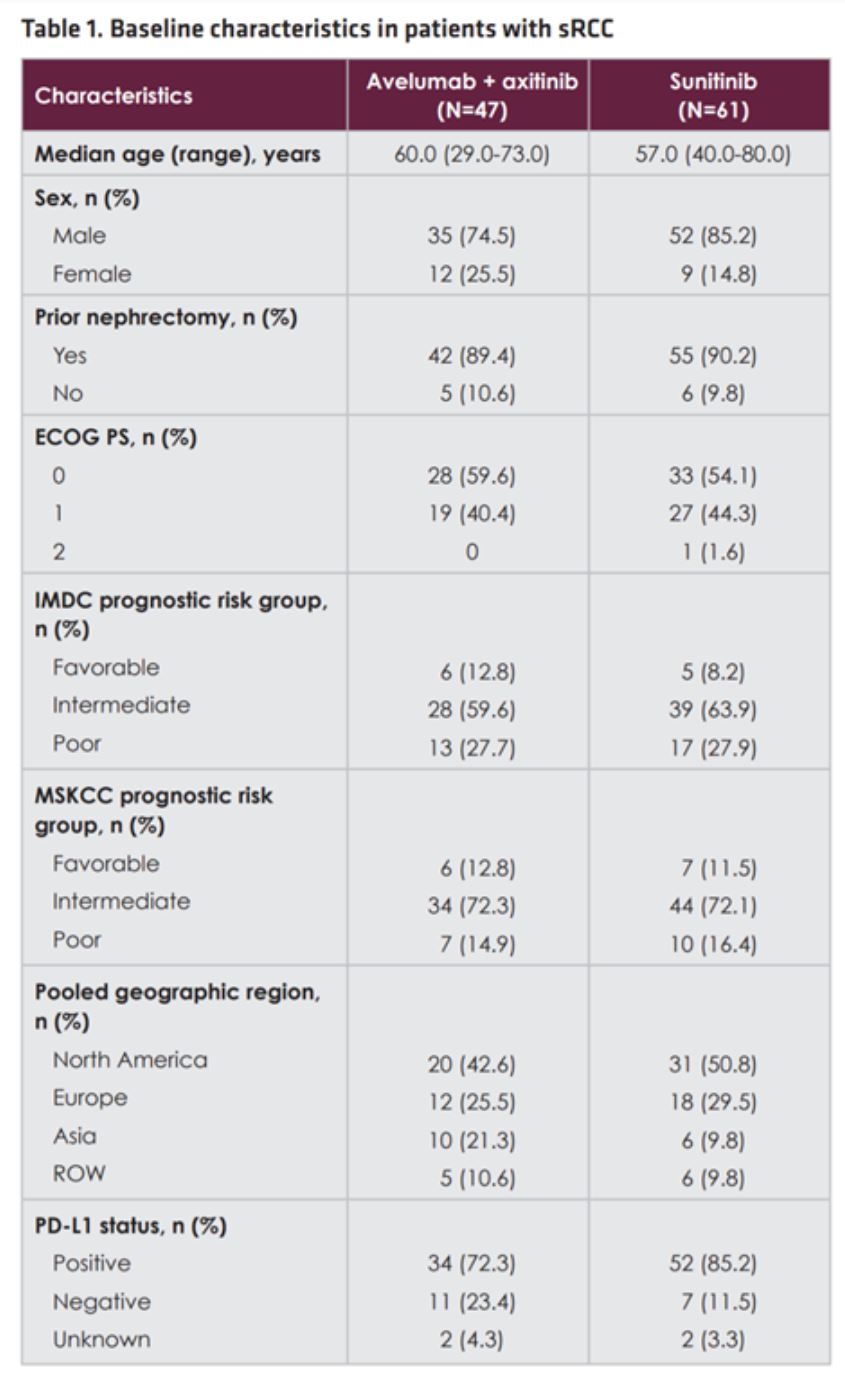 Despite lower prevalence of PD-L1 positivity, the avelumab plus axitinib arm achieved a statistically significant improvement in objective response rate relative to sunitinib – 46.8% relative to 21.3%, and 2 sarcomatoid RCC patients had a complete response to the combination. 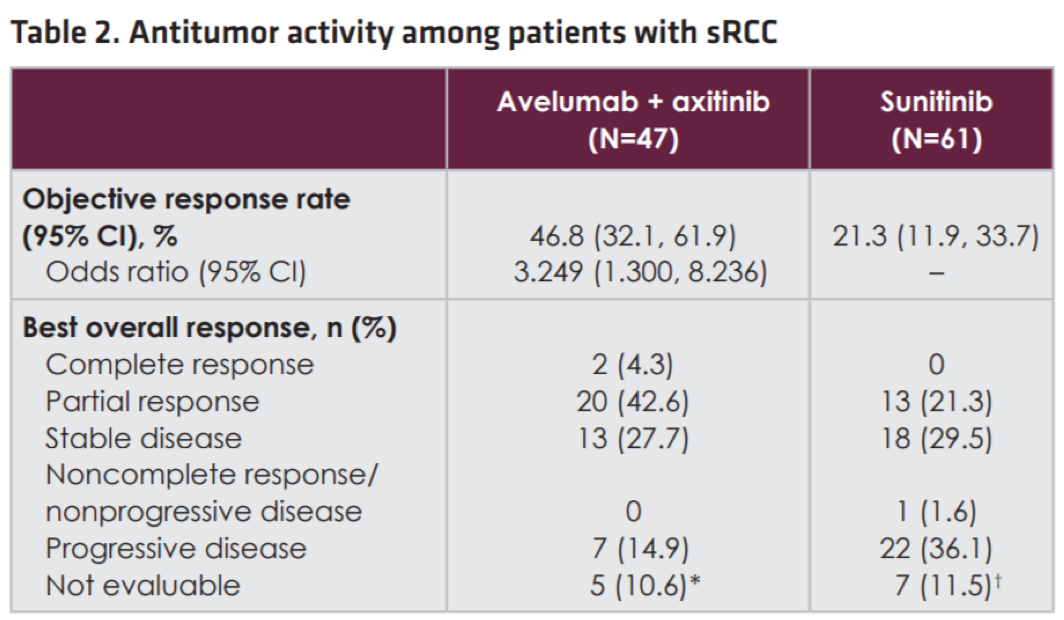 Furthermore, among sarcomatoid RCC patients, avelumab plus axitinib achieved a clinically significant 3.0-month improvement in progression-free survival (HR 0.57, 95 CI 0.325 – 1.003), though this study was not powered to detect survival differences specifically among sarcomatoid patients. 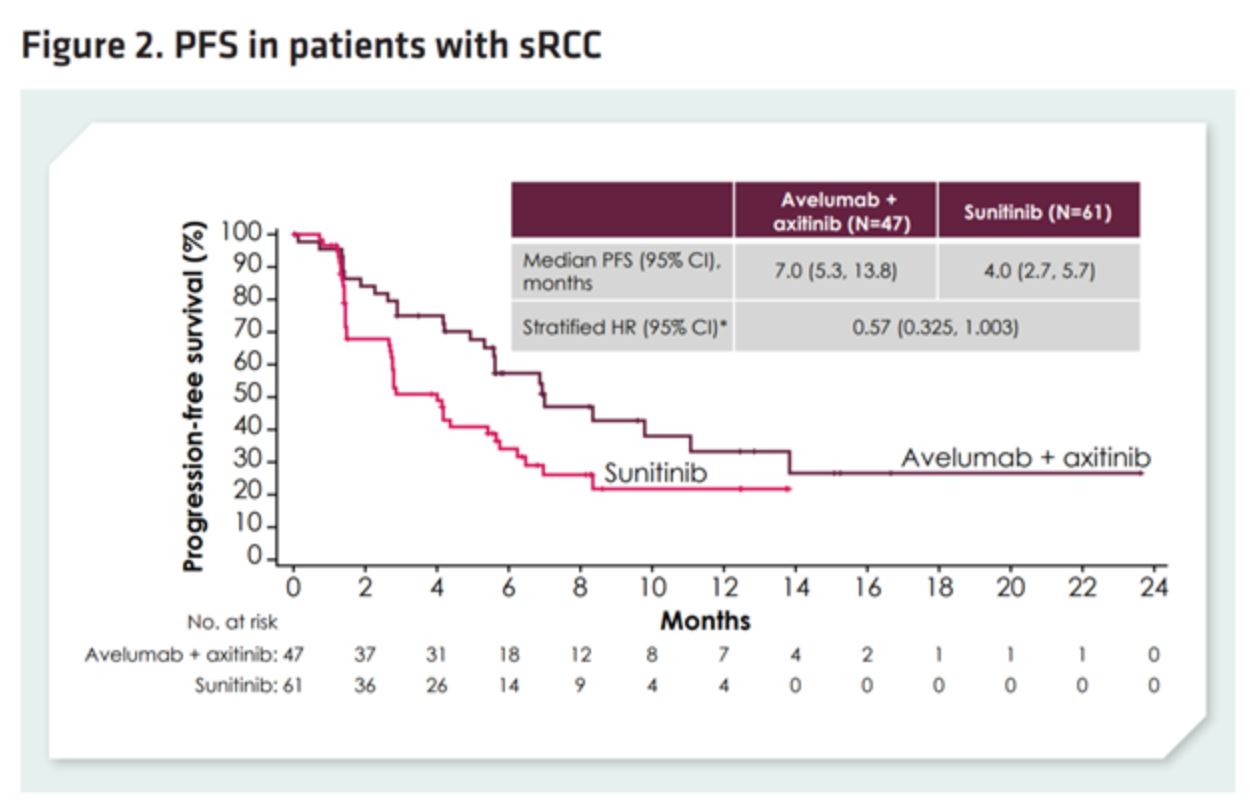 Among objective responders, aveluab plus axitinib patients generally exhibited a shorter time to first response at 1.6 months relative to 3.1 months with sunitinib.

Furthermore, patients treated with avelumab plus axitinib had a statistically significant 2.4-month improvement in duration of response. 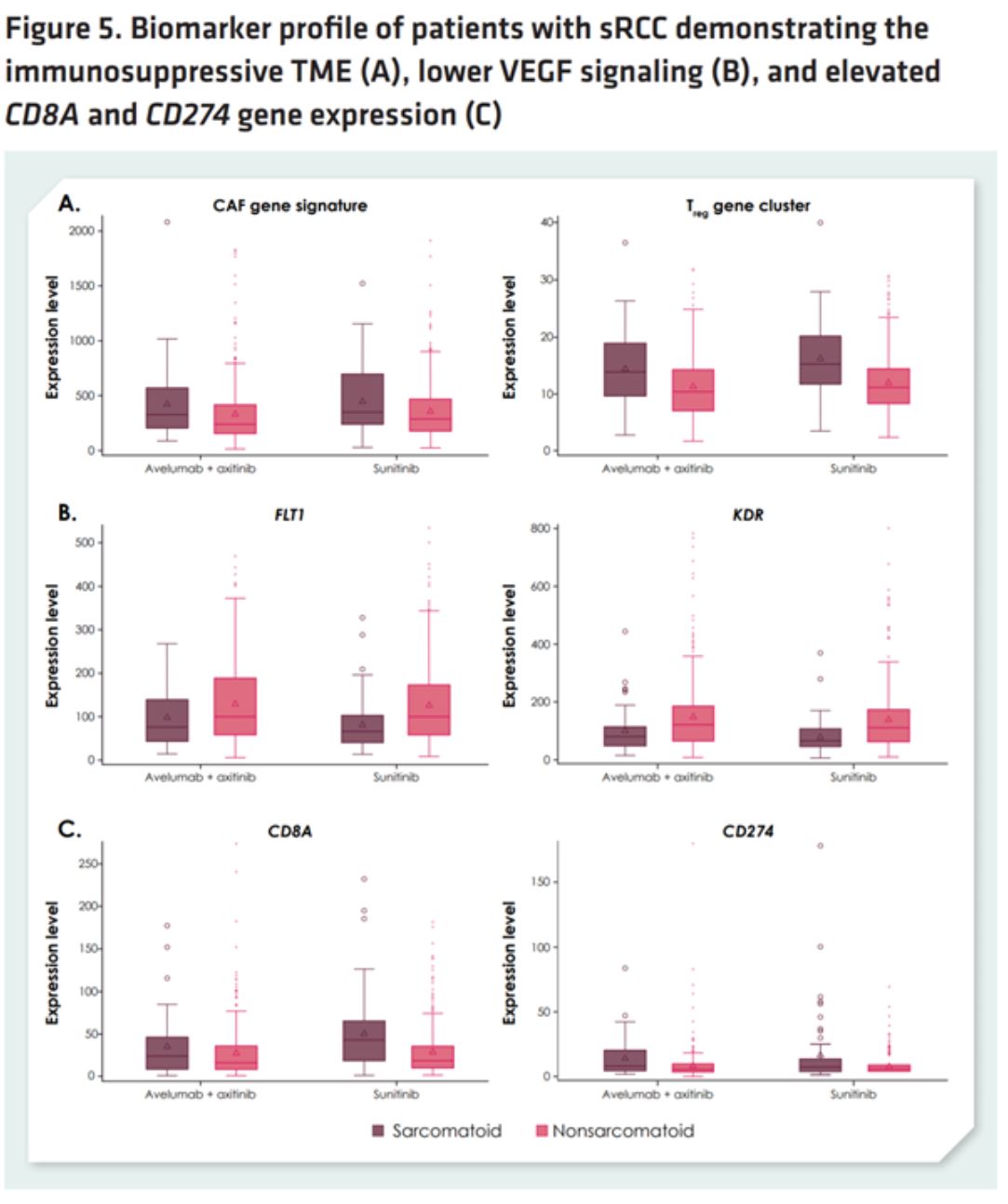 In summary, the Javelin Renal 101 data, taken in conjunction with the CheckMate214 data clearly suggest a benefit to immunotherapy and immune-oncology combinations in sarcomatoid RCC.