Refractory disease represents a critical issue in GCT management with < 5% of patients surviving. Many chemotherapeutic and targeted treatment strategies have been evaluated with low response rates highlighting an urgent need for new treatment options in this clinical setting. The APACHE study evaluated Durva alone or in combination with Treme in patients with refractory GCTs. The Durva monotherapy arm was closed early due to lack of efficacy. In the combination arm, there was only 1 partial response out of 20 patients with a median overall survival (OS) of 5.25 months. Compared to the landscape of chemotherapeutic regimens the overall response rate and complete response rate are disappointing. Dr. Kollmannsberger emphasized that the goal of treatment in GCT is always cure, thus the lack of any complete responses with this therapeutic regimen is almost certainly disqualifying. 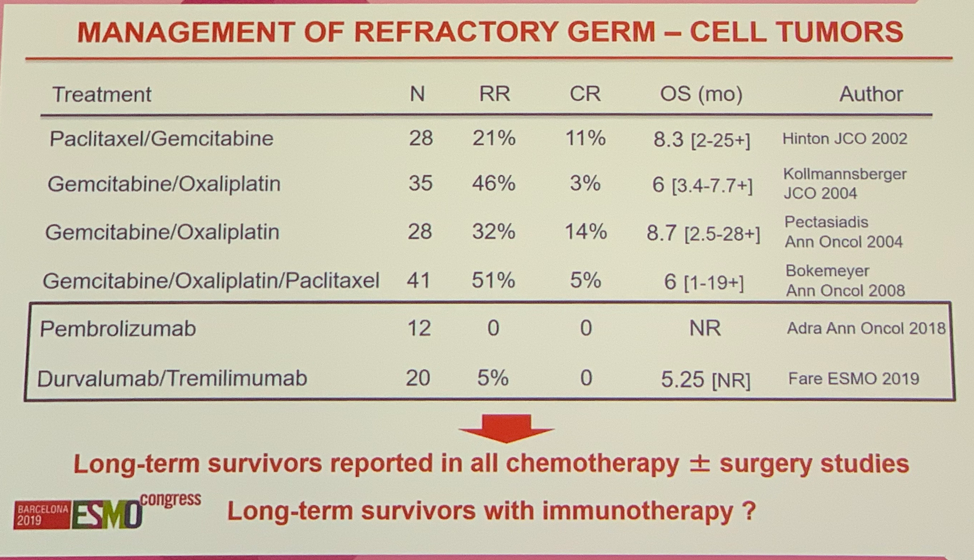 Evaluating the immunologic landscape of GCTs highlights why they may be less likely to respond to immunotherapy. Although, PD-1/PD-L1 expression is present in more than 50% of cases, a T-cell environment is present in less than 50% of cases, tumor mutational burden is very low, and microsatellite instability is very low to absent. Nevertheless, multiple immunotherapy trials in refractory GCTs are ongoing. An important focus moving forward will be better understanding the molecular and immunologic basis of GCTs. 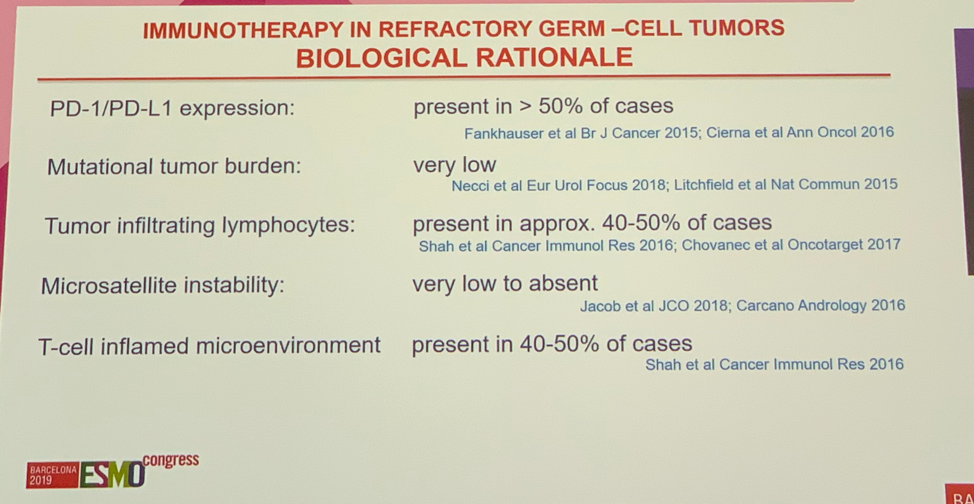 Moving on, Dr. Kollmannsberger discussed prognostic factors in metastatic seminomatous germ cell tumors and elevated HCG. Specifically, this study evaluated the prognostic value of HCG levels > 2000 IU/l pre-orchiectomy in patients with metastatic seminoma, finding a HR of 3.59 (p = 0.048) compared to those with HCG < 2000 IU/l. Notably, only 17 patients out of 392 had HCG levels > 2000 IU/l. Dr. Kollmannsberger noted that this finding is controversial as this result was not found in the International Germ Cell Cancer Collaborative Group data. Further, he noted that HCG in seminomatous GCTs, HCG is produced by interspersed syncytiotrophoblast cells, and that seminoma with syncytiotrophoblasts can be difficult to pathologically distinguish from choriocarcinoma. He summarized by highlighting numerous limitations in this study, including the small number of patients in the HGC high group (N=17), the even smaller number of events (<5 deaths) resulting in wide confidence intervals, missing treatment information in a significant percentage of patients, and no correlation with recurrence-free survival. Thus, Dr. Kollmannsberger concluded that this analysis is associated with a significant degree of uncertainty and that independent validation is needed before confirming high HCG as a prognostic biomarker for metastatic seminoma.

The final study abstract evaluated results from a global survey of patients with RCC from 43 countries. Data represents 1,983 respondents, 1,400 of whom were patients and the remaining 583 were caregivers. Key areas of inquiry included clinical trials, patient knowledge and understanding, quality of life, and shared decision making. When asked about subtype understanding, 43% of respondents stated they “did not understand their subtype” and an additional 38% stated they “were not told their subtype at diagnosis.” 1 in 3 patients reported not being engaged in their treatment decisions at all. 70% of patients reported not being asked to participate in clinical trials; 89% of those patients said it was “fairly likely they would have participated if asked.” 96% of respondents reported experiencing psychosocial issues related to their RCC diagnosis, citing depression-related anxiety, fear of recurrence, fear of dying, and general anxiety. Dishearteningly, 50% of patients reported not talking about their psychosocial issues with their healthcare providers. 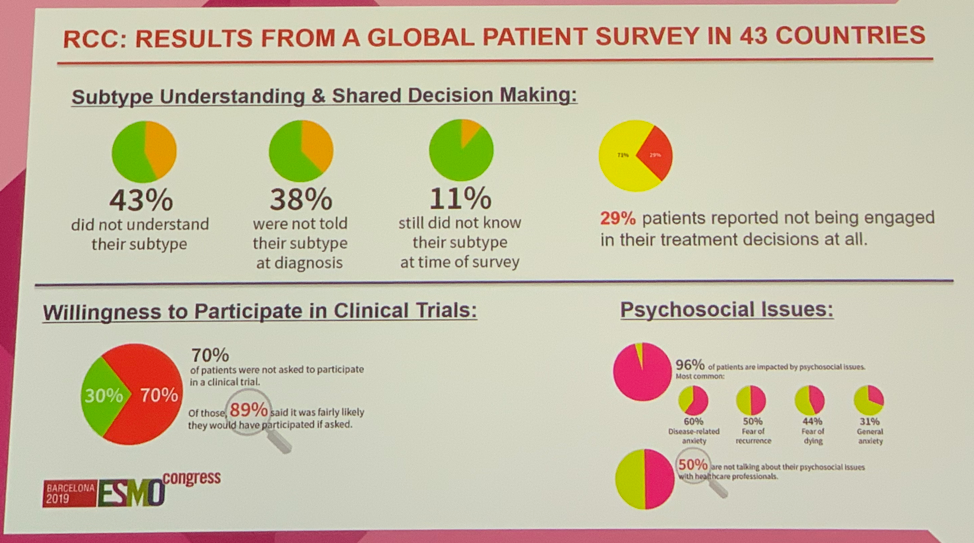 Dr. Kollmannsberger discussed the impact of these results, but cautioned that survey studies like this have many limitations and potential biases including selection bias, non-response bias, and recall bias. Additionally, a standard set of questions was utilized in this study, but respondents represented diverse backgrounds, cultures, and educations, which could confound results. Nevertheless, this study highlights a significant lack of information, patient engagement, and lack of psychosocial support provided to patients with RCC. There is little agreement on the type and amount of information patients require, patient satisfaction with the information received, and the relative importance of information needs and sources. He concluded that physicians must adapt to providing more and better information and nominated cooperation between physicians and patient support groups as a solution to fill gaps to satisfy patient needs.