Barcelona, Spain (UroToday.com) Single-agent, sequential treatment has been the standard of care in advanced renal cell carcinoma (RCC) for many years – with anti-angiogenic therapy, multi-kinase inhibitors, and anti-PD-1 directed monoclonal antibodies constituting the backbone of therapy. In advanced RCC (after 1 prior line of anti-angiogenic therapy), nivolumab (nivo) shows an overall response rate (ORR) of 25%.1 In previously untreated IMDC intermediate and poor risk advanced RCC, nivolumab plus ipilimumab (nivo + ipi) demonstrated an ORR of 42%.2 The rate of grade 3 and 4 treatment-emergent adverse events (TEAEs) with nivo + ipi is 46% compared to 19% for nivo alone.1,2 Dr. Marc-Oliver Grimm presented results of TITAN-RCC, a large, Phase 2 study investigating a tailored approach starting with nivo alone, but using nivo + ipi as an “immunotherapeutic boost” in non-responders to improve efficacy and reduce TEAEs.

Notable inclusion criteria for TITAN-RCC included patients with metastatic or advanced clear cell RCC, intermediate or high risk by IMDC, measurable disease by RECIST v1.1, KPS 70%, and evaluable tumor for PD-L1 expression. Notably, this study included two independent cohort of patients enrolled with 1) no prior therapy (first-line treatment) or 2) one line of prior therapy with a VEGF tyrosine kinase inhibitor (second-line treatment). All patients received nivo 240 mg every 2 weeks with tumor assessment after 4 and 8 doses. Patients with early progressive disease (PD) after 4 doses received two doses of a nivo + ipi boost, after which their response determined whether they received additional doses of nivo + ipi, or returned to nivo maintenance. Patients without PD after 4 doses, were re-assessed after 8 doses; those who had a complete response (CR) or partial response (PR) continued on nivolumab maintenance while those with stable disease (SD) or PD proceeded to nivo + ipi boost. The primary endpoint was ORR with secondary endpoints of progression-free survival (PFS), overall survival (OS), RR after nivo + ipi boosts, and safety. 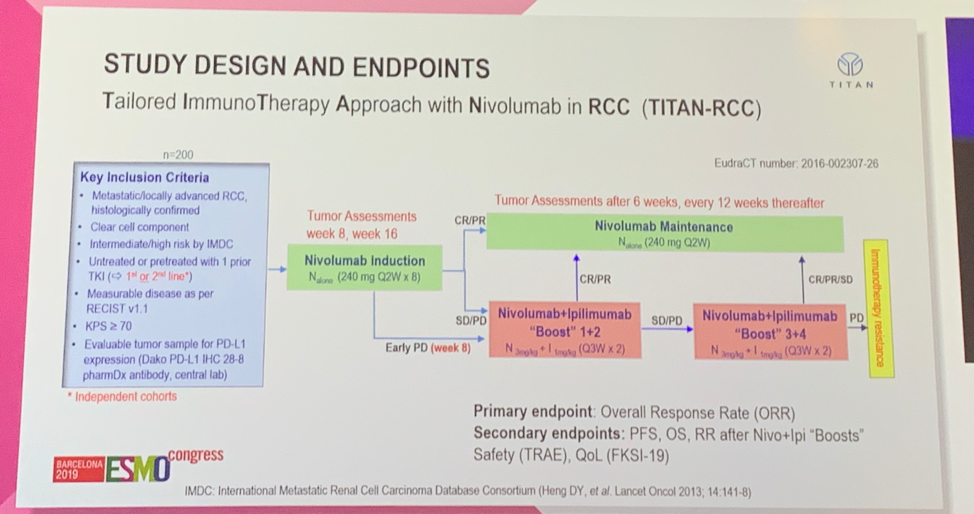 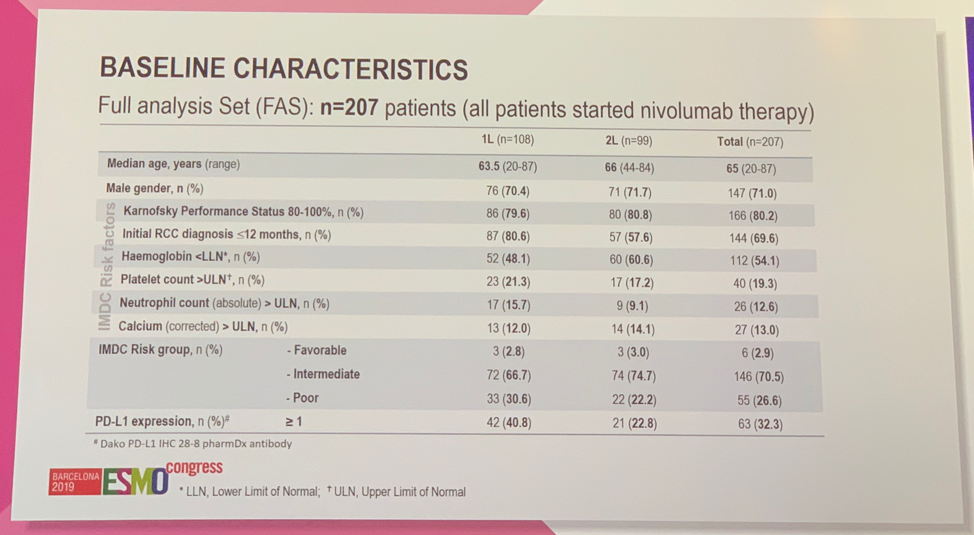 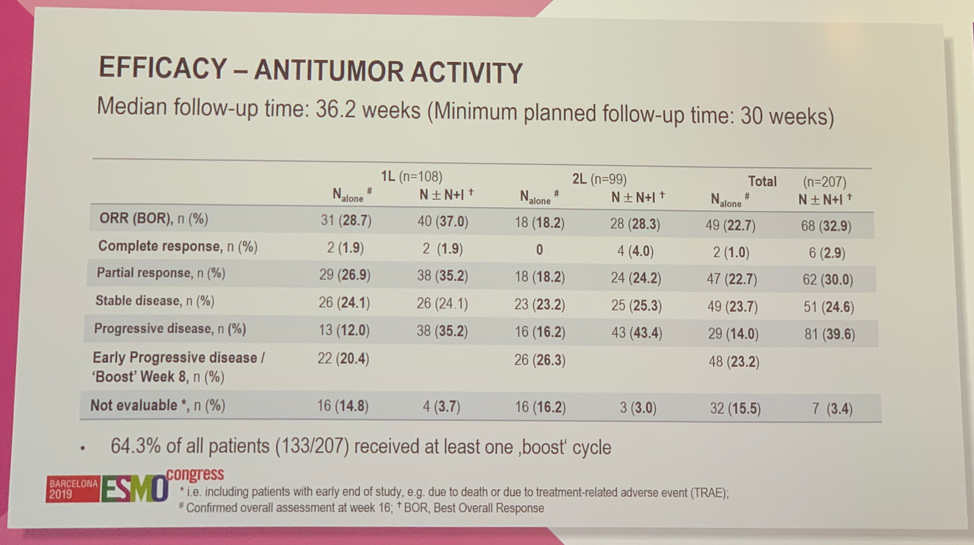 TITAN-RCC is the first study to assess the impact of a tailored approach using ipilimumab as an immunotherapeutic boost to nivolumab monotherapy. This approach improved the ORR from 28.7% to 37.0% in the first-line treatment setting and from 18.2% to 28.3% in the second-line setting. There were no new safety concerns. This study provides further evidence to the added value of ipilimumab in combination with nivolumab in advanced RCC. Further follow-up is ongoing to characterize duration and depth of response, and may support this innovative treatment strategy based on individual response.