Barcelona, Spain (UroToday.com) Atezolizumab has received regulatory approval for patients with locally advanced or metastatic urothelial carcinoma.  This has occurred for both cisplatin-ineligible patients in the first-line setting and also for those in the post-platinum treated setting.1, 2  In other malignancies, such as lung cancer, major advances have been made in treatment outcomes when cytotoxic chemotherapy has been combined with up front checkpoint inhibition with immune-oncology (IO) agents.  Hence, multiple efforts have been launched with combination chemotherapy and atezolizumab, an anti-PD-L1 antibody as well as pembrolizumab, an anti-PD-1 antibody, in the first-line metastatic urothelial carcinoma setting.


At the 2019 European Society of Medical Oncology (ESMO) Congress, the results from the IMvigor130 trial was presented by Dr. Enrique Grande. 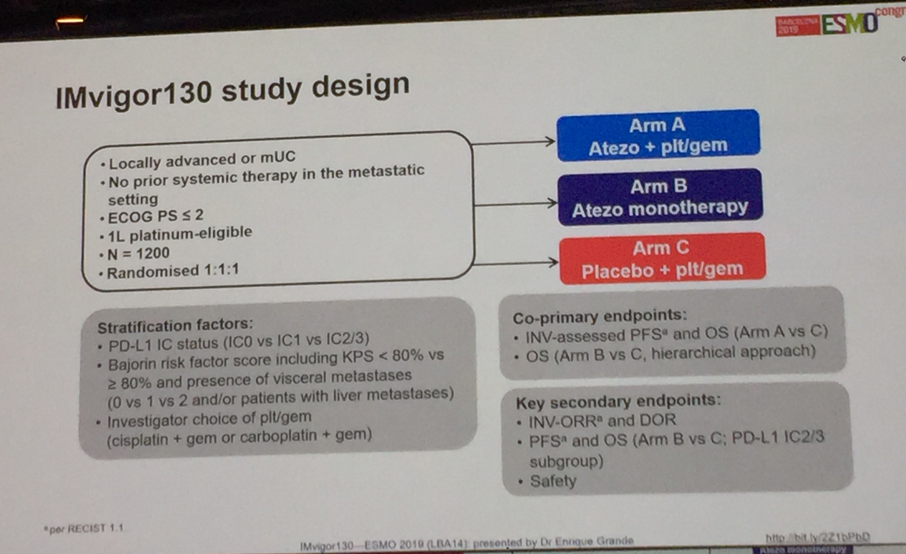 This trial randomized locally-advanced  or metastatic urothelial carcinoma patients to atezolizumab plus platinum/gemcitabine (Arm A) vs. atezolizumab monotherapy (Arm B) vs. placebo plus platinum/gemcitabine (Arm C).  The platinum agent to be used was decided by the investigator and could either be cisplatin or carboplatin.  The co-primary endpoints were investigator assessed progression-free survival (PFS) of Arm A vs. Arm C and overall survival of Arm B vs. Arm C with a hierarchical statistical approach.  The preset one-sided alpha was 0.025 with further testing on overall survival between Arm B and C to occur only if Arm A was found to be superior to Arm C for overall survival. 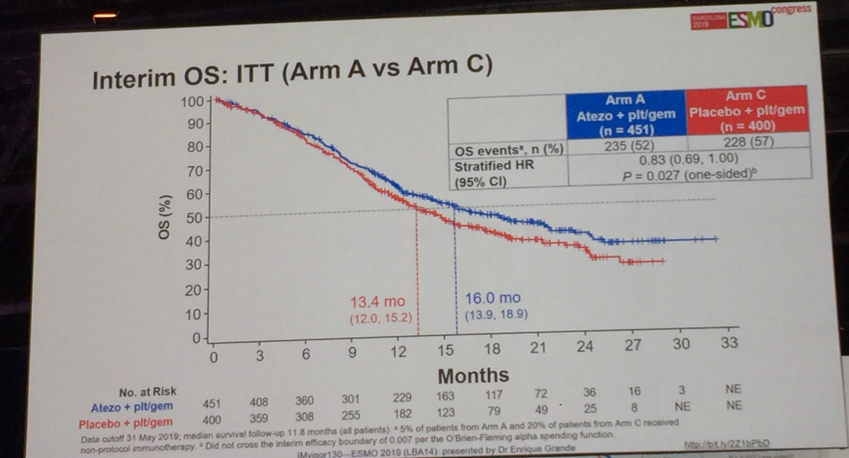 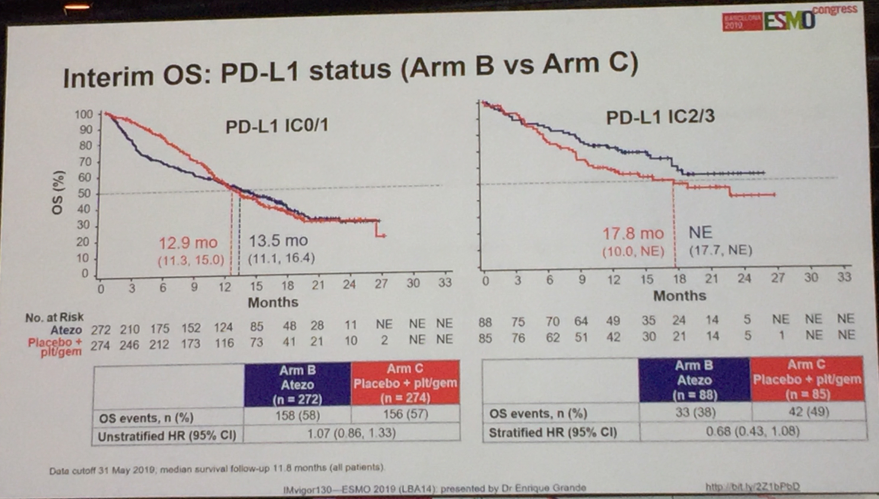 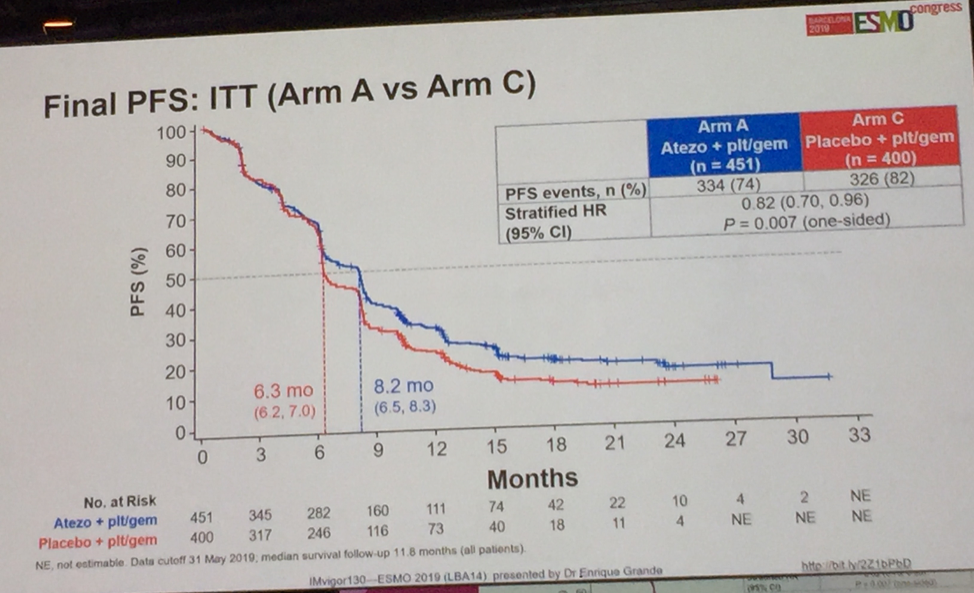 The trial was amended in response to previous concerns by the Independent Data Monitoring Committee when single agent atezolizumab was felt to be inferior to chemotherapy, in patients with low PD-L1 immunostaining of tissue.  Although the trial was amended to exclude enrollment of PD-L1 low patients to single agent atezolizumab, the majority of the patients had already been accrued.  At ESMO 2019, the survival curves presented for PD-L1 high patients certainly appear visually and numerically better than chemotherapy, although no formal statistical testing has been performed given the hierarchical design.

Dr. Thomas Powles then proceeded to provide an insightful interpretation of these results and whether they should change our current treatment algorithm.  He felt that with the significant delay in PFS, yet only trend for overall survival, that we should wait on more mature overall survival data before instituting up front chemotherapy-IO into our clinical practices.  Although, he was impressed with the single agent atezolizumab performance for PD-L1 high staining patients, he believes more granularity on the cisplatin/carboplatin breakdown from the control Arm C will be needed.  This is logical since atezolizumab is United States Food and Drug Administration approved for cisplatin-ineligible patients with high PD-L1 staining and a fair comparison of atezolizumab monotherapy would be restricted to control patients who were cisplatin-ineligible and received carboplatin.  The situation may be even further compounded by the large number of patients who were not cisplatin-ineligible, yet were still only administered carboplatin in the trial (25% in Arm A and 31% in Arm C).

In summary, combination chemotherapy-IO with atezolizumab plus platinum/gemcitabine offers a PFS benefit over platinum/gemcitabine chemotherapy alone for first-line locally advanced or metastatic urothelial carcinoma patients.  However, in a combination trial, improvement in PFS alone without overall survival may not be sufficient to change our standard treatment when it is unclear that the up-front combination is truly superior to sequential use of the agents.  As a result, we should be patient and wait for mature overall survival results.