Barcelona, Spain (UroToday.com) Genomic alterations in FGFR are known to occur in approximately 20% of advanced urothelial cancers,1 with activating mutations in FGFR3 and fusions involving FGFR2 and FGFR3 thought to both drive oncogenesis and render tumors susceptible to FGFR inhibition. Erdafitinib is a pan-FGFR inhibitor which recently received accelerated approval by the US FDA on the basis of a single-arm phase II study in platinum-refractory metastatic urothelial cancer.2

In this trial, erdafitinib demonstrated a 40% objective response rate and was generally well-tolerated. Per protocol, patients received erdafitinib at a starting dose of 8 mg daily with the option to increase the dose to 9 mg daily on day 14 if serum phosphate concentrations were <5.5 mg/dL. This design was formulated on the basis of phase I pharmacodynamic data suggesting hyperphosphatemia ≥5.5 mg/dL to be a pharmacodynamic efficacy target.

Dr. Tagawa presented a retrospective analysis of these patients to assess whether or not the presence of hyperphosphatemia was in fact associated with clinical outcomes. In addition to blocking FGFR signaling in urothelial cancer tumors, erdafitinib also inhibits FGFR signaling in the proximal renal tubule where it impairs function of the sodium-dependent phosphate co-transporter – the mechanism by which it is thought to induce hyperphosphatemia.

With respect to clinical outcomes, investigators found that patients who developed hyperphosphatemia within the first 3 months achieved a numerically higher objective response rate (43.1%) compared to patients whose serum phosphate levels remained <5.5 mg/dL. In fact, 3 complete responses were observed in the hyperphosphatemia group; none were recorded in the group with phosphate levels <5.5 mg/dL. 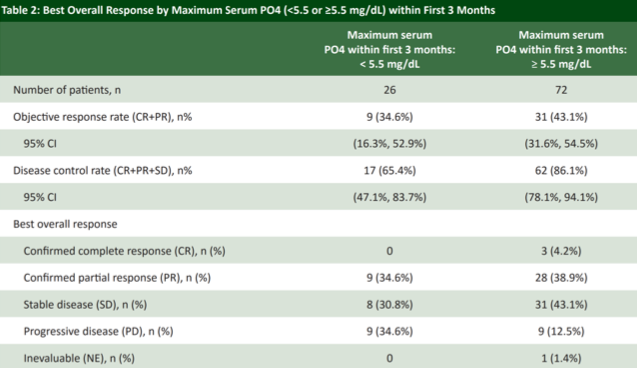 Furthermore, patients who were successfully up-titrated to the higher 9 mg dose had a numerically higher response rate than those who were limited to the 8 mg dose due to hyperphosphatemia at cycle 1 day 14, consistent with an antineoplastic dose-response effect. In addition, hyperphosphatemia was associated with a statistically significant improvement in both progression-free and overall survival, though this analysis is complicated by the preponderance of patients unable to be up-titrated, perhaps owing to an otherwise declining performance status despite therapy and may not be reflective of hyperphosphatemia as a predictive biomarker of survival.

Erdafitinib was generally very well tolerated, however, there is a trend toward more toxicity among patients who developed hyperphosphatemia. Among patients with serum phosphate concentrations ≥ 5.5 mg/dL there was generally a higher rate of grade ≥ 3 treatment-related adverse events, most notably nail changes, rash, and ocular toxicity. Patients receiving erdafitinib should undergo regular ophthalmologic exams for this reason. 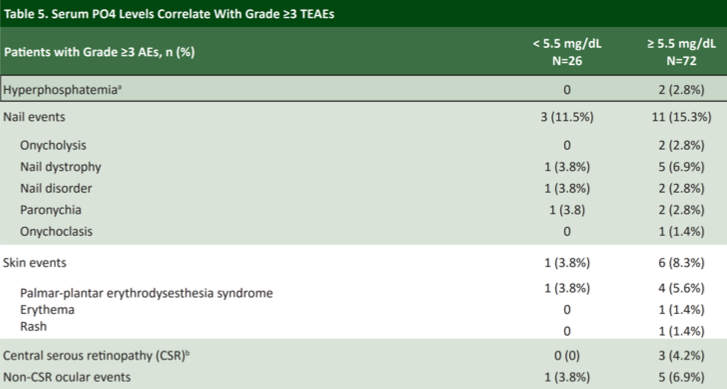 In summary, this retrospective analysis of a registrational single-arm study of the FGFR inhibitor erdafitinib suggests that the development of on-treatment hyperphosphatemia may be representative of FGFR target engagement by erdafitinib. Patients who were successfully up-titrated to the 9 mg dose achieved a numerically higher response rate of 48.8%. Future work will continue to study phosphate dynamics in response to FRFR inhibition as a pharmacodynamic marker.