Barcelona, Spain (UroToday.com) Platinum-based chemotherapy has been the standard first-line therapy for patients with metastatic urothelial cancer (mUC). Historically, response to standard of care second-line chemotherapy regimens is < 15%. Although immune checkpoint inhibitors (ICIs) now provide another option for patients with platinum-refractory mUC, response rates are similarly low, highlighting a critical need for novel therapeutic agents in this disease setting. Dr. Scott Tagawa presents the initial results from TROPHY-U-01: A Phase 2 open-label study of Sacituzumab Govitecan (SG) in patients with mUC after progression on platinum-based chemotherapy or an ICI.

SG is a Trop-2 directed antibody-drug conjugate linked to SN-38, a toxic payload that is the active metabolite of the chemotherapy drug irinotecan. Trop-2 is an epithelial cell surface antigen with high expression in mUC as well as other solid tumors, such as triple-negative breast cancer, for which SG has received FDA breakthrough therapy designation with a Phase 3 study ongoing (NCT02574455). Results in mUC from a Phase I/II single-arm basket study, previously presented by Dr. Tagawa at the ASCO GU 2019 Annual Meeting, demonstrated a 27% overall response rate (ORR) to SG among patients who had received prior platinum-based chemotherapy and an ICI with a PFS of 7.3 months.

The TROPHY-U-01 study has two cohorts: 1) 100 patients with mUC who progressed after prior platinum-based chemotherapy and an ICI, and 2) 40 patients with mUC who are platinum-ineligible and progressed after an ICI. All patients are treated with SG 10 mg/kg on days 1 and 8 of a 21-day cycle and treatment is continued in the absence of unacceptable toxicity or disease progression. The primary outcome is ORR with secondary outcomes including safety/tolerability, duration of response, progression-free survival (PFS), and overall survival. 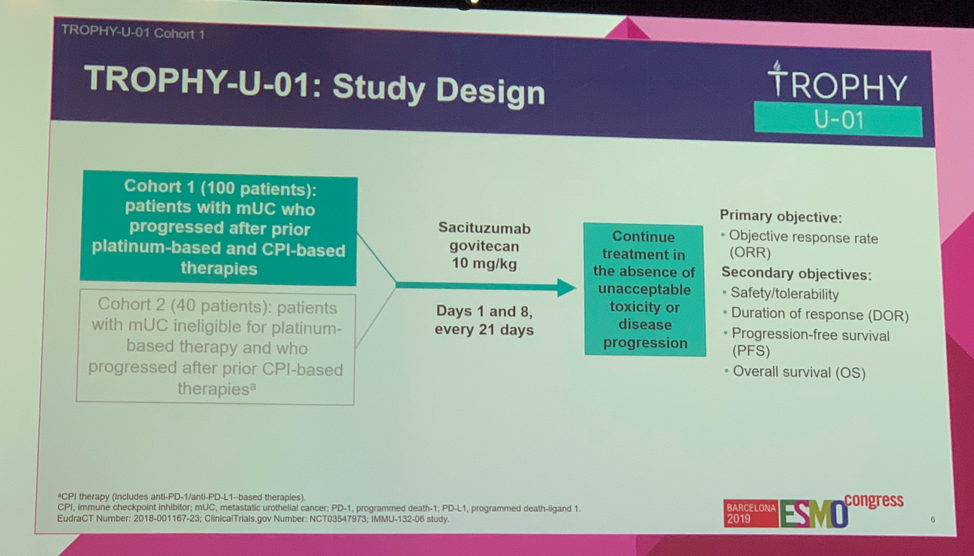 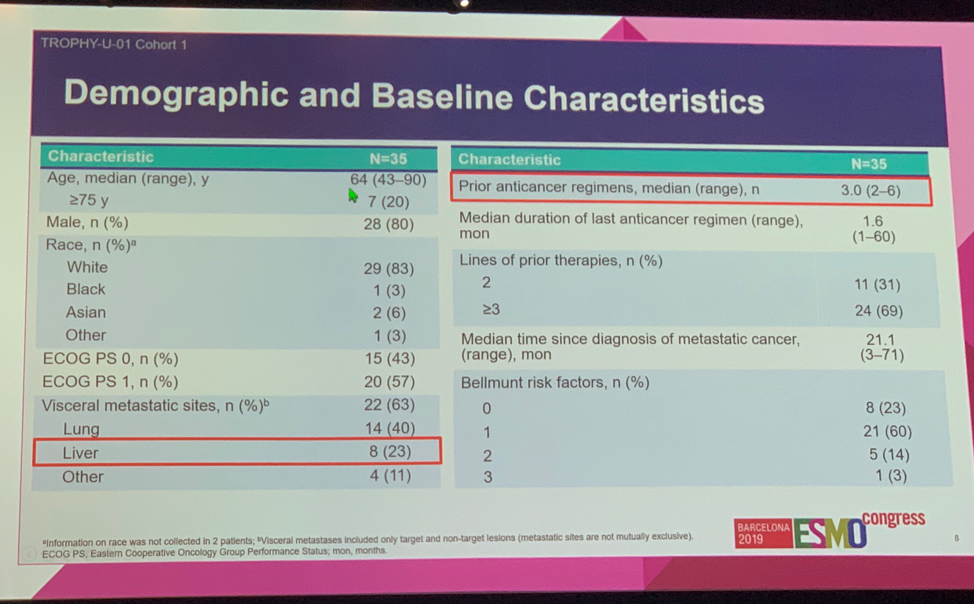 After a median follow-up of 4.1 months, 57% of patients continue on treatment. The ORR was 29% (10/35) with 6% of patients (2/35) achieving a complete response. This effect was consistent across subgroups. Of the 10 patients who responded, 8 had ongoing response at the time of data collection. 74% of patients demonstrated a reduction in tumor burden by RECIST criteria. 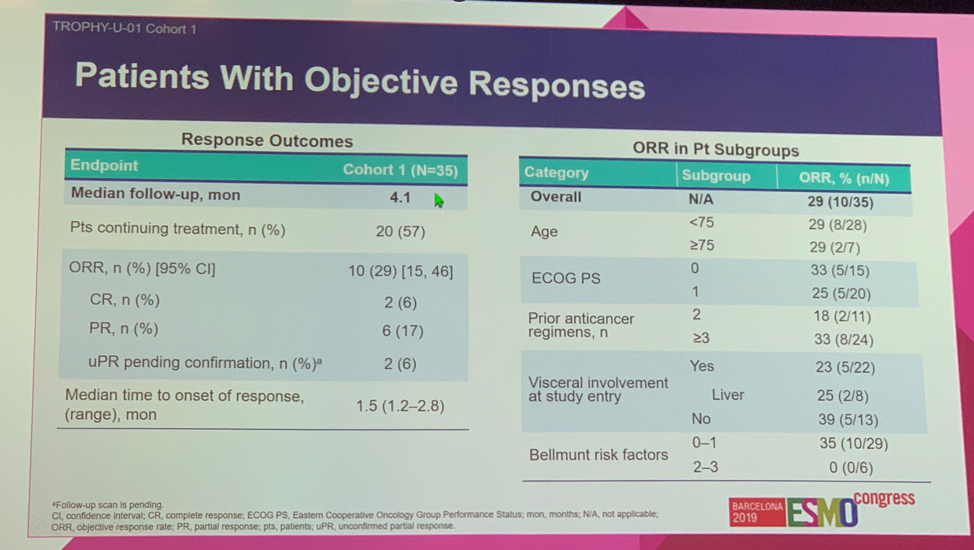 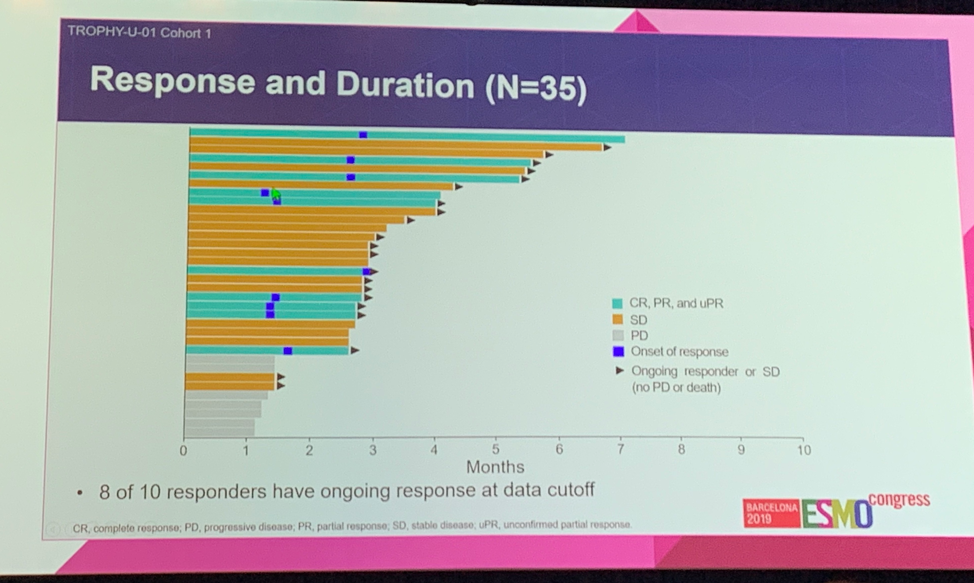 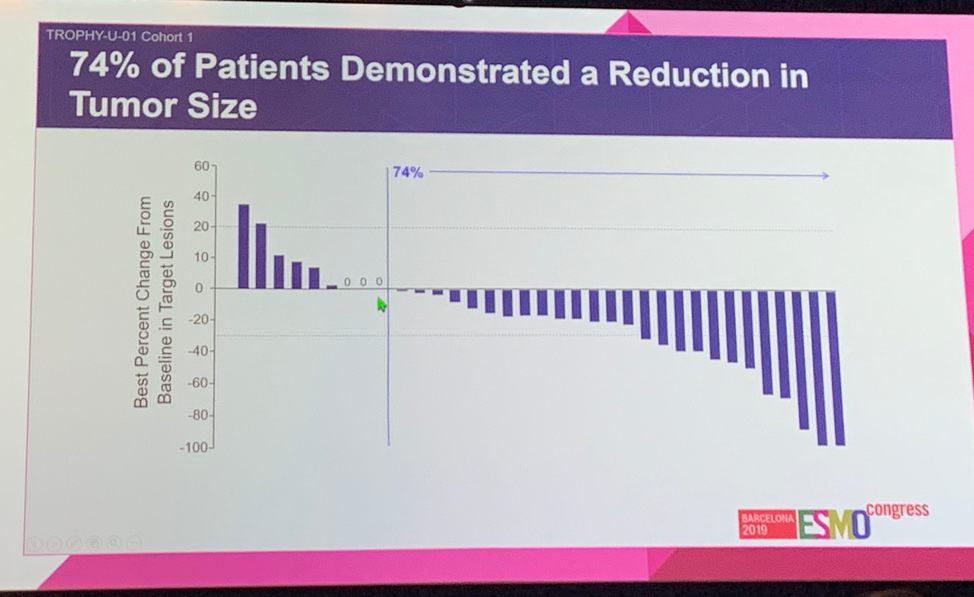 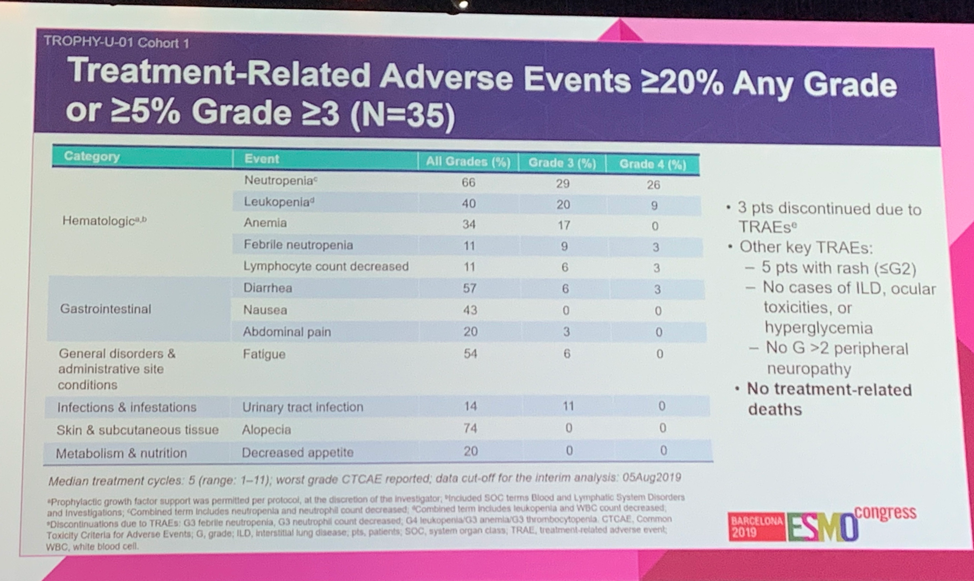 In conclusion, TROPHY-U-01 confirms the clinical activity of SG (ORR of 29%) in a heavily-pretreated population of patients with mUC post-progression on platinum-based chemotherapy and an ICI. SG was well-tolerated with a manageable, predictable safety profile. These data demonstrate that Sacituzumab Govitecan is a promising novel antibody-drug conjugate with the potential to change the treatment landscape of mUC in the third-line setting following platinum-based chemotherapy and an ICI.