The oligometastatic disease can be divided into to subtypes:

The older “standard” imaging techniques that were used in the past were most probably not specific or sensitive enough to diagnose these oligometastatic lesions accurately enough. The newer advanced imaging techniques, such as PET-PSMA scans, will help us to identify better and quantify the number of lesions.

Dr. Bossi moved on to discuss the logic and implications of treating the primary tumor in patients with synchronous up from denovo oligometastatic disease. The logic behind the treatment stems from various reasons, including analogy with other cancers, where cytoreductive treatment is standard of care, the thought that the primary tumor causes seeding of tumor cells, possible intra-tumoral synthesis of testosterone, and the resulting reduction of circulating tumor cells if the primary tumor is treated. In a large retrospective population-based study, treatment of the primary tumor resulted in improved overall survival (Figure 1)1. However, in a case-control prospective study, no benefit was witnessed from cytoreductive prostatectomy in patients with low-volume bone metastases2.

In the prospective HORRAD trial, androgen deprivation therapy (ADT) with concurrent radiotherapy was compared to ADT alone in patients with primary bone metastases3. This trial demonstrated no difference in the median survival, with 45 months in the radiotherapy group vs. 43 months in the control group, with a hazard ratio of 0.90, p =0.356. In a subgroup analysis of patients with PSA less than the median of 142 ng/mL, Gleason score <= 8, and less than five osseous metastases – no difference was shown in the overall survival. However, there was a separation of the Kaplan Meyer curves at two years follow-up, suggesting that with longer follow-up, a significant difference could be apparent. The limitations of this study include the fact that all patients had a high metastatic burden. Therefore, they were not exactly representative of the ideal oligometastatic patients. Furthermore, the selection of these patients was based solely on a bone scan – and there is no data on the status of the lymph nodes or visceral metastasis.

Figure 1 – Improvement in overall survival resulting from treatment of the primary tumor in oligometastatic disease:

The PEACE-1 GETUG EROTC European phase 3 trial of abiraterone +/- docetaxel and local radiotherapy in patients with denovo metastatic prostate cancer, is an ongoing study with multiple arms, as seen in figure 2. The primary endpoints include overall survival and progression-free survival. Hopefully, this study will be able to give us more data on the effect of treatment of the primary tumor in oligometastatic patients. 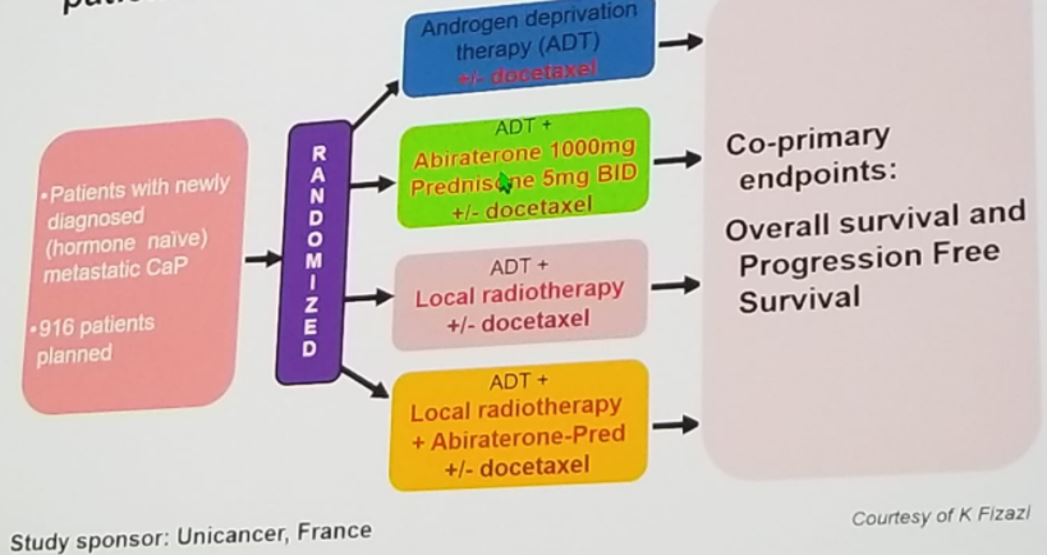 There has been some concern that radical prostatectomy in oligometastatic patients might confer worse adverse event profile. A multicenter retrospective study analyzed the perioperative outcomes of 106 patients in six high-volume centers, who underwent radical prostatectomy for distant metastatic prostate cancer at presentation4. The results demonstrated that 79.2% of patients did not suffer any complications; but the positive-margins rate was present in 53.8% of the patients, lymphocele was present in 8.5% of patients, and wound infections were in 4.7% of patients. These percentages were significantly higher than those reported in surgeries performed for standard indications for localized disease.

Next, Dr. Bossi moved on to discuss the metastases directed treatment of patients with metachronous metastatic prostate cancer. Despite advancements in the field of imaging, the biggest problem we have in oligometastatic patients is the underestimation of the number and volume of metastatic lesions with currently available imaging modalities5. Even when using the advanced PET-PSMA imaging, the positivity rate of diagnosis ranges from 11.3%-58.3% and 11%-61.5% in PSA less than 0.2 ng/ml, and PSA less than 0.5 ng/ml, respectively, as seen in figure 3. 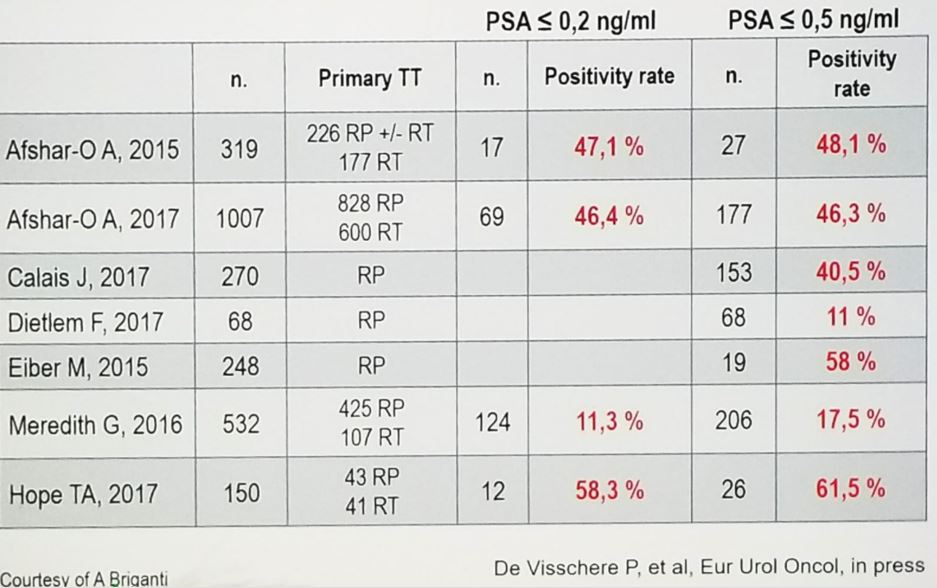 
The STOMP trial6, which was a multicenter, randomized, phase II study, analyzed patients with asymptomatic prostate cancer with biochemical recurrence after primary treatment with curative intent, and three or fewer extracranial metastatic lesions on choline positron emission tomography. Patients were randomly assigned (1:1) to either surveillance or MDT of all detected lesions (surgery or stereotactic body radiotherapy). A total of 62 patients were enrolled. At a median follow-up time of 3 years, the median ADT-free survival was 13 months for the surveillance group and 21 months for the MDT group (hazard ratio, 0.55, p = 0.08). The authors concluded that ADT-free survival was longer with MDT than with surveillance alone for patients with oligo-recurrent prostate cancer.

Dr. Bossi concluded his talk, stating that we still lack meaningful level one evidence and cannot accurately answer the question of whether treatment of patients in the oligometastatic disease is prudent. As a prospective level one evidence continues to flow soon, more data will be available to formulate proper treatment strategies.

Further Related Content:
What is New in Metastatic Castration-Resistant Prostate Cancer? - The Critical Need of a Multidisciplinary Approach for the Treatment of Prostate Cancer