ERA 223 seeks to combine these two widely used therapies, hoping for improved clinical outcomes without adding toxicity, given that the two modes of action and safety profiles are unique. Data from an early access program contained 154 patients who had concomitant use of abiraterone and this appeared to improve median overall survival (NA vs 13 months)5. Non-randomized data also suggests that the use of enzalutamide with Radium-223 is also safe6. This study formally evaluates this combination by randomizing patients to abiraterone 1000 mg daily vs placebo in addition to prednisone 5 mg twice daily. 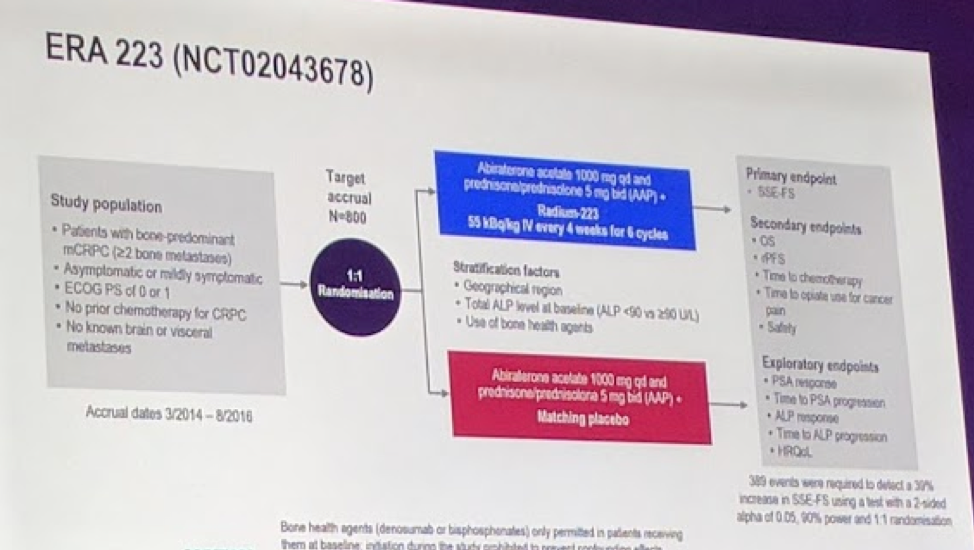 806 patients were randomly assigned to either abiraterone + ADT + prednisone (AAP) + Radium-223 or AAP + placebo.  Baseline characteristics including age, race, Gleason score, and concurrent use of bisphosphonates was balanced.

In November of 2017, the study was unblinded early because of a signal of more fractures and deaths in the AAP + radium group and the protocol was amended to allow initiation bisphosphonates. In terms of overall survival analysis, there was no significant difference between AAP + radium-223 and placebo + radium (30.7 months vs 33.3 months, HR 1.195 (95%CI 0.95-1.505, P= 0.128).  There was no significant difference between the two groups for the prespecified secondary endpoints, which included radiographic progression-free survival, time to cytotoxic chemotherapy, and time to opiate use for cancer-related pain. There was also no difference in two exploratory endpoints, time to PSA progression and time to deterioration of the quality of life, as defined by the HRQoL. 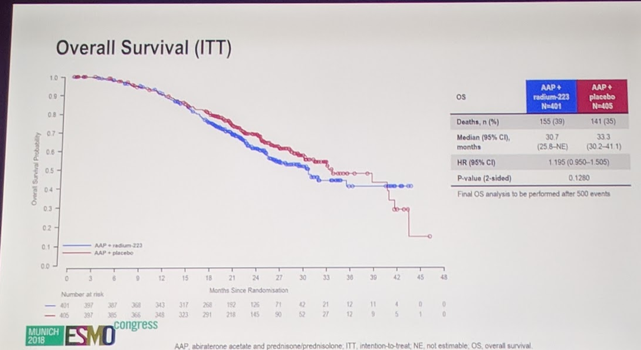 In terms of treatment-emergent adverse events, there was no difference in total events or grade 3-5 events. However, in terms of specific events, there was a greater number of fractures in the AAP + radium group than placebo + AAP group (26% vs 10%). As expected, patients who had been on bisphosphonates had fewer events than those without, and the protective effect of bisphosphonates applied to both the cohort who received radium and the cohort without radium. 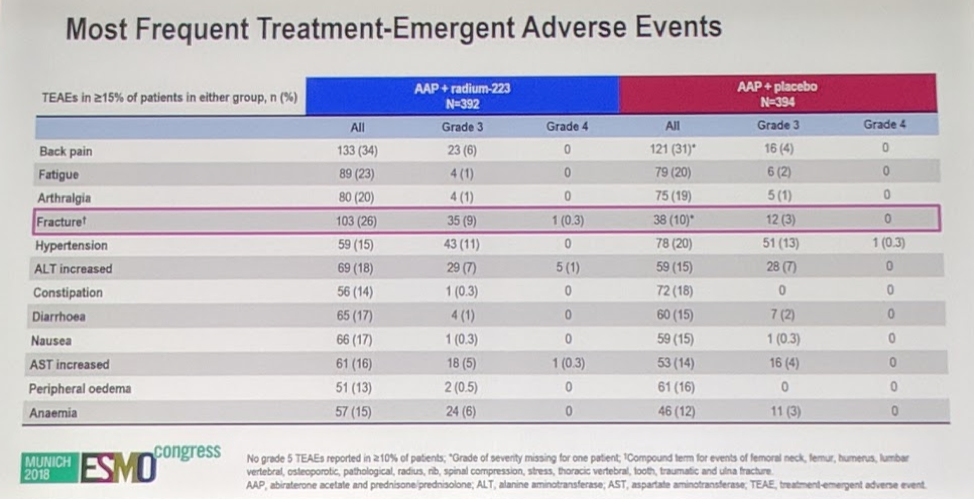 In summary, the addition of radium-223 to first-line abiraterone for patients with mCRPC is not recommended based on the results of this study. Of note, both groups had very limited bisphosphonate prescription at baseline, despite having mCRPC with bony involvement, a well-established indication for skeletal protection6.  Future studies may want to consider optimizing bone health for all patients prior to starting investigational combination therapy, as the addition of additional therapy may increase the risk of skeletal events as has been seen in this study. At this time, radium-223 certainly still plays a role in mCRPC, but should not be used as first-line therapy in combination with abiraterone.