He began highlighting muscle invasive bladder cancer (MIBC) as a model for clinical research based on high rates of relapse and mortality following surgical intervention alone, the relatively poor use of neoadjuvant chemotherapy in spite of international guidelines, the poor prognosis of patients with residual MIBC following neoadjuvant chemotherapy, and the uncertainty of treatment approaches in patients who are ineligible for cisplatin.

Taken together, these offer the potential for significant advances in the care of these patients with gaps in both knowledge and care currently.

The PURE-01 study, Neoadjuvant Pembrolizumab for Muscle-invasive Urothelial Bladder Carcinoma (PURE-01) led by Dr. Necchi, addressed many of these issues providing evidence that:

1. single agent pembrolizumab has clinical activity in the neoadjuvant setting, as evidenced by 40% pT0 rates and 54% downstaging to non-muscle invasive disease.
2. we may expand the population of patient eligible for neoadjuvant treatment, through proven efficacy in patients with variant histology including squamous cell carcinoma and lymphoepithelioma-like tumors.
3. radiographic assessment with mpMRI may allow the identification of complete response following pembrolizumab induction, potentially offering the opportunity to spare surgical resection. Among patients with “radiologic complete response”, pathologic complete response rates were between 60-70% with an AUC for radiologic assessment of 0.76 on internal and 0.74 on external validation.
4. neoadjuvant immunotherapy is safe and doesn’t compromise subsequent surgical outcomes. High-grade complications were identified in 34% of patients who underwent radical cystectomy following neoadjuvant pembrolizumab.

Beyond PURE-01, Dr. Necchi highlighted many other trials of immunotherapy approaches in patients with MIBC, most of which are small studies. However, pT0 were relatively consistent between 35-45%. However, longer-term outcome data is generally lacking. Further, heterogeneity between studies with respect to biomarkers utilized makes clinical applicability of these somewhat difficult. Even where the same test was used, results differed between trials. 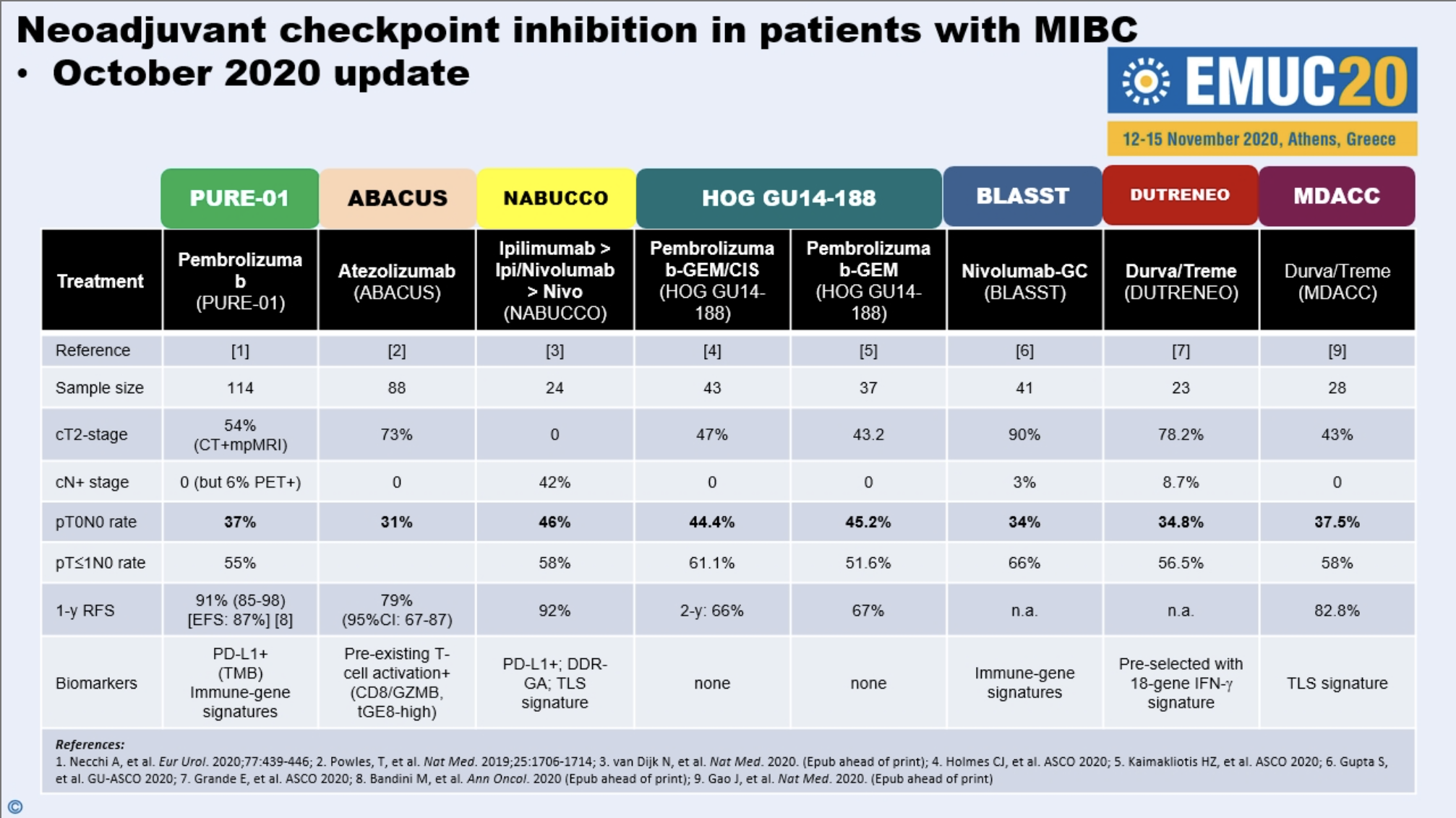 In addition to these genetic assessments, RNA-based molecular subtyping has also demonstrated an ability to identify patients who are most likely to benefit from neoadjuvant chemotherapy.

Many of these are compared to radical cystectomy alone in patients who are cisplatin-ineligible.

Dr. Necchi then highlighted that data from PURE-01 and from NABUCCO, Neo-Adjuvant Bladder Urothelial Carcinoma COmbination-immunotherapy (NABUCCO), has shown good recurrence-free survival up to 18 months following the start of therapy, potentially independent of pathologic response.

In the context of neoadjuvant therapy, Dr. Necchi discussed the potential switch in phenotype between tumors present at transurethral resection of bladder tumor (TURBT) and those that remain at the time of cystectomy. Based on data presented at ESMO 2020, he showed that there is significant so-called “subtype switching” with only 27% concordant subtypes between TURBT and cystectomy. These data suggest the need for targeting of post-operative therapy on the basis of the phenotype at the time of cystectomy, taking into account what neoadjuvant therapy was utilized.