This website uses cookies to ensure you get the best experience on our website. Privacy Policy
(UroToday.com) The treatment landscape in the first-line therapy of metastatic renal cell carcinoma (mRCC) has rapidly evolved over the past 3 years. In spite of all these changes, more changes are coming. In a presentation at the European International Kidney Cancer 2021 Virtual Annual Meeting, Dr. Vano discussed biomarker-driven trials.

He first argued for the rationale of biomarker-driven trials based on the rationale that metastatic kidney cancer represents an incurable disease and current therapies have significant toxicity. He further emphasized that, based on drug development over the past two decades, there are many treatment options in mRCC that improve survival. 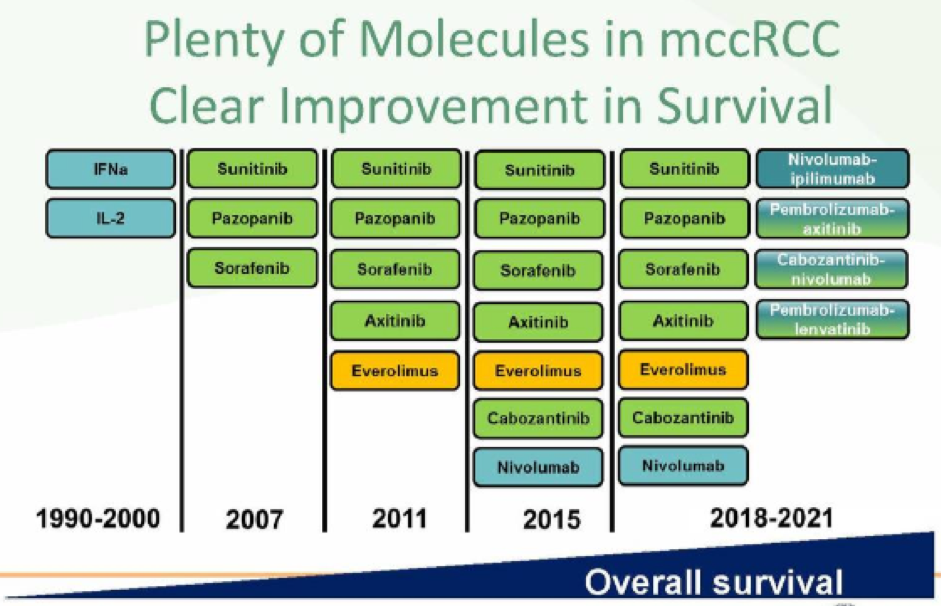 Given all these treatment options, we need biomarkers of treatment efficacy. Dr. Vano first emphasized that wile PD-L1 expression provides informative data regarding benefit comparing immunotherapy-based regimes to TKI alone, it is not useful to guide treatment decision making between TKI-IO vs IO/IO regimes.

In contrast, he suggested that “one of the best biomarkers” is a gene expression signature. One example of such a signature was derived from an ancillary analysis of the JAVELIN trial. This 26-gene signature provides predictive ability for patients treated with avelumab and axitinib, but not among patients receiving nivolumab + ipilimumab. Further work is needed to assess its ability among patients undergoing other Tyrosine Kinase Inhibitors (TKI)/IO regimes.

A second example of a gene expression signature comes from the Nivoren trial, in which the angiogenesis and immune signatures were combined to identify four clusters, which are associated with prognosis. These clusters could allow better identification of responders to either nivolumab, nivolumab + ipilimumab or TKI. ccrcc1 “immune-low” and ccrcc4 “immune-high” tumors have been associated with the poorest outcomes, whereas ccrcc2 “angio-high” and ccrcc3 “normal-like” tumors have been associated with the best outcomes.

These are the first randomized data based on molecular risk group assessment to guide first-line therapy in metastatic ccRCC. In particular, among patients with the ccrcc4 signature, use of combination therapy may not be required based on relatively little difference in response rate. Patients with the ccrcc2 signature may be most appropriate for IO-TKI combinations given the benefit seen with TKI monotherapy. Notably, ancillary analyses of CheckMate-009 demonstrate that the ccrcc4 signature is associated with response to IO therapy, but resistance to TKI therapy.

As a word of caution, he emphasized that the BIONIKK trial had a 35% screen failure rate due to need for frozen tumors. There are further challenges in identifying the risk biomarkers and the right study design to provide actionable results. However, this field of research holds, in Dr. Vano’s view, a lot of opportunities in spite of these challenges.