Dr. Ribal states that imaging has changed many concepts in advanced prostate cancer. For example, she notes that we have likely treated many patients with locally advanced/localized high-risk patients without knowing that they are oligo M1 disease. She points to a paper by Eiber et al.2 that assessed 248 patients with biochemical recurrence after radical prostatectomy and the ability of 68Ga-PSMA PET/CT to detect recurrence. The detection rates were 96.8% at PSA ≥2, 93.0% at PSA 1 to <2, 72.7% at PSA 0.5 to <1, and 57.9% for PSA 0.2 to <0.5 ng/mL. Whereas detection rates increased with a higher PSA velocity, no significant association could be found for PSA doubling time.

From 2015-2017, we had a very exciting time period for advanced prostate cancer. First, we had the STAMPEDE3 and CHAARTED4 trials demonstrating that men with de novo metastatic/locally advanced disease had a 22% and 39% decreased risk of death, respectively with the addition of docetaxel to ADT. Subsequently, at the 2017 ASCO annual meeting, STAMPEDE5 and LATITUDE6 reported data from their phase III trials assessing abiraterone + ADT among men with de novo metastatic/locally advanced disease. STAMPEDE demonstrated a 37% decreased risk of death in the abiraterone group, compared to 38% in the LATITUDE trial.

Dr. Ribal notes that we have also seen an upswing in studies evaluating the role of surgery in locally advanced and oligometastatic disease. Among 106 patients in the USA, Germany, Italy, and Sweden with newly diagnosed M1 disease who underwent radical prostatectomy, 79.2% of patients did not suffer any complications7  The positive-margin rate was 53.8%, lymphocele rate was 8.5%, and wound infection rate was 4.7%. At a median follow-up of 22.8 months, 88.7% of men were still alive. In a subsequent study by Sooriakumaren et al.8 , they used a Swedish population-based database to assess outcomes among 630 men undergoing radiation therapy, 120 undergoing radical prostatectomy, and 17,602 patients treated with ADT. Patients treated with initial ADT had a nearly three-fold higher hazard of prostate-cancer death compared with initial radical therapy (HR 2.87, 95%CI 2.16-3.82).

Based on improved imaging, there has also been the adoption of salvage pelvic lymphadenectomy among appropriately selected patients. In a review of the role of salvage lymph node dissection, Heidenreich et al.9 highlighted several important points:


As follows is Dr. Ribal’s algorithm for the treatment of advanced prostate cancer: 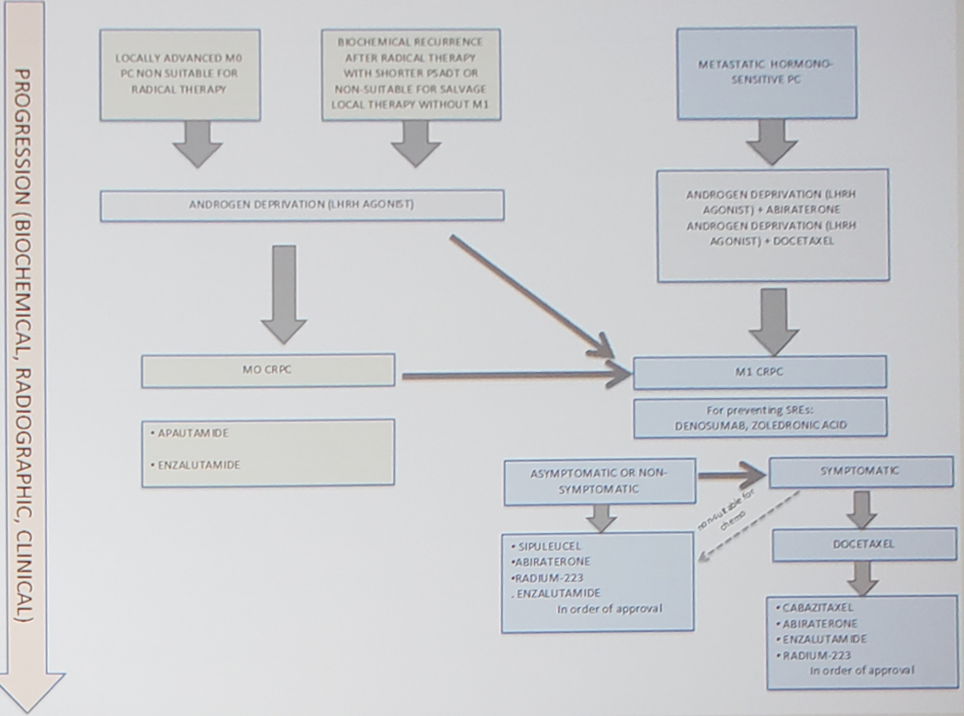 Because of the advances in the treatment of mCRPC, there are now patients treated with first, second, third and even fourth lines of therapy. The Prostate Cancer Clinical Trials Working Group 310, provides the following schematic:

Dr. Ribal concluded this high-level overview of advanced prostate cancer by reminding everyone that we must have patient-centered care based on Picker’s Eight Principles: