(UroToday.com) The treatment for metastatic hormone-sensitive prostate cancer plenary session at the European Association of Urology 2021 annual meeting included a presentation by Dr. Alberto Briganti discussing surgery for local treatment to the primary +/- to the lymph nodes. Dr. Briganti notes that we must acknowledge that (i) there are no prospective randomized trials available assessing surgery in oligometastatic prostate cancer, (ii) surgery has been tested in retrospective/prospective registries only (with possible patient selection biases), (iii) there is no standardized post-radical prostatectomy treatments or use of metastasis directed therapies, and (iv) it is not yet clear if the results obtained by radiotherapy can also be applied to a radical prostatectomy series. As such, there is a low level of evidence for surgery in this disease space, but it is still practiced.

The EAU 2021 guidelines give a strong recommendation to offer ADT combined with prostate radiotherapy (using the doses from the STAMPEDE trial) to patients whose first presentation is M1 disease and who have low volume of disease by CHAARTED criteria. Dr. Briganti notes that based on these statements, there is indirect support for the fact that the outcome of radiotherapy cannot be extrapolated to surgery due to the lack of evidence.

Over the last decade, there have been several population-based studies assessing the outcomes of radical prostatectomy in the setting of oligometastatic disease. Generally, the 5-year survival data in these population-level studies ranges from 55% to 70%:

Without question, there are limitations to interpreting the data from these population studies, including:

Similar to the population-level studies, there are limitations with institutional series:

In these patients with metastatic disease, should we be also targeting the lymph nodes? Data from the SEER database suggests that 199 of 330 patients (60.3%) treated with radical prostatectomy underwent lymph node dissection1. In this series, there was a significantly improved 5-year cancer-specific survival rate for those that received pelvic lymph node dissection in adjusted analyses (HR: 0.52, 95% CI 0.31-0.87; p=0.01): 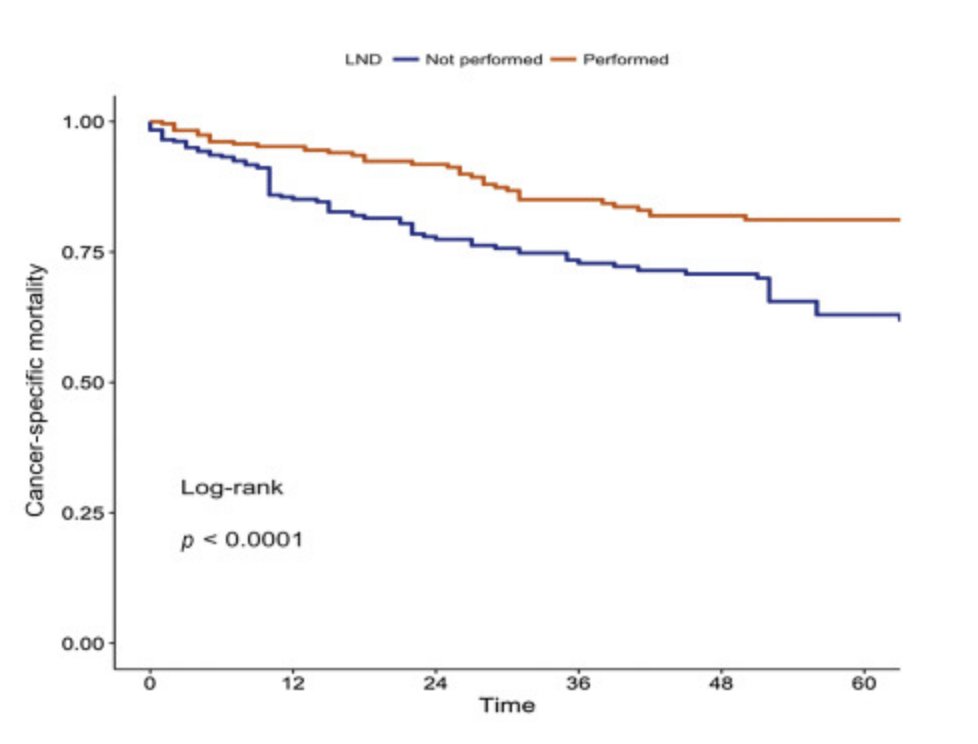 In the institutional series, the most common complications from radical prostatectomy include lymphocele (8.5%-13%), transfusion (7.9%-14%), and DVT (7%-13%), whereas urinary continence rates did not vary substantially from non-metastatic radical prostatectomy series’. In Dr. Briganti’s opinion, the following patients are the optimal candidates for surgery:

As follows is a list of the ongoing randomized controlled trials assessing surgery in the context of metastatic prostate cancer:

Dr. Briganti concluded his presentation by emphasizing that when considering surgery for patients with metastatic disease, this decision must be made in the context of good patient selection in experienced hands. However, cytoreductive radical prostatectomy should primarily be considered as an option for men with oligometastatic prostate cancer within the setting of a clinical trial.