(UroToday.com) It is now well established that PSMA PET/CT is more sensitive than conventional imaging. As such, PET/CT scan might lead to the identification of nodal metastases (e.g., cN1) in prostate cancer (PCa) patients considered for radical prostatectomy (RP). However, there are no data addressing the performance characteristics and prognostic value of a positive PET/CT in the nodes for the identification of men more likely to recur.

Despite the growing evidence on the accuracy of prostate-specific-membrane-antigen (PSMA) PET/CT, evidence on its clinical relevance as a primary staging tool is lacking. This study aims to evaluate the predictive value of suspected lymph nodes (LN) metastases on PSMA PET/CT for biochemical persistence (BCP) and early biochemical recurrence (BCR) following radical prostatectomy (RP) with extended pelvic lymph node dissection (ePLND).

All patients who underwent RP between September 1st, 2016, and October 1st, 2020 were evaluated. Men with newly diagnosed intermediate or high-risk PCa who underwent a preoperative 68Ga/18F-PSMA PET/CT and subsequent ePLND were included. Performance of PSMA PET/CT was determined on a per-patient level. BCP was defined as a first post-operative serum PSA level ≥ 0.1 ng/mL between 6-20 weeks following RP. Early BCR was defined as detectable PSA > 0.2 ng/mL ≤ 12 months of follow-up. Patients were grouped as PSMA- or PSMA+ depending on their LN status on PSMA PET/CT and subdivided according to histological LN status (pN) as determined by ePLND.

From 1058 consecutive RP patients, 213 met the inclusion criteria – which naturally includes some selection bias for men who received the pre-operative staging studies.

Results of PSMA PET/CT versus histological results of ePLND are presented in Table 1. Sensitivity, specificity, PPV, NPV and accuracy for preoperative detection of metastatic LNs were 29%, 83%, 33%, 80% and 71% respectively.

BCP was observed in 26 of 211 patients (12%) and early BCR in 23 of 110 patients (21%). The incidence of BCP and BCR for patients subdivided according to their PSMA and pN status is illustrated in Figure 1. 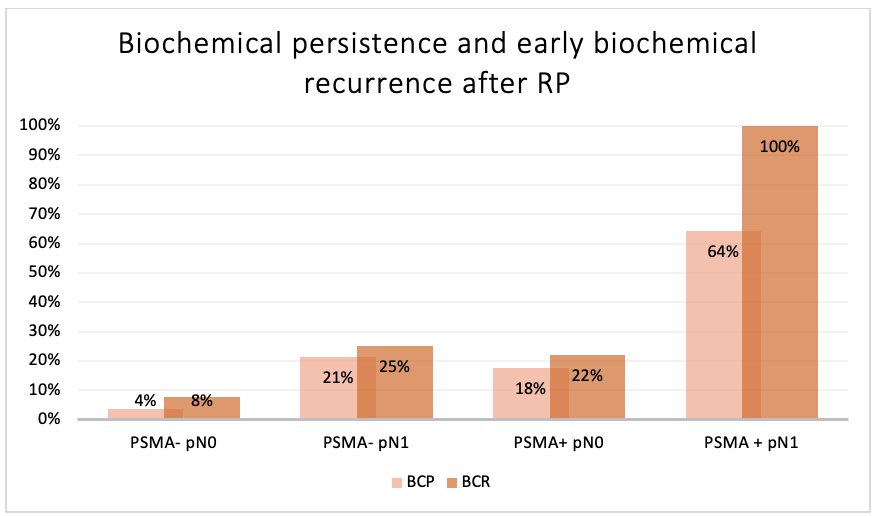 No correction was made for other risk factors. Patients with PSMA+/pN1 had a significantly increased risk of BCP and BCR compared with PSMA-/pN1 (p=0.004; p<0.001).